In the Slow Lane 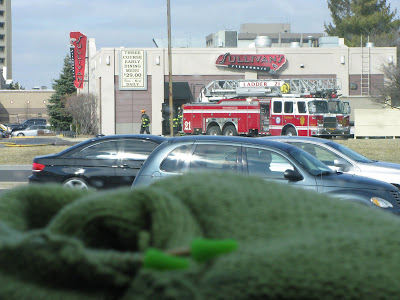 With the exception of a day or two when she has not felt well, Audrey gave up naps on Thanksgiving. Every once in a while, she will succumb to a long drive. This weekend, Jason needed to go into work for a little while. Audrey and I piled into the car with him. My plan was to drop Jason off and run some errands. Twenty minutes into our drive, I looked back to find Audrey asleep, lulled by the movement of the car or forced into relaxation due to the car seat straps. She was still asleep when Jason got out of the car and I switched to the driver's seat. I drove to a jewelry store that I've been meaning to visit for months to get a weakened necklace strand fixed. As I pulled into the parking lot, I noticed a firetruck parked at a restaurant across the street, directly across from my windshield. I looked in the backseat. Still asleep.
I can't tell you the number of times I've been in this position and thought, if she's that tired, she'll stay asleep when I pick her up and put her in the stroller. I think it's worked in my favor once. Out of habit, I almost followed suite, gathering my things together to get out of the car. Then I thought, why? I've waited months to come to this jewelry store. Is it going to ruin anything if we don't make it inside today, or if I wait until Audrey wakes up and this is the only errand on the list that gets completed?
I got comfortable in the front seat. I pulled out the bag of knitting supplies that I had brought along (the passenger seat of the car being the place where I get the majority of my knitting done) and a bag of chocolate-covered pretzel that Jason had given me that morning. As I knit another row on Audrey's someday-to-be sweater, I thought about how calming this quiet work was: slow, methodical, productive. Then, I looked out the window. Beyond four lanes of rushing traffic, firefighters were moving between restaurant and truck, between truck and well-dressed managers. Luckily, there was no ambulance on site or customers in the parking lot. As I watched the firefighters clean up, it struck me: that would typically be me. Don't misunderstand me, I'm not comparing myself to the brave ones in the black and yellow-striped jackets, but I often find myself rushing around putting out the small fires of my family: treating the boo-boos and calming the cries. Or, I am the one caught up in the four lanes of traffic, off to get groceries before Toddler Time at the library, seeing the day in increments of time rather than as a series of moments filled with people and environments that come together just this once, for just this moment. But Saturday, I was the bystander. For one hour, I was the one in the jewelry store parking lot, with the sleeping daughter in the backseat and the knitting in my lap. As I munched pretzels and watched those rushing around in front of me, I was struck by what an unexpected gift I had stumbled upon: Audrey asleep, restrained in her car seat and me, restrained by my sleeping child, just watching the day go by.
*Once again, I can't get the line breaks to show up where I want them - sorry this looks like one huge paragraph.
Posted by kristin at 8:32 AM