For Posterity's Sake: Week in Review 120 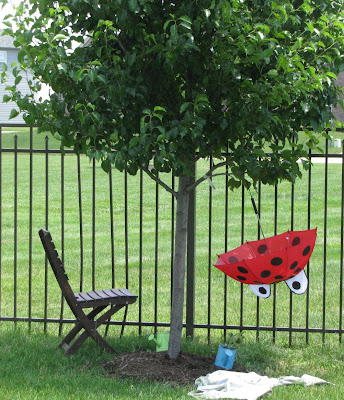 Audrey just propositioned me for a monkey. But Mom, our house would be its cage. But Mom, it could play with my toys. But Mom, a monkey would be excellent! These conversations lead to bargains. Let's buy an elephant. How about a giraffe? We could keep it in the backyard. A hippopotamus? A sheep? A horse? A pig? These negotiations lead to talks about the Home Owners' Association. I explain that while she sees our house as the perfect "cage" for a monkey and our backyard as suitable living quarters for (at the very least) a pig, others do not view the world through her lens. There's a lot of that going around. Audrey is developing a "world" view of her own. It may not seem cohesive to the rest of us. On any given Wednesday, it might include a pair of flowered shorts being the perfect hat for a sunny day and the branch of a pear tree acting as an acceptable umbrella holder. It's not always ideal. It may not make sense to the masses. But, it's always original, delivered with the kind of pluck that only a four-year-old can muster. And (luckily), she's more than willing to share it with the rest of us. Our moments, from the last few weeks:

The first week of June:

I try to keep the television off while the kids are awake. But, there is something about the nonstop feeding of a newborn that draws me to the couch - and the remote, especially on weekends. I think that Jason has the other kids occupied. I tell myself they aren't paying attention. I turn on HGTV and watch marathon episodes of House Hunters. Audrey plays between the kitchen and the family room, wrestling with Jason, clobbering any available brother, and creating chaos from everyday home furnishings. Midway through my second or third House Hunter's episode one day, she asks, "Why do they let people sneak in the houses?"

Later that week, I was putting Audrey to bed. Like always, we said a prayer. Unlike always, Audrey insisted that we pray for rhyming things. We thanked God for our nose and toes, dogs and frogs and polliwogs (okay, not really for polliwogs, but you get the idea). We try to take a little time to learn a verse or two at night as well. Apparently, Audrey thought she could put her own spin on the verses. That night, she thought she would just create her own. According to Audrey, John 14:6 says, And He will tickle us.

On Saturday, I was clipping coupons. Audrey wanted in on the action. She cut out coupons and any pictures that interested her. She found an ad with a picture of the world. "Mama, it's the whirled! It's the whirled! I want to cut out the whirled!"

On Monday, I think Nathan wanted to show that he's taking in a little bit more of the world (or whirled, if you prefer) around him, too, as he sat a book, opened to a picture of a bird, in my lap and said what sounded like a Nate-version of "bird". He hasn't said it since, but "ball" has become a vocabulary mainstay for our little guy.

Tuesday, after making a comment that proved Jason wrong, Audrey said, "I got you with that one."

The following day, she and I were building houses with Legos. After showing me her technique, she asked, "Now do you know the proper way to make a house?"

Saturday, while eating lunch, I was telling Jason about running into a friend who, seeing Nate for the first time, said, "Well, you can definitely tell who his daddy is."

I looked at Nate. He turned in my direction, smiled, and made a monkey face.

Monday morning, I caught Nate unwinding a skein of garden twine through the office and into the dining room. I told Nate "no." "It's okay," Audrey said as Nathan stomped exuberantly on the twine. "He's just making it pretty and clean."

Tuesday morning, Audrey and I were playing dress up. She placed a red wig on my head, along with my sister's wedding veil. Then, she tried to slide elbow-length child-sized gloves up my arms. "You're the God fairy," she said. "You're the Godfather." I believe I was supposed to be the fairy Godmother, but you can call me The Don.

We typically light a candle at dinner as something that sets that time apart as special family time. Tuesday, the older kids were having a sleepover at Grammy's, so Audrey wanted to light a candle at lunch before she left for the night. We had finished lunch and the candle was blown out. Audrey noticed the melted wax surrounding the wick. "What is the water?" she asked. I explained that when wax melts, it becomes liquid. "Oh! Liquid is inside of toads!"


Toads contain liquid that may or may not be related to wax. Scarface wears elbow-length pink satin gloves. Nate's newly acquired longer reach has him sneaking his fingers into the kitchen drawers and running through the house brandishing a turkey baster. When he stomps on things, they magically become clean. Jack is looking less like a baby and more like the boy he's about to become (and teasing us with the occasional smile). I haven't seen the tops of my counters in weeks. And this house, well, it might just be the perfect home for a monkey.
Posted by kristin at 10:17 PM No comments: