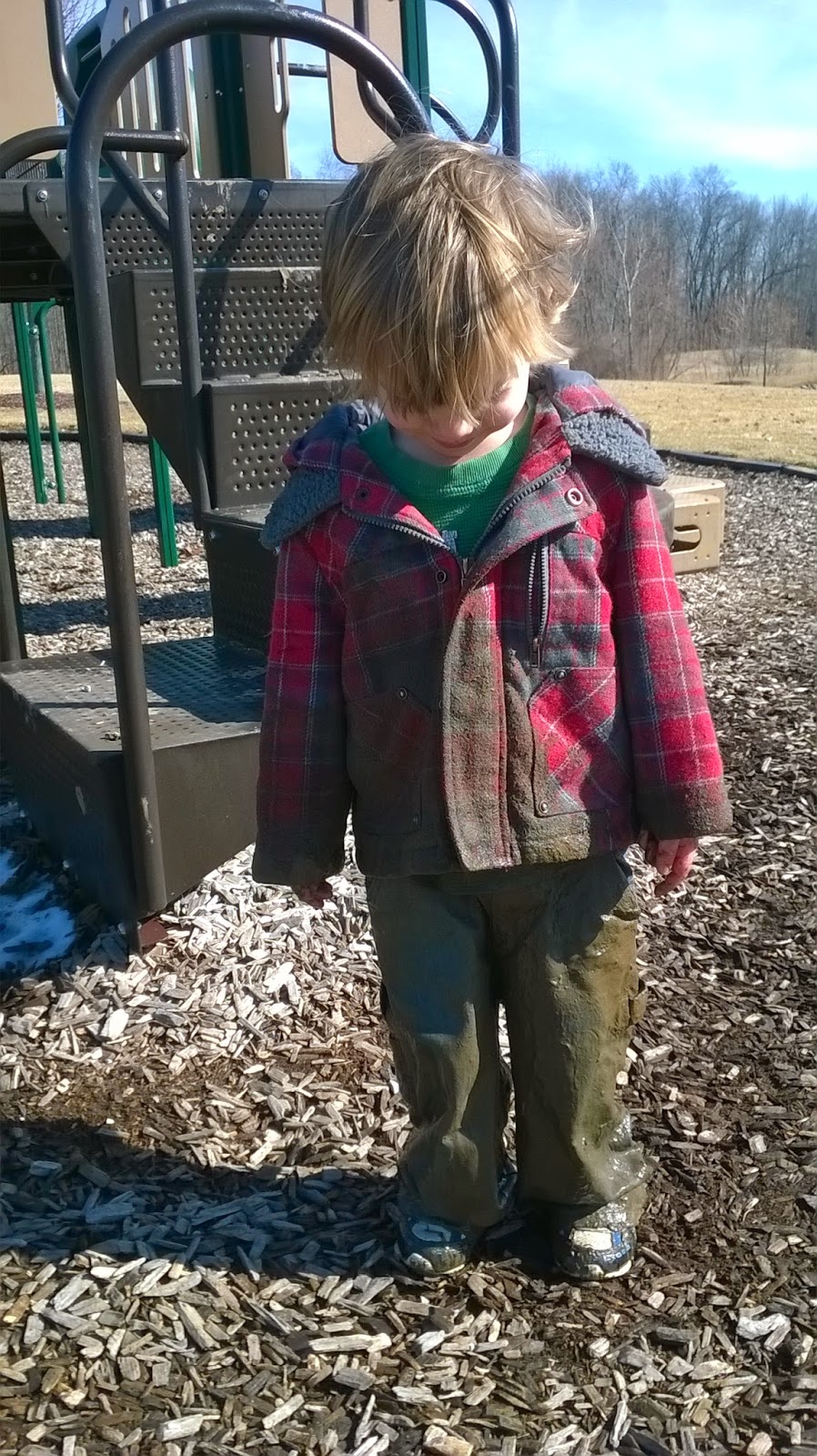 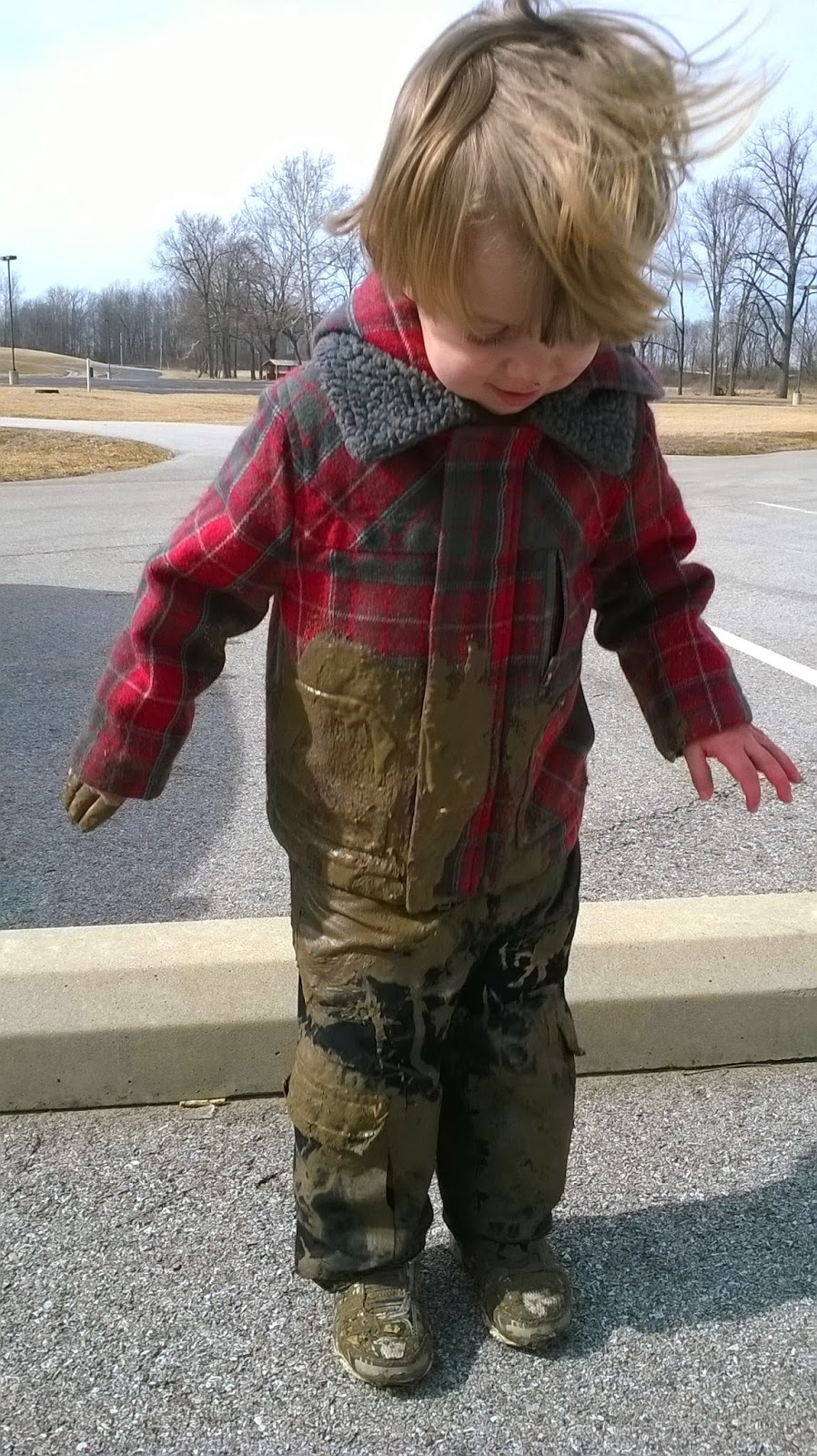 3.12.14
(Nate has an interesting technique for getting out of a snowsuit.) 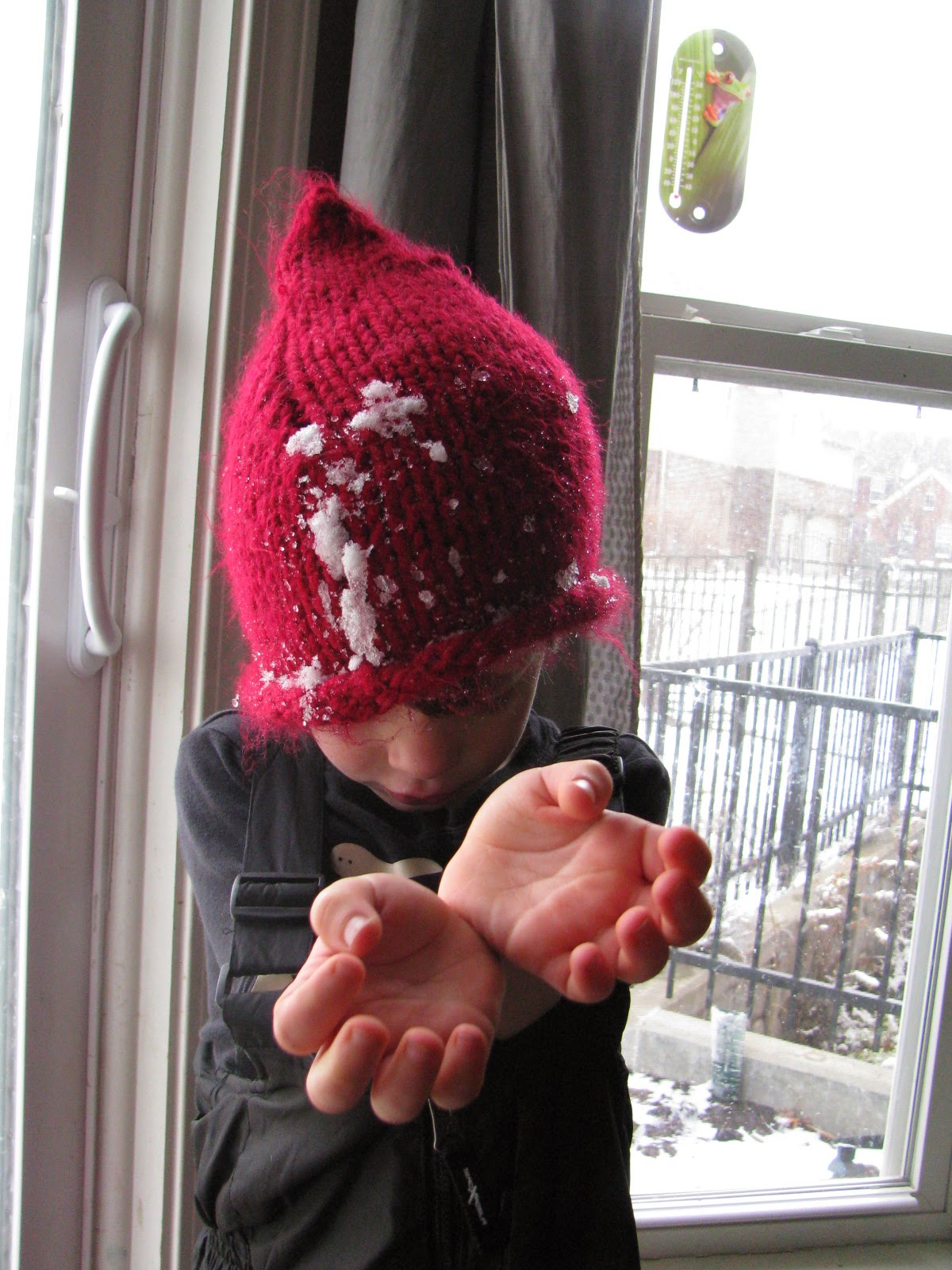 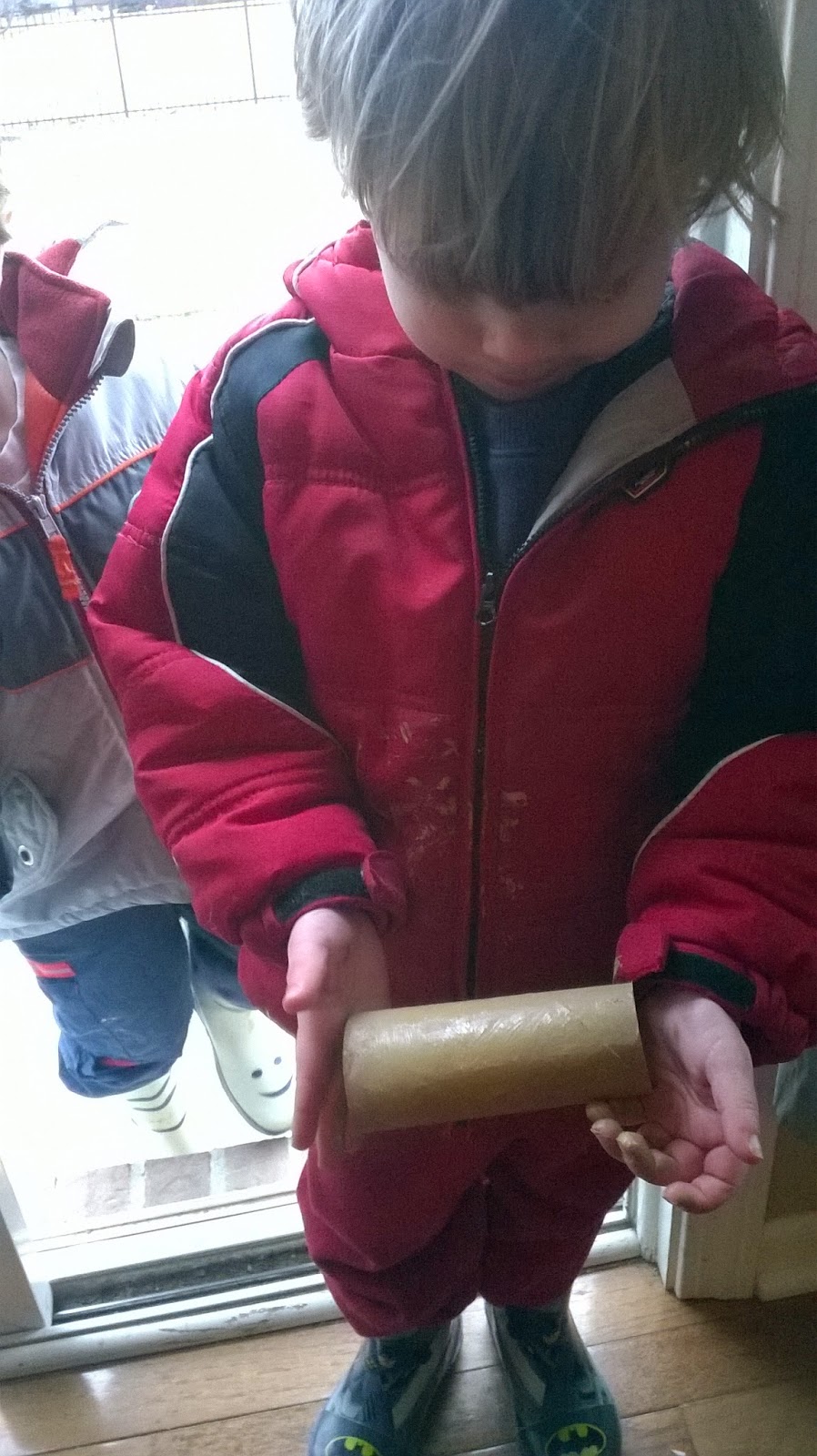 Just in case you've been wondering where I've been the last several days: doing laundry.  Lots and lots of laundry.  I think I'm caught up.  Until tomorrow.  It's official: spring has sprung.  Bring on the detergent.  ﻿

Posted by kristin at 8:21 PM No comments: 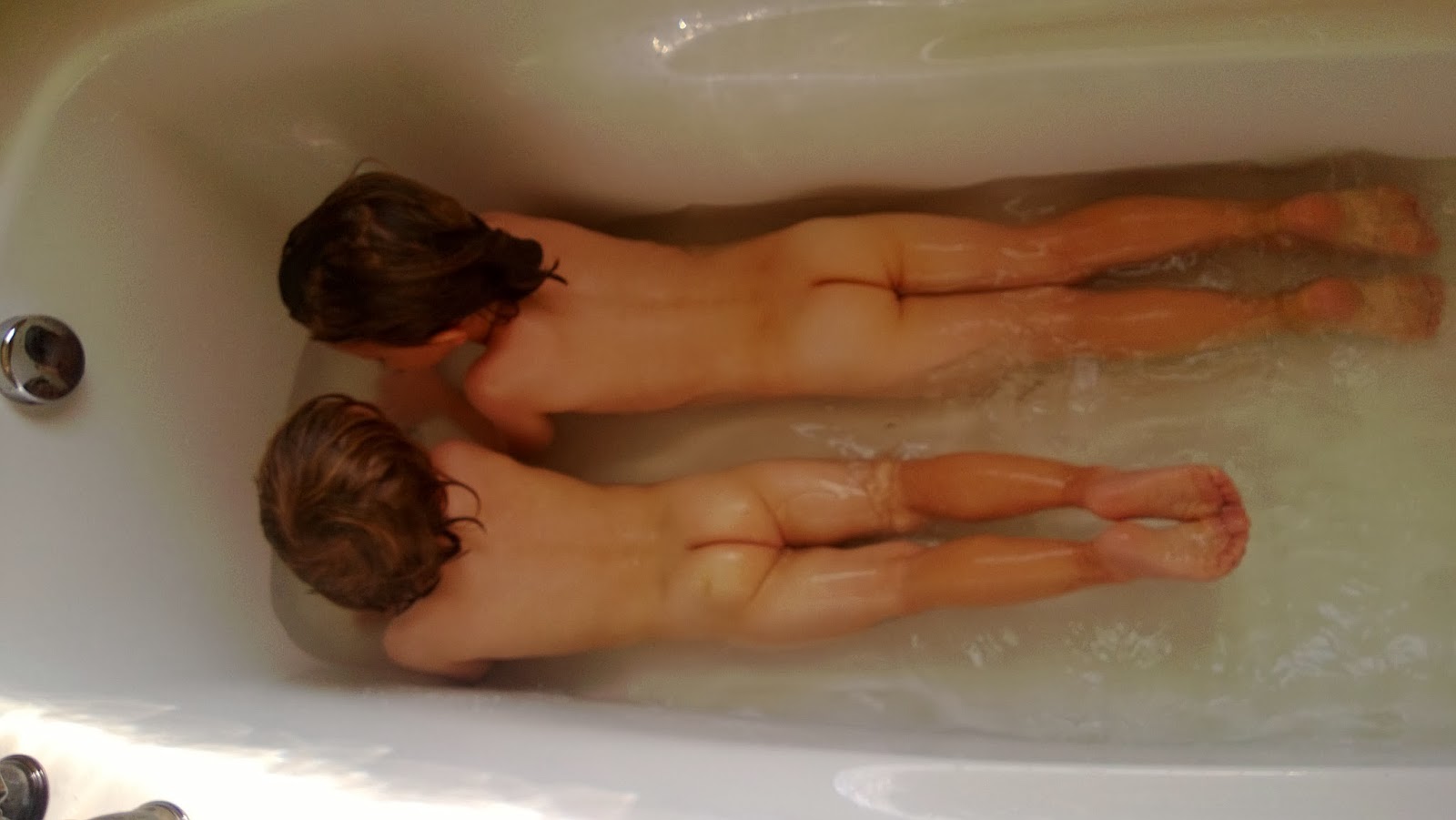 Someday, they'll kill me for this photo.  But not today.  Of course, they're brothers - the kind who know which stuffed animal will bring the most comfort, and how to torture said animal to elicit instant screams.  They might kill each other first.

Jason and I didn't walk the short road to parenthood.  Ours was three years long and dimly lit.  Some days, the only things linking us to parenthood were the words we spoke: about hurdles, possible solutions, hope.  Most days, our words dried up: browned leaves, crumpled and blown away.

Then, on a bright day after Halloween, Audrey was born.  Healthy and vibrant, she passed out her personality like free treats for the taking.  We were a couple of kids eager to fill our bags.  Soon, they were stuffed, full in places we didn't realize had been empty.

Cheeks coated in sugar, we were hesitant to talk siblings, the taste of dehydrated leaves still fresh on our tongues.  We liked living in the land of Counting Our Blessings rather than the Badlands. We almost decided to call it a family.  But we didn't.

Had I known the who(s) that awaited us at the end of that big, dark question mark, I would have plunged from that cliff head-first.  But I couldn't see the bare-bummed brothers bath time photo from the precipice, only the harrowing distance of the fall down.

Today, the boys are four and weeks-from three.  Their accumulated years are small, but their impact large.  After all, without them we wouldn't have these moments, scribbled and saved on scraps in the kitchen drawer waiting for a blog:


Nathan (legs under his covers preparing for bedtime, a puzzle piece held up to his ear): Audrey!  Audrey!  Why can't she hear me?


In the past year, the kids have been enjoying nursery rhymes.  Audrey checked a book of nursery rhymes out from the library and read them to Nathan.  They decided to write their own.  A game ensued during lunch in which each would take a turn creating and reciting his or her own rhyme.  If the other liked the rhyme, he or she would yell "Nice!"  If not, the listener would yell "Trash can!" (As in, I'm throwing your rhyme away.  Apparently, we're also into tossing out one another's artwork.)


Over the summer, Audrey would conduct "school" with Nathan.  One afternoon, I heard her yell that it was time for school.  Nathan, next to me and intrigued in his own project, yelled back, "I'll be there in two minutes.  No, five minutes, Auds.  Auds, I'll be there in eight minutes!"


Nathan had a paper shark that he folded in half and gave to Jack.  Jack put it in his pocket.  Later, Nathan tried to get it out of Jack's pocket and said, "It's broken."


Jack was singing one afternoon while standing next to Nathan.  The song contained two words, "Ella Bella," repeated over and over.

Nathan (looking at Jack, bewildered):  My name is Nathan.  Jack, did you forget my name?


One September afternoon, Nathan and I were reviewing an alphabet movie.  "The 'a' says what?" I asked.


Wednesday morning, Jack and I were making banana bread.  He mumbled something about being dangerous.


And, finally, some bathtub humor to bring us back to the photo at the top.

Jack (pointing to Nathan's nipple in the bathtub): Is that your belly button?
Nathan: No.  Those are my dots.

On a separate occasion, Nathan came out of the bathroom grabbing his testicles and asked, "Mom, what's in here?  My lungs?"


Maybe those boys are a little dangerous, at least to unaccustomed funny bones - especially when those boys travel in pairs.

Sometimes, being a fearless leader is more about donning a fuzzy horse's hat and planting yourself in the snow.  Or maybe that's just us.

Jason is our provider.  He provides the calm steady voice in a crisis, the biggest lap, and the strongest set of arms.  He also provides our daily humor, or at the very least, provokes it.

A few notes I ran across recently:

Jason was resting on the family room floor.  "I better go lay some grass seed.  But I don't want to get up."

"Well, it's your day.  You can do whatever you want," Audrey said.

Audrey snickered.  "If you trust me to do the grass seed."

Jason was making lunch while talking to Nathan.  "You're a turkey."

"You're a turkey, and guess what I'm having for lunch?" Jason asked, moved toward Nathan with his fingers curved into claws.

(Friday the 11th, month and year apparently not important enough to write down, but 2013)

Audrey: It's so nice out, too bad it's too wet.

(On a day Jason was preparing for an overseas trip, presumably after Friday the 11th)

Jason: Too bad I don't have another one of those (pointing to the new Surface he had bought me to replace my old computer) to take with me.

Audrey: Too bad you don't have another one of those (pointing to me) to take with you.

(A day in 2014.  I was cleaning out the pantry and overheard the following go down in the kitchen from my work - hiding - place.)

Jason (to Audrey):  If you do [garbled muffled garble]* again, I'm going to throw it off a high building.

Audrey:  Where are you going to find this high building?

*I have no idea what garbled muffled garble she was doing.  I do know that sometimes it's good to be the one snickering behind the closed door of the pantry, instead of the strong-armed one.  Or the one wearing the horse's hat.  And that we don't know what we'd do without our equine-wearing leader, except laugh less.

Posted by kristin at 7:51 AM No comments: