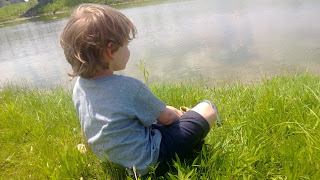 It's 4 o' clock and I'm curling my fork into a mess of tomato-spiked spaghetti, onions, and basil leftovers straight from the stainless-steel pot I heated it up in.  I'm not sure whether to call it or the teacup of yogurt tossed with blueberries and granola I had at eleven my lunch, and which one to deem as a snack.  It's summer and anything goes.  I'm finishing the spaghetti off with a handful of bittersweet chocolate chips.  Label them what you will, I'll just call them a little peek at heaven.
Summer is full of those little peeks.  I'm talking actual peeks here (although, my summer and palms have seen their fair share of chocolate chips this season).  Peeks at growth as your oldest tries to squeeze into a swimsuit from a year ago.  Peeks at adventure as your kids head off to the retention pond to try their hand at fishing for the first time.  And sometimes, peeks at the things you let slip during a busy school year as you crack open a "junk" drawer and find a mass of handwritten anecdotes meant for a future blog that never found its way.
My youngest is up to his elbows in the crisper drawer of the refrigerator.  I have precisely six minutes before he moves to lining my kitchen counters with every condiment within his grasp.  It's not a "write a full-blown blog" kind of day.  But as I read through the chicken scratch of notes I began compiling in March, I'm picking up on some patterns.  One major theme appears to be Nathan and food, or more precisely, Nathan's thoughts about me and food:
Nathan went through a phase in which he made requests by referring to his body.  For weeks, I was awaken by requests like, "Mom, my body wants celery and jelly."  Nathan's body had a penchant to the peculiar in the early morning hours.  (I gave him celery and peanut butter that morning.  Just in case you're wondering.)
One evening, I overheard him inform Jason, "My body wants apples, but Mommy's body forgot to buy apples."  (Mama's body is very unreliable.)
And now, a series of quotes from one week in March:
On Sunday: "Mom, when you eat ice cream, you want to keep your eyes open to look for cherries."
On Thursday:  Jason was working from home.  Nathan, the only child awake, was occupied.  I decided to take advantage and grab a quick shower.  When I came out, Nathan informed me that while I was busy, he found the chocolate chips and ate a bunch.
"Where is the bag now?" I asked.
"I'm not telling you.  I don't want you to take them and eat them all."
On Friday: Nathan saw the big bag of chocolate chips (rescued from his hiding spot) back in the pantry.  "You didn't eat them all!"
May 15th: Nathan was eating breakfast by himself as his siblings slept.  He heard Jack rattling the baby gate blocking his doorway.  He offered to go let him out and left the table.  Halfway out of the kitchen he turned back, "Don't eat my breakfast while I'm gone."
Clearly, a couple of months didn't do anything to change his perception of his mother as an eating-force to be reckoned with (or at least not trusted).  However, as much as he worries that I will eat the contents of the kitchen and leave him nothing but scraps, there is one morsel he's always willing to send my way: his bread crusts.  My children used to eat their bread crusts.  They didn't know that not eating them was an option.  Then, they went to grandma's house.  Grandma made them sandwiches.  She asked if they wanted their crusts cut off.  They thought this was a fantastic idea.  They never ate their crusts again.  (This has happened as mothers send their kids off to grandma's house the world over.  Frazzled mamas complain to said mothers about the good thing they had going.  Grandmas, seasoned problem-solvers that they are, buy those plastic do-hickeys that cut sandwiches into perfect butterflies or dinosaurs and stuff them in the grandkids' Easter baskets.*  The mama who created the do-hickey sends Facebook messages to all her grandma friends telling them that children of this millennia do not eat crust.  They believe her.  She is a millionaire.**)  Jason and I find ourselves floating in whole wheat crusts come lunch time.  We've switched to guerrilla warfare tactics.  He's begun to tell the kids that the crusts are magic, that to grow big and strong you need to eat the magic.
May 21st: "I don't want to eat the magic."
But he does want to eat everything else.***  Before I get my hands on it.
* We love you, Mom, and the plastic dinosaur do-hickey.  Nate tells me he'll eat his crusts when he's eight.
**This story is completely fabricated.  But it sounds true.
***Except tomatoes.
﻿ 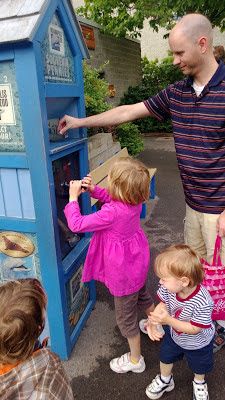 We finished kindergarten on a Sunday this year with one last field trip: a celebratory family outing to the zoo, complete with a commemorative smashed penny.  The machine we visited offered a selection of four pictures for your penny-smashing pleasure.  Audrey chose a dolphin.  Jason set the levers to point to "dolphin" and Audrey wound the gears.  Her flattened penny clanked into the dispenser.  She pulled it out to admire the machine's handiwork and found herself face-to-face with a walrus.  I found a new penny.  Jason put it, with fifty cents, into the dispenser.  He set the dials.  Audrey cranked the machine.  Her penny clanked.  It was a walrus.  It just goes to show you: sometimes, you think you're going after a dolphin, but you end up in possession of a walrus.  Kindergarten: it's not all about reading and arithmetic.
Here are a few other things kindergarten was about this year (or at least, a few of our most memorable moments):
﻿ 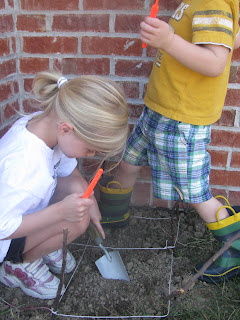 When I asked Audrey what her favorite thing about homeschool was this year, she said, "I like trying to impress you with my handwriting.  I like trying to make you proud."  She succeeded in her endeavor, but when I look back to what she enjoyed most about school I'm reminded of introducing her to archaeology.  We studied Ancient History this year and began the year with a discussion of why we know what we do about history.  We attended a homeschool class led by an archaeologist at The Children's Museum.  Then, we conducted a little "archaeological dig" of our own - in our backyard. 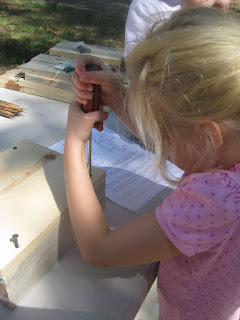 We spent the first half of the year studying animals for Science.  One of our favorite weeks was spent studying bats (including experiments on sonar, a toothpick-and-construction paper diagram of a bat, and bat crafts).  The picture above shows Audrey building a bat box at a local Parks and Rec event that week. 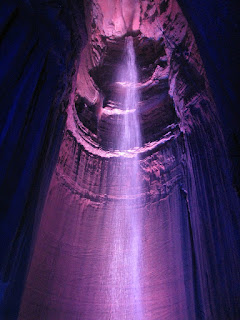 The picture above was taken at Ruby Falls.  Two things: 1) This field trip really didn't have much to do with what we studied in kindergarten, since we'll cover Earth Science next year.  2) It's highly likely that this field trip will stay fresher in my mind than Audrey's, as I will always remember it as the day Jason grabbed Nathan before he finished scaling the railings of a lookout point atop a cliff.  When I look at that picture, I see a lightening bolt and my heart begins those tap dancing palpitations that signal cardiac arrest could be in my future.  3) Not all the things you learn in kindergarten are fun facts, such as bats can eat up to 600 mosquitoes an hour.  Some are more terrifying and practical in nature, like learning first-hand why Eddie Bauer makes monkey-themed leashes for children.  4) Sometimes, your teacher tells you she's going to teach you two things.  Then she sneaks in two extras.  (P.s. Audrey loved the field trip.  She spent the tour at the front of the line, holding hands with the geologist and asking her questions.  The rest of us heard several laughs from up front waft to the middle of the pack where we walked.  Later, our tour guide informed us that Audrey was assisting her in keeping things light by adding helpful comments like, "I'm glad I'm not as big as some of the people down here" when we had to squeeze through a section of the cave dubbed "Weight Watcher's Pass.") 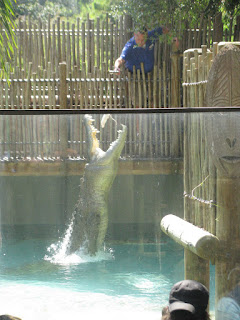 We happened to be visiting dear friends in Jacksonville a week after studying alligators and crocodiles, so our families loaded all the kids into two cars and headed to St. Augustine Alligator Farm.  We watched the largest alligator at the farm get its afternoon snack of rats.  It was a lesson in the food chain, and that high jumpers can come in unlikely packages.
We're technically in our third week of summer.  We've settled on a rare day of summer in which our first event on the family calendar takes place at 6 pm.  Audrey has spent her morning in the center of a pool of library books, wearing a pair of flowered pajama pants that look like capri pants.  The legs hung to her ankles last year.  She's stretching out - in every possible way.  I don't know what she'll take with her from our kindergarten year.  She learned to read and perform simple addition and subtraction.  She read about Sumerians and Egyptians and Phoenicians.   We attended Parks and Rec programs on Squirrels, Beavers, and Foxes.  We performed experiments in the bathtub.  We caught a children's opera and a performance of The Nutcracker.  We forgot what a clean house looks like and remembered what it felt like to take our history book out to the hammock and spend a day lost at the library.   We stretched.  We grew.  We forgot our manners sometimes.  She helped me, and I helped her, get a little closer to who we were intended to be.  Kindergarten: 2012-2013.