For Posterity's Sake: "Week" in Review 125, or Boys Without Pants 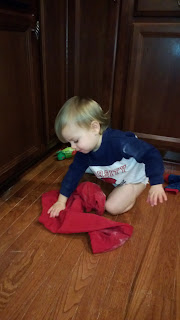 Sunday, the boys found me making muffins in the kitchen.  Nathan grabbed the footstool and soon the boys were jockeying for toe space and swats at the mixing bowl with the big silver spoon.  The floor caught a dusting of flour and cornmeal.

Muffins in the oven, I relieved the boys of their footstool and swords spoons and began piling dishes in the sink.  I looked to my right.  Jack sat, pantless, in the pile of flour wiping it up with his discarded pants.

I understand the inclination to multipurpose.  I'm not surprised my little ones find it so easy to turn one thing into another, being such shape-shifters themselves: lion to lion tamer, student to teacher, serious professional to comedians.  Actually, always comedians.

Some of our other moments from the weeks past:

Audrey was quite the character angel in the children's Christmas program at church.  Back at home, she asked Jason who was the prettiest in the program.  He said that all the kids were pretty.  Audrey repeated the question.  Jason repeated his answer.  This continued for several minutes as Jason insisted that all the kids in the program were pretty.  Then he walked downstairs.

"He doesn't seem to understand what 'prettiest' means," she said.


Audrey put on a Christmas puppet show one night using clothespins for the Wise Men and baby Jesus, a cardboard house she'd crafted for the stable, and a star taped to a straw, illuminated by a flashlight.  She reenacted the story of the Wise Men traveling to bring gifts to the Christ child.  Jason asked if she remembered what the Wise Men gave Jesus.

"Sure," she said, "gold, myrrh, and Frankenstein."


Jack has a tendency to push his food away at dinner, or give it away by tossing it to the dog.  He was up to his normal tricks one Tuesday at dinner.  (Jack, that is, not the dog.)

"He's steadfast," I said.
"That's a good word," Jason said.
"From now on, I'm not stubborn.  I'm steadfast."
"I'm going to use that on my next PM (Performance Management) review."
"When I stub my toe, I'm going to be stub-fast," said Audrey.


The week of Christmas, I found Audrey scrounging around for scotch tape, an empty toilet paper tube in her hand.  "It's going to be his (Nathan's) birthday present, so be still about it."


One Sunday, we were preparing lunch after church.  Jason turned on the television to catch the beginning of the Colts game.

"Oh, today is that boring day where we watch football," Audrey said.
"Tell me how you really feel," said Jason.
"I really don't like it."
"Yeah, I got that."


On Monday, Audrey shooed the boys out of the kitchen, instructing Nathan to take Jack to the playroom.  Nate obeyed.

"Now that they're gone, we can talk," she said.
"What do you want to talk about?" I asked.
"How about fish.  Tell me everything you know that other people don't know about fish."


We had a rowdy crew on our hands at dinner one night.  Jason asked them to settle down and eat so he wouldn't have to raise his voice and "get mad at them."


Jason to Nathan: Do you know that sometimes I have no idea what you're saying?
Nate: Uh-huh.


Nate helped me make crepes one afternoon.  The milk had to be poured into the batter a little at a time.  Nathan wanted to dump it in all at once, so I explained that we couldn't.  "Wait while I read the directions," I said.

Two minutes later, I saw him peek at the recipe, grab the bowl of milk, and pour it in.  "Don't worry," he said, "I read the directions."


One afternoon, Nathan came to me, eyes the size of craters, with Audrey following sheepishly behind.  "You put me in the trashcan?" he asked.

I put a hand on each of his arms and looked him in the eyes.  "Would I put my sweet bear in the trash can?" I asked.

"You put me in trashcan?" he asked again. (Read: Yes, Mom.  I absolutely believe you'd put your sweet bear in the trashcan.)

I assured him that I would not toss him in the garbage.  He looked back at his sister, an alligator smile slung across her face.  He realized he'd been had.

A while later, Audrey and I were parked on the couch reading.  She asked Nate if he would bring her some Kleenex so she could blow her nose.  Nate returned a few minutes later holding the stiff paper that had been shoved inside his father's new tennis shoes.  He laughed as he handed it over.  Audrey laughed, too.  "That was much funnier than the trashcan," she said.


Lately, Nate has been scared of going to sleep in his room.  He won't leave his bed (because his father told him not to one night), but we will hear him sobbing against his pillow ten minutes after we put him to bed.  One of us will check on him and get a report of what is frightening him that night: dragons or dinosaurs or bears.  One night this week, it was my turn.  I asked why he was crying.  He admitted a fear of cows (attacking him under the cloak of darkness, I assume).

"Honey, cows are good.  You get your milk from cows.  You get ice cream from cows.  Nate, you want a cow in your room."  He went right to bed.  I credit the cows.


Tuesday morning, Nate woke up and came into our master bedroom.

Never knowing Jason to mill around not wearing pants, I was a little confused.  "Pants like these?" he asked, pointing to the yoga pants I was wearing.  (Technically, they double as my pajama pants, but that's a story for another time.*)

"He probably is wearing pajama pants."

The next morning, Nate woke up and ran downstairs right as Jason was leaving the house.  Jason poked his head back into the kitchen to tell him goodbye.

No son, we don't multipurpose quite that far. 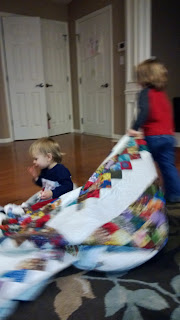 The boys displaying their ability to multipurpose:
family heirloom/mode of transportation (Jack lies on
the quilt and Nate pulls him around the kitchen floor, taking
corners as fast as his legs will carry him.)
* Another time: The Tale of  the Multipurposed Pants
I used to wear pajama pants to bed: regular, run-of-the-mill black, cotton-jersey pajama pants.  They were comfortable.  They were old.  Very, very old.  One morning, Nathan "Houdinied" his way out of the house and I had to chase him down in said pants.  A few weeks later, Jason walked up behind me while I was wearing the pants.
"You do know the butt of those are bare, right?"
As he described my underwear, I immediately thought back to my dash down the sidewalk, as I assured him that no, I don't willingly and knowingly walk around in threadbare pants.  Then, I threw them out.  Santa tucked a new pair of "pajama" pants into my stocking this Christmas.  They are yoga pants: thick and holeless and perfect for chasing runaways down the street.  Like I said, multipurposing: I understand the inclination.    ﻿
Posted by kristin at 10:45 PM 4 comments: