Stuck in the Middle, and Two 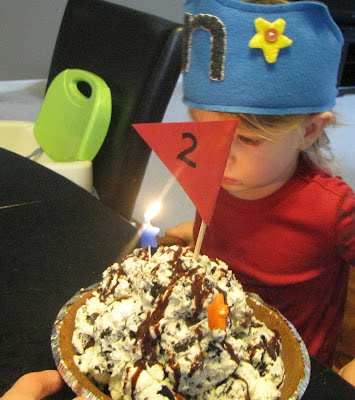 I have been lax in my posting. So, rather than attempt a typical Week in Review, I thought I'd do a little update on each child and who he/she is right now - beginning with Nathan. Because, sometimes, you just have to begin in the middle.

Nathan rang in the end of 2011 by turning two, landing him squarely in the phase I refer to as "Game On!" (No. No, I do not really say this out loud in the presence of others. I say it in my head, which makes me appear much saner.) If Nate joined an Indian tribe, his name would be Boy With Many Hands Who Moves Silent like the Night. If he were a movie title, it would be Chaos Unleashed. If he were in prison, he'd be kept in "the hole" to keep the other inmates from getting any ideas. If he were in the circus, he'd be a star.

You see, the boy knows tricks. But, more importantly, he knows how to set a scene. It's dramatic to break down the baby gate guarding one's bedroom door. But, it's much more dramatic (and devious and beneficial to further schemes) to break down one's baby gate while one's father (and baby gate ninja-master) is in Japan, leaving your baby gate-handicapped mother at a disadvantage. Said gate-challenged mother might attempt to fix the disassembled gate before deciding to rectify the Babies Gone Wild situation by other means, namely, a filing cabinet and night stand pushed flush with the door. This will work. For one night, after which, the smarter-than-his-mother two-year-old will teach himself to climb over the makeshift baby gate. His mother will discover this the next morning when she is awaken by a thud downstairs - where no one sleeps and, therefore, no one should be. Luckily, God will give her the good sense to recognize the sound as thump of milk jug against hardwood before she scrambles under the bed for the mammoth walking stick (a.k.a. club) her husband purchased from a Jamaican artisan on their honeymoon, and tries to get her jiu jitsu on.

That's how my little man likes to begin his days, with a nice dose of dairy: two-percent, minus a crazy stick-toting mama.

Other things he enjoys right now:

Rearranging the contents of the refrigerator. Particularly the condiments.

Taunting his mother by running through the kitchen with raw eggs (collected during food stuffs reorganization sprees). And, on one occasion, biting into the Nate-napped egg in a last ditch effort to keep it from his mother's hands. (The egg carton has been permanently relocated to the refrigerator's top shelf.) 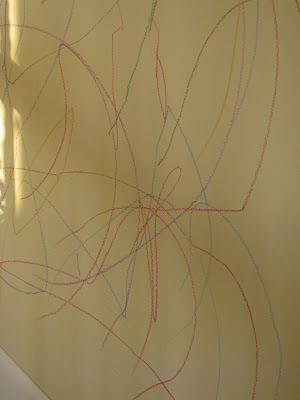 Creating artwork (on the walls, the chairs, the tub and tile) with the fallen wax soldiers his big sister leaves behind. (The crayons have also been moved to a high shelf, and all but the dry-erase ones replaced with more just-in-case-Jack-eats-one friendlier soy ones.)

Climbing into Jack's exersaucer and bouncing joyously up and down, until he realizes he can't get himself out.

Unrolling the entire roll of toilet paper in an attempt to stuff the porcelain bowl before being interrupted by his mother.

Using clean dish towels and shoving the dirty ones back into the drawer.

Houdining his way beyond the baby gates and deadbolt and out into the neighborhood, preferably to any yard with a swing set. (The front door is now equipped with the mother-of-all childproof locks. Now, no one can get out. Or in.)

Climbing the grape trellis and flinging himself over the five-foot fence to escape to the neighborhood common area. (We no longer have a trellis. Or a grapevine.)

Building Lego towers with his sister and knocking them down before she's ready, affording him an eighty-percent chance of getting beaten up before noon. (Audrey has been reminded - again - of the rule that she may not hit her brother. No matter how misguided his taste in architecture may be.) 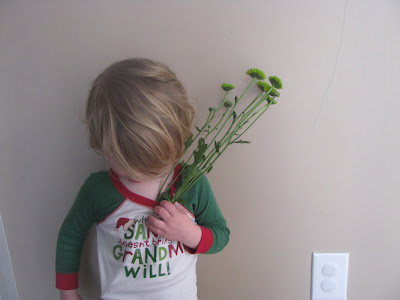 (photo by Audrey)
Creating his own take on the English language. Nate has dubbed mandarin oranges "Nemos", and seems to have no problem devouring them, despite his passion for a certain short-finned fish. His father, displaying the power of a Transformer to shift his persona, is now "Babby" (Buddy + Daddy).

The power of a "magic" kiss. This one believes, I tell you. Down deep. I have woken to a wailing boy passing an injured index finger through the bars of his baby gate (how he injured a finger in his sleep he has yet to reveal) at 4 a.m., begging a kiss. One kiss and the boy turned around and put himself back to sleep. Really. What about those instances when a parent can't be reached quickly enough for a magic kiss? Nate's not above kissing his own knee or foot. I've seen it. He's self-sufficient, this one. And flexible.

Covered arms. Nate has a casual style that matches his easy-going attitude, with the exception of one thing: his sleeves, which must remain down at all times (while washing his hands, while eating spaghetti, while painting). 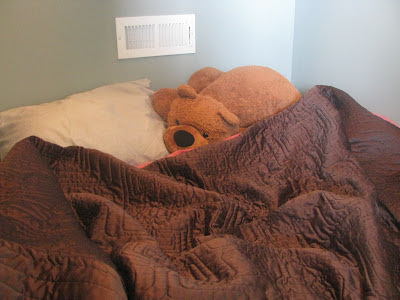 Sleeping in his closet. Nathan has developed a fear of what may be just outside his window. We had a few stormy nights, and the wind played against his walls like a battering ram. He began to panic at bedtime. We would find him wearing his sheets tight against his head like a shroud, always pointing to the window when we unwound him. Jason covered his blinds with a dark sheet, hoping to blot out the monster behind the pane. But minutes later, I found him crouched on top of the windowsill, nose against the glass, sobbing. We tried to let him sleep in Audrey's room - to the detriment of her bathroom (and the waterlogged baseboards). We tried to move Jack into the same room as Nate - to the detriment of Jack (who did not expect a crib hijacking midway through the night). We hoped the return of nice weather would ease his mind. But when we checked on him, we couldn't find him - until we opened the closet. We moved him back to his bed. We found him back in the closet. The closet is now outfitted with pillows and blankets. He prefers to sleep there with the door closed. Lights out. I can't say I blame him. I tried it out once. It's cozy. And has great acoustics. 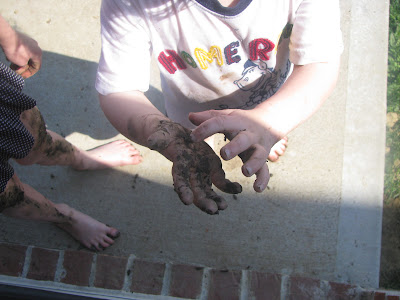 Two is a little like that. It's about cozying-up to your new-found abilities and trying them on for size. It's finding your place and leaving a dent (or red crayon mark). It's noise and devious silence. It's two hands (refusing to roll up their sleeves) introducing themselves to the dirt and showing him they've come out to play. Game on.
Posted by kristin at 5:37 PM 3 comments: