For Posterity's Sake: Week in Review 10

This week was an adventure in food, and ahem, food styling. 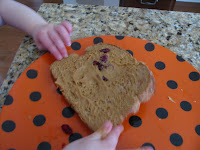 There was the first sandwich Audrey made all by herself: peanut butter and dried cranberry; 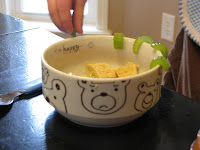 the celery that she thought served her soup much better as a garnish; 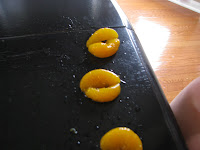 and the oranges that she paired up before informing me that they were circles and asking that I take their picture.
But my favorite story of the week starts at the very beginning, on Sunday. Late in the afternoon, Audrey asked to watch one of her favorite movies. I agreed, but could not find the remote and asked for her help in locating it. She couldn't find it, either (later it was uncovered from beneath a sofa cushion), so I resorted to pushing the buttons on the DVD player to get the movie started. She saw the film begin to roll, ran to the couch and began clapping while yelling, "Yea! Mama fix it. Good girl!" I laughed, thinking how blessed I was to be spending what was going to be a crazy week with such a cheerful companion. A little positive reinforcement goes a long way.
I hope you have each had your own cheering section helping you through the week. Have a great weekend!
Posted by kristin at 2:15 PM