For Posterity's Sake: Week in Review 11 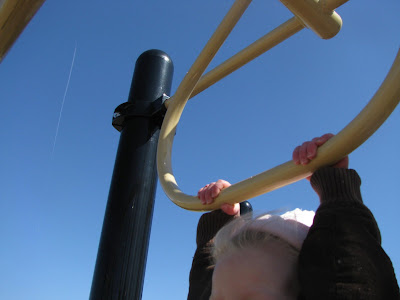 On Tuesday, we were visited by dear friends who live in Florida. Turns out, their three-year-old is a lady-killer who Audrey spent the evening showering with hugs and kisses (not that I blame her, it's hard to resist those blond curls and big brown eyes). But we had yet to see her take so instantly to a friend before.

Last night, Audrey tore down the hallway in the dark, right into a baby gate. Upon impact, she bit hard into her lip in two places. The pain, and tears, were instant. I cleaned her up, calmed her down, and sent her on her way, ice cube in hand to numb her broken lip. She came back moments later, crawled into my lap and said, "Mama, Audrey be ok."

Today as I began writing this, she sat beside me singing her own made-up songs and talking quietly to herself about things I couldn't understand. I realized that there are many things I can't touch without her granting me access: her thoughts (some that she desperately wants to share but doesn't yet know how), the connections she feels to others, and the roles she feels a responsibility to play (even if the role is as my comforter). As much as I admire her fiercely independent spirit and her plucky determination, I hope that she does grant me a little time each day to hold her close, squeeze her tight, and touch her heart. And a little bit of access into those thoughts she's having so I can know her better, well, that would be nice, too.
Posted by kristin at 3:19 PM