For Posterity's Sake: Week in Review 12 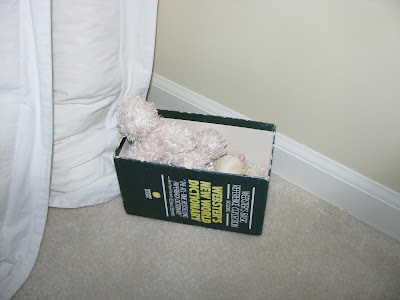 Lost and Found and and Proper Nouns:

On Monday, I found lamb resting comfortably in the box that normally houses my dictionary, thesaurus, and synonym books. Audrey likes to put her animals to bed inside various containers she finds around the house. Usually she covers them with something (a lid, book, dishcloth, etc.) to serve as a blanket. Luckily, I found my missing dictionary and its companion books unharmed, scattered across our desk.

Tuesday morning, I heard Audrey in her crib calling out, "Daddy, daddy." Unfortunately, Jason was no where to be found, having already left for work. Not knowing this, Audrey continued her attempts to call her Dad, each attempt more elaborate than the last: "Daddy!" "Daddy are you?" She finally resorted to yelling her version of his full name (swapping out Jason Correy for Daddy Paige since she thinks that everyone's middle name is Paige) as if he was not coming simply because she had not been specific enough and he was merely confused.

Two weeks ago, after Jason returned from his San Diego trip, he realized his watch was missing. It's not a watch Jason picked out for himself, and I don't know that had he been picking out his own watch, he would have selected this one. It was an award, given to the top sales representatives (based on performance and leadership) in the country. Jason won it his first year on the job. He only wears it when he dresses up - and he took it to San Diego. He said he thought he had remembered wearing it somewhere that seemed out of place, with short sleeves instead of a dress shirt. We searched the house. He said, "You know how many times I've almost lost that thing? It's amazing I've kept it this long." I called my parents. They searched their house. He said, "It's just a watch."

And it is. It's just a watch - some metal, gears, and glass. But as we continued to look, I wasn't thinking about the watch. I was thinking about that first year: Jason's first year at his job, a move to a new state, our brand-new marriage. I remember waking up one morning to realize that Jason had not slept, but had spent all night laying in bed strategizing about better ways to run his business. This happened several nights that first year. Often, long days were followed by working nights. At one point, I remember Jason being reminded by his boss to take his vacation days. I also remember the excited call from a hotel room in Chicago as Jason told me he had won this award and two others (and the audio tour that followed as he described every detail of a hotel room that he said he wished I could see). I thought about the trip to Hawaii (also part of the award) - the place I had been saying I had always wanted to go - and pinching ourselves as we ordered room service - ROOM SERVICE! - for an ice cream sundae and french fries. We spent the week meaning to relax, but trying to absorb every part of the island we could (hiking the rainforest, kayaking by sea turtles, me running along the beach) knowing that most likely, we would never make that trip again. So it is just a watch, and maybe a bit more. And as much as Jason tried to put its loss in perspective, I couldn't get it out of my mind. 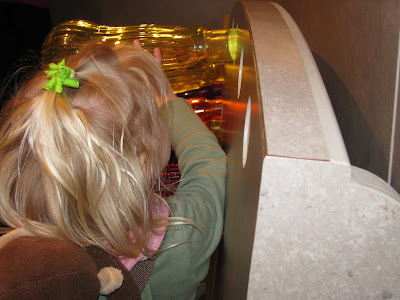 But, time moved on and Wednesday we had plans to go to the Children's Museum with Jason's mom. During the week, I carry a big bag: a bag that things get thrown into more often than they get taken out. To go to the children's museum, I like to take a small backpack filled only with the essentials. I was grabbing a few items out of the behemoth bag (and talking to Jason on the phone) when I noticed a small glint of gold in the pocket I was rifling through. I gasped. The watch (which Jason had tossed in there unbeknownst to me and then quickly forgotten in his jet-lagged state) had been with me all the time.

The mystery of the watch solved, Audrey enjoyed a day at the Children's Museum with her Grammy. Normally, she is drawn to a few specific areas (the dinosaur exhibit, any exhibit that contains water, the carousel), but this time she found a new area of interest, plastic shapes meant to mimic the artistry of Dale Chihuly's Fireworks of Glass, his largest permanent blown glass sculpture.

Wednesday night, I woke to a sore throat, which sent me out the door Thursday morning en route to the doctor to cut any major sickness off at the knees. Upon seeing the exam table, which looked like some sort of jungle gym equipment from her vantage point, I'm sure, Audrey decided it was her doctor's appointment. When I informed her that it was mama's appointment and that she would not be climbing up on the table, Audrey took matters into her own hands. She introduced herself to the doctor (giving her full name, of course) three times. She also threw out other vital statistics, such as her age, all in an attempt to bogart the exam table. I did let her stop at the nurses' station on the way out to measure her height. She's an inch shy of being three feet tall! Three feet tall! We made it out of the doctor's office with a prescription, but not our sippy cup, which tends to be the item we lose most often.

Today, we made a quick trip to the library. Audrey loves to play with a train set in the children's section. Most days, we have the train set to ourselves, but today we were sharing it with another little boy around Audrey's age. Using their library cards a collateral, kids can check out Thomas the Train sets to use on the library's tracks. Audrey has never seen Thomas the Train, but the little boy she was playing with has. In an attempt to play with her, he scooted one of his trains close to hers and said, "Hi Thomas." She said, "No, I Audrey."

This has been an interesting week. Valuable things were found in places we wouldn't normally think to look. I had been hoping to spend part of this week working on Easter projects or 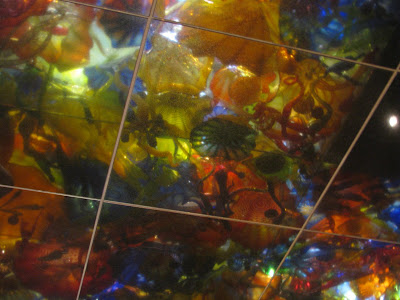 Fireworks of Glass reflected off the floor of the Children's Museum

planning our garden. But I lost some of that project time and found some unexpected rest when my body declared a vacation day. As I settled onto the couch, Audrey at my feet, feeling a little guilty for letting her watch another movie, I saw these words pop up on the tv screen:

According to all known laws of aviation, there is no way that a bee should be able to fly. Its wings are too small to get its fat little body off the ground. The bee, of course, flies anyway. Because bees don't care what humans think is impossible.
- Bee Movie

Things are found in small and unexpected places. Even words of wisdom. Even when you are lying sick on the couch and feel like your swollen ears and tired eyes can't take them in. I hope you find something wonderful this weekend. Or even better, spend it not caring what humans think is impossible.