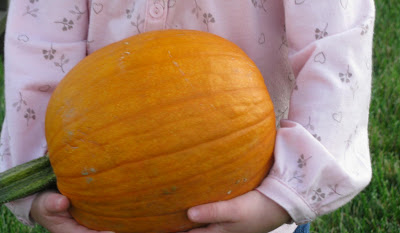 Last summer, we grew our first family garden. We started late, in June, after most of our gardening neighbors had already begun to harvest greens and radishes. But, I had this dream of a little raised wooden bed and dreams die hard, especially when an empty yard is involved. Jason jumped on board, turned my sketch of a simple raised bed into a two-tiered Barbie Dream House of a raised bed and helped me build and fill it with what gardening center leftovers we could find. We planted sugar pie pumpkin seeds around the perimeter of the garden. To say they took root would be an understatement. To say they took over, well, that's a little more accurate. We harvested several small pumpkins. In November, I roasted a few, scooped out the baked insides, and pureed them in the food processor. I froze the pureed pumpkin with hopes of making pumpkin pies. Unfortunately, I've yet to find a pumpkin pie recipe that agrees with me. (So if you have a foolproof one - and I mean FOOLPROOF, send it my way). Regardless, no amount of kitchen blunders or lack of culinary pumpkin pie mojo could quell my desire to try out the fruits of our summer labor. So, today, Audrey and I donned our aprons and finally got down to business making some Maple Pumpkin Bread (you'll need to scroll down the hyperlinked page a bit to find the recipe). 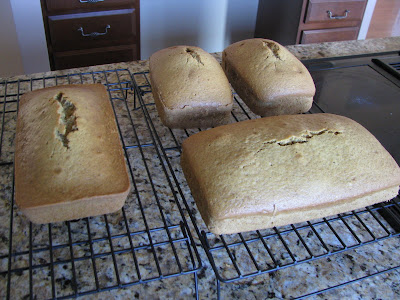 I have used this recipe several times using canned pumpkin. It calls for three cups of mashed pumpkin, but I thought I'd give it a try with our pureed sugar pie pumpkin. The results? Well, this recipe and I get along just fine.* 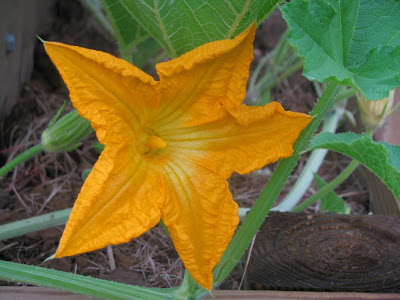 But the best thing about this bread is that it reminds me of the our summer garden and the flowers that opened up every morning on the pumpkin vines. Seeing them from our kitchen window made doing dishes seem a little less like the drudge work it usually feels like. Sadly, in the afternoon they would close up like tight cocoons for the rest of the day. Jason and I often commented on how much we missed seeing them after their morning exhibition. But had they been open all day, would we have given them the attention they deserved (and would I have been drawn to do the dishes early in the morning rather than leaving them all day)? Probably not. Funny how so many things are that way.


*Warning: This recipe make a lot of bread. This has never been a problem in my house, but others may not suffer from our spiced carb addiction. Also, the bread is usually darker (and oranger) than the picture above. My pumpkin puree was a lot lighter than the canned pumpkin I usually use. We also took the bread out a bit early, as in, as soon as I was sure it was baked all the way through. We had to leave to make it to a story time on time. What can I say? Today was a practice in really poor time management, but really great bread.
Posted by kristin at 4:27 PM