The Things We're Born With 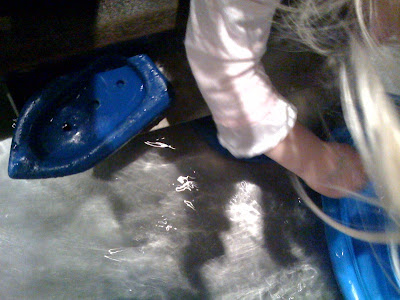 Some days, I feel like the most frequently used word in my vocabulary is "no." We are in that critical shaping period: the one where Audrey tests our boundaries and we respond "no" repeatedly in hopes of teaching her behaviors that will keep her safe and mold her into a kind, polite human being. It amazes me how innate this ability to test one's parents and push one's boundaries is. I have yet to run across a two-year-old who doesn't possess this skill, complete with a mischievous grin and squint of the eyes. Much of my days are spent in a battle of wills: me trying to break hers while at the same time hoping that she never folds completely and this bold fearlessness that I admire in her so much is not a phase.

We spent the afternoon at the Children's Museum. There are moments when I love this place like no other: "Yes, we can ride the carousel twice," "Yes, you can play in the water as much as you want." But there are also moments when I fear losing her in the crowd, when I tell her "no, you can't let go of my hand." Today was spent like most of my days, attempting to balance my nay-saying with a few resounding "yeses." I watched other parents doing the same and threw a few sympathizing looks to moms when their toddlers yanked a plastic dinosaur or Lego out of my toddler's hands. I saw some innate-boundary-testing connoisseurs.

Then, I saw something else. Several students were at the museum participating in field trips. A few of these students were in the dinosaur exhibit at the same time as Audrey and I. I had let Audrey slip her hand out of mine to explore on her own a bit. She crawled into a tunnel as a couple of students were crawling out. Upon seeing Audrey crawl inside, one girl (I'm guessing around nine-years-old) stayed behind. I heard her talking to Audrey, pointing out things Audrey could see if she crawled into different parts of the tunnel: a fish over here, a dragonfly there. I stepped back a bit, not wanting my presence to scare the girl away. As I watched the two of them interact, I was reminded of another innate ability we all seem to share, the want to help others smaller or younger than ourselves. I have seen it in the youngest of kids, my neighbor's three-year-old checking on Audrey after she's stumbled at the playground. Waiting for Audrey by the tunnel, it struck me that the presence of this innate ability is even more amazing than our need to test our boundaries - and that this very girl was once two and pressing her limits. As I watched the girl crawl out of the tunnel and run to rejoin her friends, I smiled and wished her mom could see her.
Posted by kristin at 7:31 PM