For Posterity's Sake: Week in Review 7 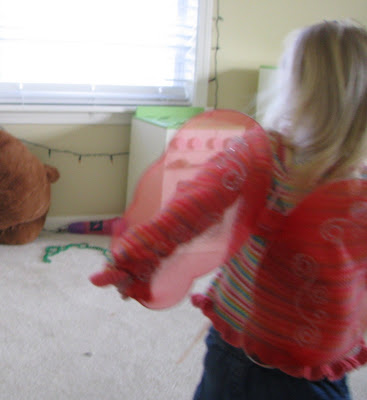 On Tuesday, Audrey asked to wear her angel wings (a very sweet gift from her aunt and uncle). Of course, once they were on, she decided she wanted to take them off. Trying to do it herself, she ran around in a circle as if chasing her own tail, a maneuver I've seen our dog perform several times, but had never witnessed in human terms. This got me laughing and reaching for my camera, simultaneously. I quickly snapped this picture (yes, I only made her suffer through one picture) before coming to her aid. Of course, once I took the wings off, she decided she wanted them right back on.


This week, Audrey showed her typical enthusiasm (and possibly the emergence of her techie side - thanks to Dad) when she gently petted my laptop and announced, "Neat. Like it." While she has always been somewhat fascinated by my computer, I think this increased appreciation may have something to do with the web cam her Dad had us pick up so she can now see and talk to him while he's at work.


Last night, while Jason changed her diaper, Audrey touched his face and said, "Nice eyes. Nice nose. Nice mouth. Nice chin." She even told him he has "nice hands" and a "nice knee." What can I say? I think he's pretty nice, too. 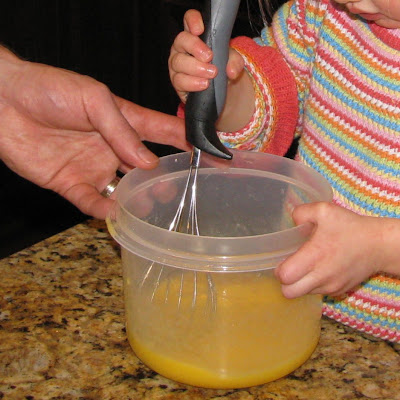 But the highlight of Audrey's week occurred Tuesday night when Jason taught her how to crack and whisk eggs. Since then, not a day has gone by that I haven't heard how she helped Daddy with the eggs to make dinner.


As Audrey grows, I am more and more impressed with (and appreciative that I am allowed to witness) the way that she views and takes in her world. She claps when she spies a statue of a dinosaur or waves her arms in excitement at some ducks swimming by and I wonder if she thinks the world is performing one large concert just for her. She notices the things I quickly walk by and tugs at my hand until I stop to properly inspect a driveway of rocks or a leaf on the sidewalk; and I realize that if it were not for her, in my haste to get on with "important things," I would be missing much of life's concert simply running from place to place, chasing my own tail.
Posted by kristin at 7:13 PM