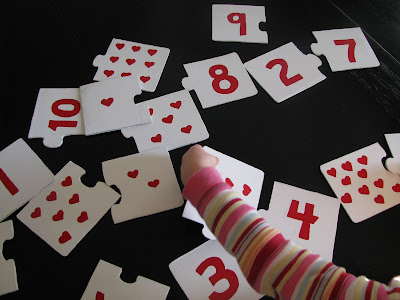 The great thing about 2-year-olds is they don't live by their calendars. When you pull out their just-completed Valentine's Day gift on February 23rd, they don't whip out their palm pilots, pull up their calendars, and give you a smug look that says, "what took you so long?" They take the gift, smile, and start to play. At least, that was the response from my 2-year-old when I presented her with her new puzzle game at breakfast this morning. 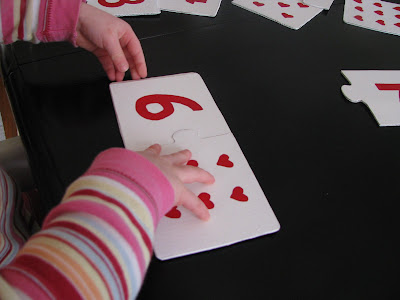 Audrey loves puzzles. She can also count to ten (occasionally - and sometimes frequently - leaving out the number eight). Lately, number books have been a big hit, especially one she received from her Grammy for Christmas. I've noticed that most of the books show the number spelled out (five), the numeric number (5), and a picture of some objects whose number corresponds with the numeric and spelled out number (5 balls). The book from Grammy takes things one step further with numbered buttons on a side panel that say the number when you push them. Audrey has started to master pushing the right numbered buttons, but each number is written in a separate color, so I don't know if she recognizes the numbers or is just matching the up the colors and shape of the numeric numbers. Also, most of the number books we have use different objects to illustrate the numbers on each page. 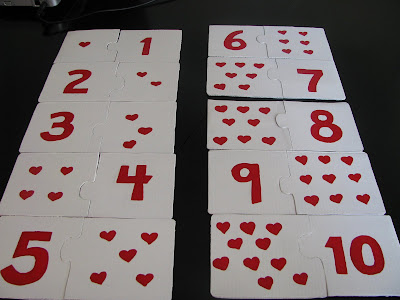 I started thinking about how I could simplify the idea of matching numeric numbers up with counted objects and came up with the idea of these Valentine puzzle pieces. Now, the colors and objects are the same, so the only thing that makes one puzzle coupling different from the rest is the numeric number and number of hearts. The puzzles are made out of a medium-thickness cardboard box that used to house a yoga mat, but more recently found itself on top of the to-be-recycled heap. I traced some puzzle pieces we already own onto the cardboard then used an exacto knife to cut them out. I painted them white using two coats of acrylic paint left over from another project then used red acrylic paint to freehand the numbers and hearts (again, two coats). I thought of this project at the beginning of February, when it seemed like it would take a week, tops, to carve out niches of time to complete it. I finally finished it at 10 pm last night. What can I say, turns out I'm not a speed demon with the exacto knife or paintbrush. Luckily, two-year-olds don't care.
Posted by kristin at 9:15 AM