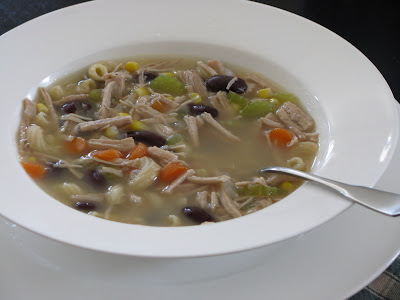 I have a full-service mother. While in college, she sent enough goodies (snacks to keep us fed and other items like bubbles or silly putty to keep us laughing) in care packages to feed and entertain not only my sister and I, but all our friends as well. My parents were those that drove in separate vehicles to drop us off at college so we could haul all our things, unloaded all our stuff, assembled loft beds my father had built, and then took us out to eat before making the two-hour drive home (most likely leaving a stash of homemade cookies or brownies behind). My parents came over last Friday to take Audrey off our hands so I could focus on taking care of Jason's bum knee. They also brought along a pork loin to eat for dinner. Like I said, full-service. We ate half of the pork loin that night and had half left over. The meat was so tender, it fell apart when touched with a fork, which gave me an idea.

Last summer while eating at Patti's Restaurant (well, we actually ate at Bill's - same food, shorter wait), Jason and I tried a Pork Vegetable Soup. It was fantastic. I kept meaning to attempt some sort of rendition once we got home. I never did. Until Friday. The soup I made isn't the one we had at Patti's. Patti's had lima beans in it and didn't have several of the items I threw into the mix. The soup I made could just as easily be called Pantry Soup or A Handful of This, A Smidge of That, because I basically threw in whatever we had on hand. So here it is, by the smidgen and handful:

I started with 2 quarts of chicken stock brought to a boil and added:
Half a diced onion
3 hearts of celery diced and an equal amount of diced carrots
Several cranks of fresh ground pepper and sea salt
At this point, I turned the soup down to a simmer, letting the veggies soften a bit before adding:
The pork loin (probably a pound), shredded
1 cup of elbow pasta
1 can kidney beans, drained
1 cup of frozen corn kernels
Then, I tried to think of what seasoning to add to give it some pizazz. Sage is a common herb used to compliment pork, but it can decrease a nursing mother's milk supply. So, when all else fails, I figured I'd toss in a bay leaf (it seems to work for Racheal Ray) and let the pot simmer just a bit longer.

The recipe was a success. Definitely something we'll bring to the table again and play around with depending on what we have on hand the next time around. You've got to love a dinner that just comes together, especially when your mama has done half the work for you.
Posted by kristin at 4:11 PM