Forgetting February, or Why February Lasts as Long as a Stay in Rehab, Coincidence? 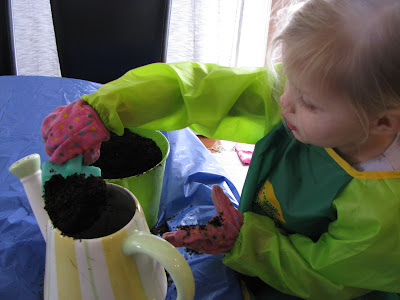 For being the shortest month of the year, February has some white-knuckle-gripped staying power. Perhaps, it's the encore of snow day-producing storms, my painfully dry skin that I can't seem to find the time to care for, or my daydreams of strolling two certain little ones through freshly green parks, but whatever the cause, I'm beginning to ache for the warmth of spring. So, in the spirit of optimism, I've begun to devise some non-rehab-inducing coping mechanisms to champion what's left of winter's final stronghold. Here are five:


1. Do something unexpected (or, bring the outside in). Bring in some potting soil and plants. Play in the dirt - at your kitchen table. Remind yourself of the outdoor activities to come. Find an indoor pool and splash around. Get some exercise. You know, just to show February who's boss.


2. Do something quirky, or downright ridiculous. Monday night, after both kids were asleep, I convinced myself to head down to the basement for twenty minutes on the elliptical machine. I took my phone and a book with me. I got on the elliptical and began pedaling. Then, I turned to distractions. I tried to return a call from a friend. She didn't pick up. I looked at my book, but after all the information coming at me all day, I didn't feel like adding more. So I turned on my ipod. I began to sing. Out loud. My high school gym teacher, Mr. Fallis, would not approve of such behavior, the theory being that all your energy should be focused on your physical motion, hence, the energy used singing could be better used in my legs. I remember my father sharing this opinion on one or more occasions while cheering for me at cross country meets. Every once in a while he'd yell some helpful advice to me as I ran past, something like "Push it, Kris!" I may have turned and yelled back once, or twice, "You push it," to which he'd reply that if I could yell, I could run faster. Like I said, helpful. But Monday, while exercising by myself and listening to adult music for the first time in days, singing out loud felt a bit empowering. You would not describe me as "in shape" right now. But those twenty minutes flew. Mr. Fallis can push it. Just kidding. He might show up at my house and snap me in half with his pinkie finger. Seriously.

Note: This might not be advisable if working out at a busy gym. Also, should you walk up the stairs from the basement still singing, your husband might mistake you for your sleeping toddler (after all, you were going downstairs to workout not put on a concert). He may start yelling for her to go back to sleep. Just a warning.


3. Take on a childlike perspective. Several times this week Audrey has tried to stick her bare feet out the backdoor and into the snow. On Monday, Mama Skeleton entered our lives. I'm not sure where Audrey met Mama Skeleton, but apparently, Mama S. has given her permission to race outside in the snow with no shoes or coat on. Having no flesh or sinus cavities, I'm sure that Mama Skeleton doesn't worry about such things as frostbite or runny noses. Children don't, either. While I'd like to hibernate indoors (and produce mass quantities of "most wanted" posters for the mysterious Mama S.), I'm trying to appreciate the weather that is now. I think of friends in Florida who drove to North Carolina recently so their children could see snow for the first time. I remember that first satisfying crunch of boots on hard-packed snow, the magic of a snowfall untouched, the fresh feeling of cold air against bare cheeks. I remind myself to savor the snow, to let her savor it. The best snowfalls are those from childhood. They will only last in our memories (and only then if we've taken advantage of them).


4. Take advantage. The long days of February are the perfect excuse to take in the comforts of the season. Layer on blankets. Drink hot chocolate by the bucketful. Stoke the fire again and again. Acquire more wool yarn than you can knit, more books than you can read, more boots than you can wear (okay, this may not be responsible, but February does seem like the perfect excuse to be excessive). Dress your table with comfort food. Let hugs linger, you know, for warmth. ;) Do not apologize for any of the above behaviors. Blame the weather.


5. Be confident (or, talk yourself down from the doldrums ledge). The snow will melt. February will end. The sun will put on her brightest frock, strut, and begin to show off. Be confident. The flowers will come.
Posted by kristin at 7:40 PM