For Posterity's Sake: Week in Review 58

We have been treading a path back to normal since Jason's surgery, catching up: on sleep, on chores, on family time. Of course, the funny thing about normal is it's constantly changing. Just when we think we've figured something out (how to manage a trip through the grocery store, the bedtime routine, how Audrey will react to a situation), the scales tip and we find ourselves scrambling to shift our weight and regain balance. I can find no greater example than our little girl, who is no longer so little, who daily surprises us with her quick wit and maturing reasoning abilities. Just when I think I've mastered the art of the "parental straight face" or "standard issue parental response", she nails me with one of these:

On Monday, Audrey and Jason were in deep discussion. I don't know what the topic was, only that it involved something Audrey didn't understand. Jason was asking her if she knew what something meant, and Audrey, whether for reasons of wanting to be seen as a big girl or simply in the know, refused to admit that she wasn't sure. It went something like this:


Tuesday, I caught her picking her nose. Knowing I would not approve of nose-picking, she tried to rename the action. "I just had an itch up there," she said.


She was working on a puzzle on Wednesday at the kitchen table. I was at the sink and heard her asking questions. Assuming they were directed toward me, I answered. "Now I'm just talking to myself," she said.


This week, we discovered that Nathan's second newborn screen was somehow lost and never analyzed, requiring us to have a new screen performed. My mother graciously gave up her Friday afternoon off to watch Audrey while I took Nathan to the lab. While at the house, Emmy (our dog) jumped up on her. Routine trips to the groomer are just one more aspect of normal that I haven't quite figured out how to logistically pull off since bringing Nathan home. As you can imagine, a haircut and bath are well overdue.


Jason arrived home before me on Friday. Shortly after he got there, he heard Audrey refer to my mom as "mama."


Nathan is on the cusp of changing normal, too. He wants to roll over so badly. Tonight after a diaper change, he rolled onto his side. I lay down beside him, facing him. He moved his arm in an arc toward my face, his fist coming to rest at my mouth. I kissed his hand. He smiled and squirmed, and a new game was born.


It has often been said that the only constant is change. You've only to spend an hour with a toddler and newborn to feel cloaked in the sentiment. But for all of this growing and the accompanying family modifications, there are some things that I hope remain the same: Audrey's spunk and her ability to morph from full-on spunk to full-on affection in the turn of a page. Her smile that sparkles like a field of lightening bugs, making magic across her face. Her quick wit. Her kind heart. Her genuine laugh. Those grasp-you-to-your-core hugs. As for this little boy of mine, I can't seem to talk to him, or about him, without wanting to preface any mention with the word "sweet", and I hope I always will (much to his future teenage disdain, I'm sure). Even after being pricked at the lab, he quickly regained his calm demeanor, my sweet laid-back boy, so willing to accommodate the normal of the day - whatever it may be. Let's hope the trait remains. Goodness knows, he's going to need it: 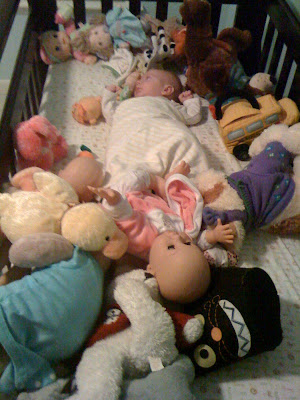 She told her Daddy she was "sharing" her toys. Ahem.