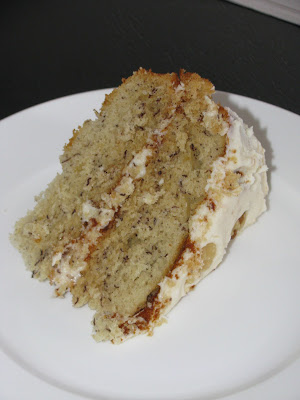 On his birthday, Jason brought home a slice of banana cake baked for him by a coworker. It was good. Really, really good. Pull-out-that-banana-cake-recipe-I've-been-hoarding-for-months good. Purposely-over-ripen-those-bananas-on-the-counter good. (Okay, I didn't actually over-ripen the bananas on purpose, but don't think I didn't think about it.) Ooooh-and-ahh-and-gesticulate-over good. You get the idea. 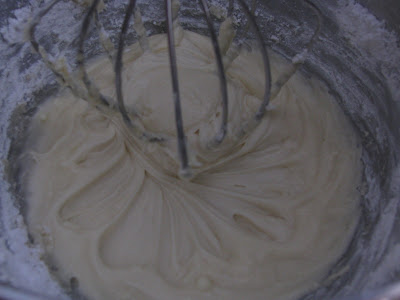 So yesterday, I took said bananas and baked a cake - the Heavenly Banana Cake from Whipped. It's not the recipe that Jason's coworker used. Hers was distinctly banana-flavored and used sour cream (an ingredient that you should typically not tell Jason is in your cake if you want him to eat it). This one is much more subtle, very moist, and pours in the buttermilk (another ingredient Jason isn't always so keen on). Both are good (I think I'll have to see if Jason can swipe the other recipe for me, too). It can't hurt to have two banana cake recipes on file. 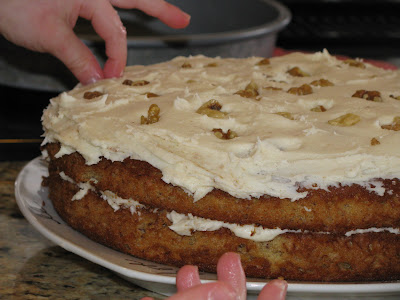 Today, Audrey and I made the cream cheese frosting to top our cake. While making it, Audrey asked, "Does it have raw eggs?"
I said no.
"So I can eat it?" she asked.
"Yes, you can eat it." She dipped her finger in, took a taste.
"This is my food," she said, dipping her finger in again, and after each addition of more powered sugar. (Someone needs to teach this girl about the rules of double-dipping).

Icing cakes brings out my clumsy side. My cakes look as if someone started with a crumb layer and suddenly remembered they need to hit the bank before it closes. Toddlers aren't adept at waiting for crumb layers to set, either. They are adept at walnut garnishing. (For those of you with nut allergies, the nuts are optional and only top the cake, although I did love the extra layer of flavor they provided. Not worth anaphylactic shock, but I'm just sayin').

As you can tell from the slick fingers in the photo, this wasn't a sanitary cake. But it was a yummy one. And, now we know what Audrey's kind of food is: icing, heavy on the powdered sugar. Of course.
Posted by kristin at 7:06 PM