Jason's first boss following college, the brilliant and much-loved Mr. Sims, relayed a story to him (which he later shared with me) that has stuck in my mind the last eight years. The reason for the telling of the story (as well as some of the details) are a bit fuzzy, but the tale goes something like this:

A group of scientists were doing a study to monitor the different behaviors of children. Twin boys were taken to a horse farm and led to the stalls. Each boy was taken to a different section of the barn, but both were left alone in a horse stall, empty except for manure-laden straw. After a while, the scientists came back to observe each boy's behavior. The first boy was angry, kicking the straw with his feet, voicing his disappointment for the disgusting environment he'd been left to. They found the second boy covered in dirt, laughing as rolled around in the straw, tossing some up in his hands. When they asked what he was doing, he replied, "With all this crap lying around, there has to be a pony somewhere!"

We have often thought back to that story, and "finding the pony" has become a catchphrase at our house. Last week was a straw-rolling-child-seeking week. As we dealt with numerous things medical and more things tiresome, finding a gem amidst the dirty straw moments of the week was needed. 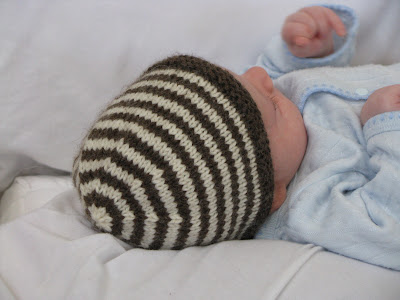 Someone got a new hat. The striped hat is becoming somewhat redundant around here, I know. But I do love a baby in sweet soft stripes, and this one knits up so quickly, it's perfect for a little waiting room downtime. Oh, I do love a good pony.