A Focus on Gratitude Day 4 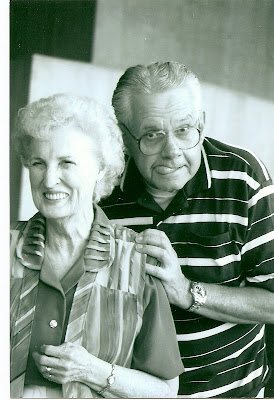 The woman you see in the photograph is my grandmother. The man beside her is Clif. I could have easily lived out my life without ever meeting him, but as happenstance (or World War II, which ever you prefer to call it) would have it, we did meet. Clif enlisted in the Army at the same time as my grandfather. They became good friends. Clif was a cook and often snuck my grandfather more (or better) food at the end of the day. Both men survived the war, got married, and started families. They would occasionally meet up with their wives after the war.

Years later, Clif nursed his wife through rheumatoid arthritis before losing her much sooner than he would have liked. Meanwhile, my grandmother was busy caring for my grandfather, ravaged by and quickly lost to lung cancer. Occasionally, my grandmother and Clif would see each other at the Army reunions. Living about 35 miles apart, sometimes they would carpool.

Both were lonely. Both knew the heartache of caring for a sick spouse. By this time, they each knew that the other was not in prime health and neither wanted to put the other through the hardship of being that sort of caretaker again. But after some debate, and courtship, they married.

Clif was my grandmother's husband the last seven years of her life. Together they traveled the three hours (one-way) to attend my big sporting events and high school graduation. Clif became the constant at her side, through vacations, holidays, and her battle with melanoma. And while I can't imagine the switch of celebrating life's moments cozily with a sole daughter, son-in-law, and granddaughter to the additional, ahem, circus of three lively step-daughters and their spouses, a step-son, and seven more grandkids, Clif handled it all in stride (also, perhaps, with the assistance of turning off his hearing aids from time to time).

As a high-schooler, you warrant your grandmother certain privacies. You don't ask about her love life. You don't make her talk about loneliness. But even a self-absorbed teenager picks up on the life lived between the lines. She notices when the spark returns to her grandma's voice; the frequent relaxed laughter; how someone sitting by your side, never leaving the room, is a stronger painkiller than any medicine.

By the time Jason and I married, Clif was revisiting his role as a full-fledged caretaker. My wedding was the one big event my grandmother wrote on her calendar that year, and with Clif escorting her the three hours each way, and every step down the aisle, she made it. And for one year more. As happenstance (or an irrefusable job offer from a Fortune 500 company, which ever you prefer to call it) would have it, we moved two hours from them. Many Saturdays were spent in their family room, me hand-in-hand with grandma on the couch while Clif waited on her. And just as he fed my grandfather decades before, Clif fed her, cooking whatever he could get her to eat, keeping her warm - nourishing her. Jason and I would often marvel at the two of them on our drive home. Occasionally, one of us would have to repeat ourselves so that Clif could hear us. But somehow, he always heard my grandmother, whose voice by then was only a whisper. He always heard her voice. He always knew what she needed. He never left the room.

My grandmother died that summer, but I continued to send cards to Clif, who wrote back. When Jason and I would visit (visits becoming a little harder as we moved farther away) Clif would tell us stories about serving with my grandfather or trips he had taken with my grandmother. After a particularly good story, he would slap his knee and scrunch his face into one of the best heartfelt laughs I've had the pleasure to witness. He let Audrey rearrange the framed pictures on his coffee tables and crawl all over him. He greeted us at the door with homemade ice cream or cake. He could talk to you about sports, or factory life, or historical events (past and present). He could tell you how to grow tomatoes or bake a ham, which was great because my grandfather once blew up a ham, not realizing that in order to bake a canned ham, one must first take the ham out of the can before placing it in the hot oven. (I feel privileged to have had them both: the seasoned chef and the ham grenadier).

On Saturday, Clif passed away. He was 86. His life was full. His heart was virtuous. He spoke the truth as only a man in his eighties can. And as I think back on the parts of his life I knew, the phrase "well done" surfaces repeatedly in my head. Much of the last eight months have centered on me preparing once again for motherhood - this time to mother a boy. A handful of men come to mind when I think of examples of the man I would like to teach my son to become. Clif is one of those men. And I am so grateful for the man he was: a man I could have easily never met, yet can't imagine having lived without.


*Tomorrow, I will spend most of my day in the car to go say goodbye to my friend. I doubt I find the time to log on here. But I will see you soon. Until then, be well.
Posted by kristin at 10:52 PM