Let Them Eat Cake (and Some Appetizers) 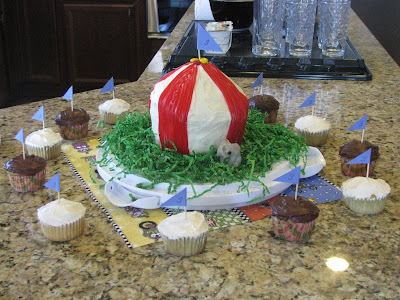 This year Audrey has begun to group like things: pointing out the blue objects in a room, mastering Where's Waldo, and just this morning comparing my eyes to the browning trees outside. So, it should come to no surprise that after attending a few birthday parties this year she began to associate all such gatherings with the presence of cake. To hear her tell it, the most important aspect of any birthday party is the presence of cake. I was careful to not disappoint.

Last year, with a 50% off coupon, I ran across and purchased this Giant Cupcake Pan by Wilton. Then, like most of my random kitchen purchases, it sat in a cabinet for a year waiting for the perfect occasion to unveil itself. That occasion came last weekend when I decided that a huge cupcake looks an awful lot like the shape of a tent.

Armed with a box mix (I decided to take a little help this year) and this recipe from Anne Bryn, aka the Cake Mix Doctor, I got to work. I didn't use a German chocolate cake mix since I had a chocolate fudge one on hand. I opted out of using pecans as well (having other plans for decorating my cake in mind). I didn't have cinnamon chips at home (and my box mix had small chips in it) so I used 1/4 c. of 60% cacao bittersweet chips, although next time I think I would throw in the entire 1/2 c., simply because I can't think of a good reason not to. I also used a different recipe for the frosting. During high school and summers off from college, I worked at a little tea room called Almost Home. They make an incredible carrot-pineapple cake with cream cheese frosting. I used the cream cheese frosting recipe from their cookbook for Audrey's cake.

I liked the flavor of the cake, but I think I over baked it a touch because I was hoping for something just a hair more moist. (And due to my inexperience with the odd-shaped pan, I didn't know how long to keep it in the oven). Once out of the oven and iced, I used Pull-n-Peel Twizzlers to make red tent stripes (I was looking for a quick-fix to decorating). A few M & Ms on top (my husband's brilliant suggestion) to hide a mishap that occurred when I discovered our cake container was a tad bit too short for the cake and one blue flag made using, card stock, a toothpick, tape, and a "3" stamp, and the cake was finished. The fake grass is some that I reuse every year for our Easter baskets. As for the little elephant candle in front, that was the candle on my ninth birthday cake (that my mother saved and gave me when I was pregnant with Audrey). The cupcakes were made using another box mix and some store-bought icing, topped with more homemade blue flags. Easy-peesy. 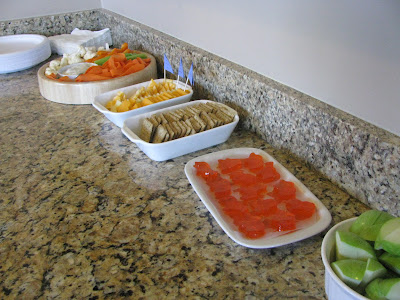 Of course, as much as my toddler would love to try, one doesn't live on cake alone. So we added a few little snacks in the mix. Our veggie tray included some carrot "shavings" made using the vegetable peeler, because while Audrey rarely eats carrot sticks, carrot shavings are a different story. Then the Noah's ark cookie cutter set made a reappearance. I used them to make animal-shaped Jell-o jigglers and then again for some animal-shaped cheese slices.

It may look as if I went a little overboard with our party and theme. But most of these ideas are inexpensive, easy to do ahead of time, or just plain easy. Because while I was into a small party that celebrated big, big stress was not on the agenda. And now to go find out what this whole third year is about...