What's a Circus Without a Tent? 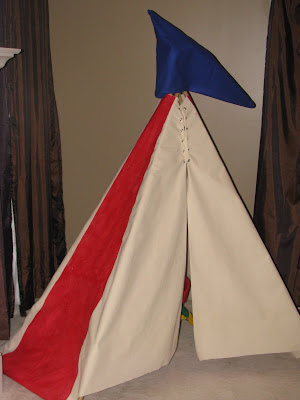 Like most toddlers, Audrey loves to tuck herself under her sheets with as many stuffed animals as she can manage to gather around her. Cushions are simply "blocks" for weekend fort-building sessions with her Dad. If you're not up for a game of hide-n-seek, involving crawling under clothing racks, strapping Audrey in a cart to navigate department stores is a must. As for those curtains that I thought I hung to give the option of blocking a little more light, well, they're much more practical for hiding from monsters.

You know where this is going. Before you could say "Barnum and Bailey," I decided that Audrey needed a birthday tent. I looked for an internet tutorial on how to make a tent and found this one on the Sew Mama Sew blog (their teepee pictures are much better). It's actually a tutorial for a kid's teepee, but close enough. Of course, I didn't follow the pattern to the letter. It calls for painter's canvas, but I used duck cloth, which seemed to work just fine. Oh, and as for that little teepee/tent problem, I tried to solve it by making a blue flag out of felt to slide over the tops of the bamboo posts - not a perfect fix, but it worked. (I will tell you, this is not a simple project to pull off for a late fall/winter birthday. Bamboo garden posts are not easy to come by in the off-season. Luckily, Audrey's Grammy works at a nursery and with her help, we were able to procure the posts we needed. Thanks Grammy and John!).

I kept this project hidden away while I worked on it. Jason rearranged the family room furniture and we set the tent up in a corner for Audrey to find the morning of her birthday. And while I don't have any pictures to demonstrate (I don't like to spend my time at parties taking pictures, nor do I like to post pictures of others' children without permission), the tent was a hit with our roomful of toddlers, especially the birthday girl.

The nice thing about this tent, or teepee, is that it's portable and doesn't take up much space when taken apart. Use it inside or out, put it up or down as needed. Jason deconstructed ours after the party, but this morning Audrey asked of its whereabouts, so I have a feeling it will make a reappearance this week. Oh, and as for you non-sewing mamas or papas who would love a teepee for your little one? It's a no-sew project. Although, I think I would like to sew up two hems on mine, just to keep fraying at bay.

Now will you humor me with one more day of birthday celebration posts? Then I will move on to something else, I promise.
Posted by kristin at 10:56 AM