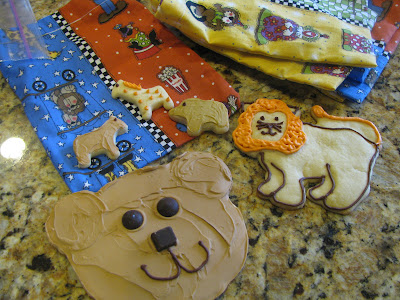 Audrey's birthday weekend was a little like that. It began with some innocent fabric. Free fabric. Child-friendly fabric. Fabric that one has no idea how she will use, just that she can surely find a way. Irresistible, bringing-it-home-with-me fabric. 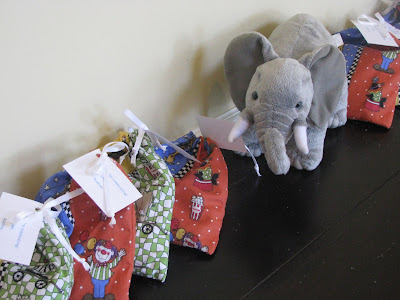 So three lengths of fabric, the size of table runners, came home with me at the beginning of the summer and sat in a pile to await what they would become. The longer they sat, the more determined I became that this little fabric was destined to party - children's gift bag-style. Conveniently, I have a child. Even more convenient, she has a birthday. And luckily for the both of us, she thinks circus animals are just great. 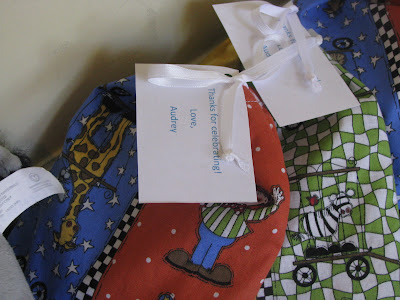 Two of the table runners stayed as is and continued their function as table runners at Audrey's party this weekend. The third became eight small tote bags tied with white ribbon and a thank you message from Audrey to serve as party favors. They're perfect for stashing childhood treasures, and before that, perfect for stashing some homemade sugar cookies, which is just how we used them.

The lion cookie in the first picture was made using a Sassafras superstone cookie mold that one of my sisters had given me years ago. The lovely people at Sassafras included a sugar cookie recipe on the mold's label, which turned out to be yummy (and easy to make with the help of toddler hands - well, at least the dough). Of course, I couldn't just fill our bags with lions, which is where the whole begot process started. I began buying other cookie cutters (using 40% off coupons as rationalization): a Wilton set of stackable cutters to create unique bear faces, which I kept simple and unstacked for this party; and a Wilton Noah's ark set for some smaller projects I had in mind.

I wish that I could tell you that this is where the principle and I parted ways (albeit, if we had, the party would not have been quite the circus it became). But, clearly, that's not the nature of the begot principle. And so, hand-in-hand, the principle and I continued, and begot some more: more ideas; more projects; more supplies; and a little less sleep, but definitely more birthday smiles. But more on that tomorrow...
Posted by kristin at 8:07 PM