For Posterity's Sake: Week in Review 44 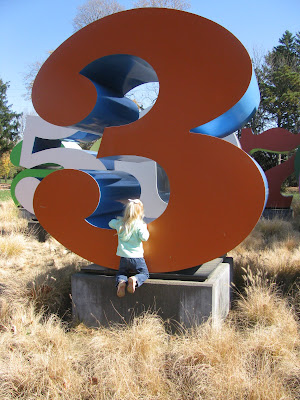 On Tuesday, Audrey and I made a trip to the Indianapolis Art Museum to take a good look at "3" and begin to see what it's all about. Of course, there are signs posted next to the Robert Indiana exhibit asking that you not climb on the sculpture. I only had to tell my toddler five times. (And, as much I would have loved to ask her to climb inside the 3, turn around and smile, I settled for quickly snapping this shot while her back was turned before asking her to please get down per the museum signage). 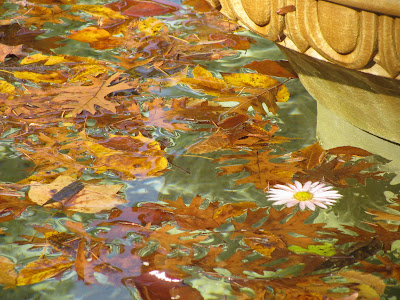 While the sculpture was not conducive to climbing, it did provide the perfect setting for a game of hide-n-seek, eliciting several toddler squeals. The gardens, with their fountains, paths, wildlife, and sculptures made for a perfect afternoon walk, complete with a chocolate chip cookie break on a bench. It wasn't until we began our return trip to the car that I realized we were missing one of our party. The bean-stuffed dog that Audrey had begged to take with us was no longer in her hands. I began to backtrack - mentally, first and then physically as I remembered places I had seen her with the dog. We came back to the large numbers and I scoured the tall dry grasses surrounding the sculpture, not telling Audrey what I was doing.


After about twenty minutes and searching a couple other spots, I gave up the hunt. I worried as I carried her through the parking lot to the car. She's left several stuffed animals at her grandparents' house, resulting in a 45-minute car ride of toddler angst (read: meltdown), followed by daily reminders of the lost item's status until its point of return. Desperate to distract her, I handed over the only thing in the car I could think to give her to occupy the ride home: a stray Pottery Barn catalogue. She flipped through the pages and never mentioned the dog. Relieved, and a little awed, I thought I was in the clear - until I overheard her talking to her Dad that evening. "My dog is missed," she said. "It was riding with me." And he's never been mentioned again.


Normally, I write about the things Audrey says that make me laugh during the week. But this week, I'm going to share a quick story about something I (and Jason) caught myself saying. Jason was having a late night at work. Hoping to maximize on the time he would have once he got home, I decided to give Audrey her bath early, before dinner. Jason called to say he was on his way home as I was bathing her. During the call, Audrey picked up a plastic orange beach shovel. She filled it with water and flicked the water in my direction - a direct hit. Caught off guard (and still on the phone), I said, "Audrey, no! If you do that again, I don't know what I'll do, but it won't be pretty." (After all, noticing we were in the bathroom, my usual timeout options weren't available). Jason began laughing on his end of the phone. I quickly followed up my statement with a threat to take away all her bath toys. (I still haven't figured out when I became an actor in an action film. It won't be pretty?!).


On Thursday, Audrey and I got vaccinated. I had told her that she and mama were getting shots, that it would hurt for a little while, but she would be okay. After my explanation and some paperwork, we were shuffled through a line and directed to a couple of nurses. "I'll go first," Audrey said, bravely stepping forward. My tough girl sat still until the needle pierced her skin, when I felt her entire body tense against the pain. And then the tears came, followed by her description of the experience, which we she has repeated to everyone with whom she comes in contact, "They gave me a hole. I don't want a hole. It hurts!"


Today we had a couple errands to run. Jason, home a little early, came on one with us. When we arrived at our destination, Jason and I got out. Before we could get to Audrey's door, we heard her yell through the glass, "You're supposed to take me!"


On another errand, Audrey and I drove past a farm with horses. The last two times we've driven by the weather has been dreary and the horses have been in their stables. Today they were out, running around as usual. Audrey watched from her window, "The horses are back where they belong," she said.


We have had a couple busy weeks: Jason traveling and some celebration preparations that only happen once a year. Fall feels like it has its own magic around here: so many things to be thankful for, so much to celebrate, and so many beautiful things to take in. This magic is two-fold, bringing us closer and setting things a little topsy-turvy at times. And now, as things slow down for a couple weeks before Thanksgiving, it feels like the right time to notice all the simplicity we can, to look ahead to the joys to come, and try to get everything ready and us back where we belong.