For Posterity's Sake: Week in Review 93 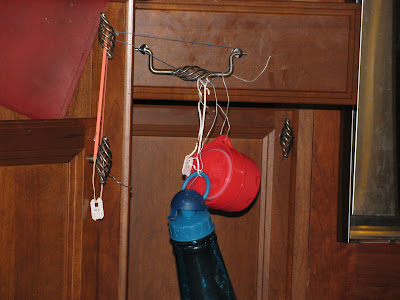 It may be the onset of what I refer to as their birthday season, perhaps, it's the spirit of Halloween and the ability to turn oneself into anything one wishes to be. Whatever the cause, the two youngest members of our family are oozing confidence. Nathan has begun testing his legs, letting go of the coffee table or cabinets to see how long he can keep his balance before toppling over. He has also begun testing his boundaries, glancing at me sheepishly before tossing his food over his tray to a begging Emmy. It's hard to tell this little guy "no" with any real authority (or straight face): this sweet boy who lightens our days with his laugh and crawls underfoot as I make dinner, bumping my leg with his head until I stop and pick him up (he gives his father the same treatment each night when Jason comes home from work).

Audrey has been sporting her own confidence, displaying it in words and play and all the spaces in between:

On the 23rd (yes, I'm beginning this review a day early), I asked her to pick up her playroom, a request that comes with heavy objections. After much cajoling, she did complete the task, proudly showing me the clean room. "Mom, will you send Dad upstairs to see how great I am?"

On Sunday, Audrey went to the front of the church to listen to the children's sermon, during which the pastor showed a picture of Michael Phelps and explained that whether you have eight gold medals or none, God loves everyone regardless of their gifts. Audrey asked him where Michael Phelps lived. Then, possibly as a way of asking if he was wrapping things up, she asked when they were going to sing. Later, as we were sitting around the table, she said,"Mom, I love you better than Daddy, but I love Daddy, too. Just like God loves all the little children."

Jason looked over at me. "You're Michael Phelps," he said.

On Monday, Audrey developed a new favorite pastime, building castles or tents (the name changes daily) using the kitchen cabinets and their contents (cutting boards for roofs, aprons and burp clothes tossed over doors, pitchers and pots and pans scattered every which way). This new activity began when Audrey took her water bottle out of a cabinet and realized she could hang it from the cabinet hardware using a twisty tie. She got it adjusted just right (the picture at the top) and stepped back to admire her work. "That's so impressive," she said.

Wednesday morning she woke up and informed me she had dreamt that she drank soda poison (what Jason calls soda since he knows I'm hoping to keep her from drinking it until she's a teenager).

Later, while working on a project at the table, she said, "Mom, you're so nice to me. Mom, are I so thankful?"

That afternoon I began work on Nathan's bumblebee wings for his Halloween costume. Audrey ran over to my supplies. "Mom, I can help you because I'm great."

Audrey spent much of Wednesday "flying" about the house, displaying her super powers. She snuck up behind me as I did dishes and told me she would give me my own super power. She poked her finger into my side and "pumped" a super power into me.

"What super power did you give me?"

"Chocolate." (I think she's been talking to her grandmother).

Later, while outside with Jason, she told him about her super powers. He asked if he could have one. She told him that she would give him a chocolate super power, too.

"That's what you gave Mama," he said.

"Okay, you can be banilla [vanilla]. But we're just playing a game. We're just pretending."

"But I want a real super power," he said.

"If I give you one, I won't have enough in my belly for me." (Apparently, super powers are stored in one's stomach. This might explain why they're named after flavors).

On Friday, Audrey escorted Jason to the store. When they came home, they informed me they had had a fight on the drive back but Jason wasn't allowed to talk about it. After several minutes, Audrey finally gave her permission. Apparently, she informed him that she didn't think I was a monster, but that he wasn't allowed to tell me she felt this way.

"Can I tell her I agree with you that she's not a monster?" he asked.

She told him no, realizing this would implicate her in the process. He attempted several versions of this question, which she thoughtfully considered but shot down each time once she realized what he was implying. Maybe she does have super powers after all. I mean, she'll tell you herself, she's pretty great. So is that little brother of hers.
Posted by kristin at 9:10 PM