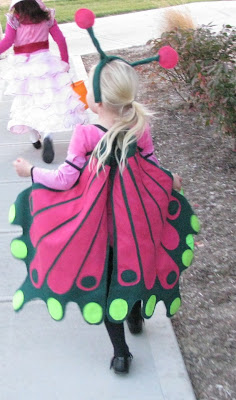 We have been squeezing all we can into, and out of, October, wringing that towel for every pumpkin-spiced drop we can get. The week has been full: welcoming a childhood friend and her family into our neighborhood; putting the finishing touches on Halloween costumes; and making plans for a certain soon-to-be-four-year-old's (really!?) birthday. And while I have some catching up to do in this space, tonight I'm going to spend the last hours of October thinking of the weekend past and its sweetness, inside and outside of those candy bags. 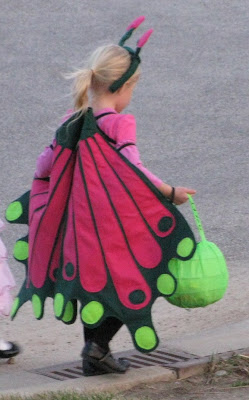 You might recognize Audrey's costume. I made these wings from a pile of leftover felt back in March with plans of giving them to Audrey as part of a birthday gift. Then, a couple months ago, she informed me that she wanted to be a butterfly for Halloween this year. Not one to stand in the way of a Halloween wish, she received the gift early. Saturday morning, I covered a headband with felt matching the wings, and attached antennae by covering some thick floral wire with felt and twisting it around the band before sewing some pink circles (with light green circles inside the front pieces) on top. The costume made her sing, literally. She fluttered around the house Saturday morning sporting the wings and singing a made up tune. It may have been the before-bedtime sugar, but she woke up singing this morning, and those butterfly wings found themselves making a second appearance in, ahem, church. 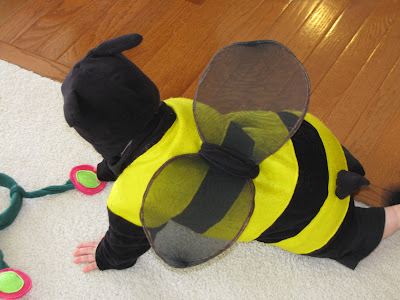 Nathan spent his first Halloween buzzing about in this costume (actually he spent it sleeping in the little red wagon while his sister dashed through the neighborhood), made from a black fleece that once belonged to my sister. The fleece found its way into a pile intended for Goodwill a few months ago, where it sat, because, good as my intentions might be, I just can't seem to make it to Goodwill. Once I began brainstorming warm Halloween costumes for Nate, that fleece got pulled back out (sorry, Goodwill), which may be my best rationalization for procrastination yet. The fleece gained a few yellow felt stripes and a pair of wings fashioned from floral wire and a pair of my pantyhose that had a run in them (yep, he's going to love knowing that when he's older). One stinger and a hat made from the same fleece later, and he was ready for his close up (or at least, running away from it). Two sweet winged creatures zooming around your house? Precious. One full bag of Halloween candy for a preschooler ready to devour it? Frightening. Two memorable costumes without paying a dime? Priceless.
Posted by kristin at 8:58 PM