For Posterity's Sake: Week in Review 90 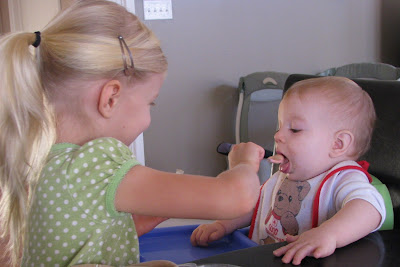 Most weeks, I hoard the funny stories from our days and stash them here for safe keeping. As I write them down, I relive the laughter. I feel gratitude, not just for the laughs of the day - these precious memories, but for the gifts bestowed upon my children: her quick wit and his easy way with a smile and laughter. As they grow and learn what we all must, that so little of our days are under our control, these abilities will matter (and ease their mama's mind) more than the totals of their SAT scores or bank accounts ever could. But not just these memories. Or gifts.

I tend to focus on the funny, but so often I find myself taken back even more by the sweet nature of my children. They do not have to be this way, and yet, every day they surprise (and delight) me with their willingness to help, to sacrifice, to give, and to love. These moments, like no others, fill me with gratitude - gratitude for how they ease my days and gratitude that I have been given these children and this this job of knowing and encouraging them.

So here are the moments that stuck with me last week - the sweet moments (not that they don't include a little humor), because without them, you wouldn't have a complete picture of who these children are:

Nathan had his third tooth push through Monday night. No tears, no whining, just a few sleepless moments of each night the week before. While he's not quite ready to jump in and help unload the dishwasher like his big sister (not that that stops him from trying to climb into the dishwasher) he seems determined to be as easy on his mama as he can. He's the silent, sweet type, easily calmed by a cuddle and typically only inflicting pain when he snags you with one of those three new teeth while planting a kiss on your cheek. He has us all a bit smitten, especially his big sister who has been referring to him as her best friend for weeks. This week she insisted on feeding him.

She's also quite smitten with her Daddy. Tuesday morning she became upset when she woke up and realized he had already left for work. "But now I can't hug him and kiss him!" she said.

On Wednesday, she saw her brother crawling toward an electrical outlet that had a cord plugged into it. She ran in front of him and blocked the outlet with her body (he was still several feet away) while yelling, "No, Nate! Dangerous! Dangerous!"

Later that afternoon Nate dropped a heavy plastic elephant, which landed on Audrey's toe. Audrey had barely stopped crying and nursing her toe when Nathan smashed his own finger. Audrey left the room and came back carrying a cup of ice to make her brother's finger better.


Friday morning, Audrey did wake up in time to see her dad off to work. As he was leaving, she poked her head into the garage. "Be careful! Don't crash!"


On Saturday, while walking along the canal, she told us she wanted ice cream. "I thought of it for you," she told her dad (who has sensitive teeth and rarely eats ice cream). "You like ice cream."


Last week, we were blessed with warmer-than-expected weather, some extra family time, and two scoops of sweetness, served with a side of smiles. It was more than we could hope for and more than this mama deserves, but she'll take it - any day of the week.