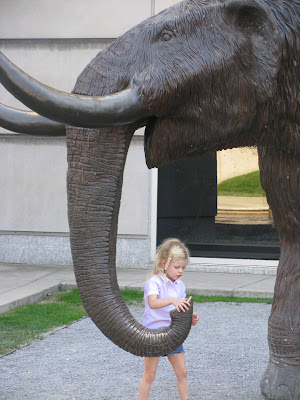 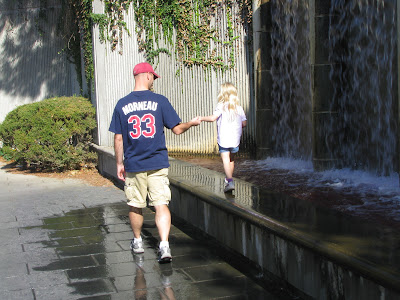 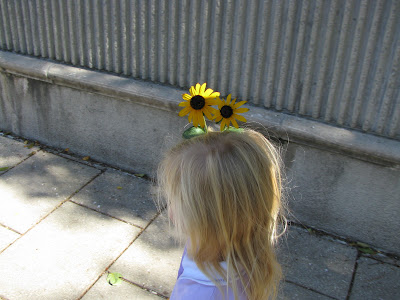 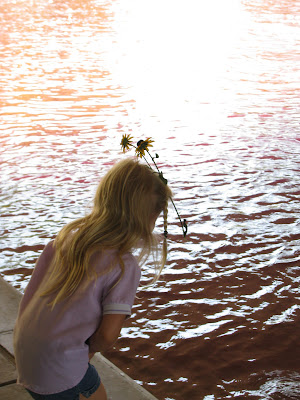 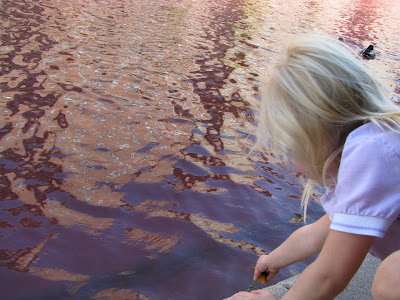 I'm still catching up on a bit of computer time this week, which means it's Wednesday and I'm still posting about the weekend. But it would be a bit remiss of me to not include a few pictures of a little stroll we took on Saturday, because, well just look at those flowers, would you? Saturday we found ourselves downtown returning some ill-fitting shoes. Like any parents of an outdoorsy almost-four-year-old (sheesh!) we decided to take advantage of our surroundings (and the ridiculous summery weather) and dawdle along the very oddly-hued Kool-Aid red canal. Audrey soon made friends with a stoic woolly mammoth and some much more expressive (or at least mobile) goldfish. But her real attachment came when she found a row of black-eyed susans. Faster than a mama can say, those flowers don't belong to us, a sprig was plucked and popped into her hair Daisy-Head Mayzie style. Where they stayed. Until some ducks came along and she tore her sprig in half and tried to share (you can just make out the head of the flower cupped in her hand in the last photo). I thought I'd pass them along to you, just in case you're having a flowers-in-your-hair sort of Wednesday.

(As for the shirt she's wearing, I remember seeing my little sister wearing it in photos taken some twenty-something years ago).
Posted by kristin at 8:38 AM

Labels: fall, out and about