For Posterity's Sake: Week in Review 89 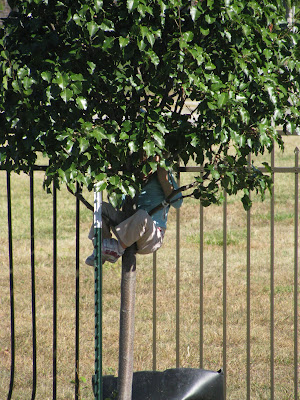 This picture was taken before I discovered her father had told her, in no uncertain terms, not to climb the trees. Notice the slightly smashed black bucket underneath the tree, used to give herself the little boost she needed.


We pulled onto the nature park drive, a tree-lined road that curves its way past a house and field and into an abandoned-quarry-turned-wooded wilderness with miles of trails, the woods as big or bigger than most Audrey has seen. She took in the view from the back seat. "Mom, this looks like an average forest. Anyone would say that."

Ahem. Last week was your average forest sort of week. We all have them. Somehow, those twenty-four hour days seem to shrink while the chores or meetings (insert your own obligation here) grow like stalks from Jack's magic beans. Mine often begin with Jason packing a suitcase for someplace like Ohio and leaving before the kids wake Monday morning. Next, I scrap all but the most necessary of chores. I fill the minutes that they might take up with trips to grandma's house and parks and moments to catch my breath on the couch (and debate whether I should just sleep there rather than make the long trek up the stairs to my bed). I forget to write down the funny things Audrey says and allow Nate to develop new habits like sleeping in my bed when he wakes up congested at two in the morning. By the time Jason gets home Thursday evening, the piles of "to do's" greet him at the door like a suddenly sprouted bean stalk forest, and a certain little someone wakes up every night wanting to reenact the slumber party that was the night before. The weekend is spent trying to catch up: on stories, snuggling, chores, and sleep. Slowly, the cogs begin clicking back into place, my watch is rewound, and I grab my pen and take to the business of writing things down. Little things. Funny things. After all, this is not your average forest. Anyone would tell you that:

Thursday, at dinner, Audrey looked at her dad. "Remember when the ants bit mom and you killed them?"

"That sounds like me," Jason said.
"You killed them with a gun, because you're a man."

Jason, who has maybe used a gun for skeet shooting, but who I've only seen handle the plastic gun for Duck Hunt, answered, "I'm not that kind of a man." But if he ever changes his mind, those ants better watch out.

Last week, I let Audrey check out The Land Before Time from the library. It had been a while since I'd watched it, which means, I ended up with a lot of explaining to do about why baby dinosaurs where wandering around by themselves and what happened to their mothers and what an earthquake is. Friday, while in the car, I found myself in for more.

"Mom, this boo-boo on my finger looks like the crack in the land."
"Like in the dinosaur movie?"
"Yes."

Then, she began to ask questions about the Tyrannosaurus Rex - why the others were afraid of him and why he ate other dinosaurs instead of plants. I told her that when God made dinosaurs He planned it all very carefully so some dinosaurs would eat plants and others meat, so not all the dinosaurs would be trying to get the same food. Audrey milled this around a bit.

"When God put the dinosaurs in, he did it very carefully?"
"Yes."
"So He wouldn't get bit?"

This week, we're trying to get back to our normal patterns while we steer clear of bites - ants, dinosaur, or otherwise - and take in this ever-growing forest of ours, one tree at a time.