I Think He Loves Me 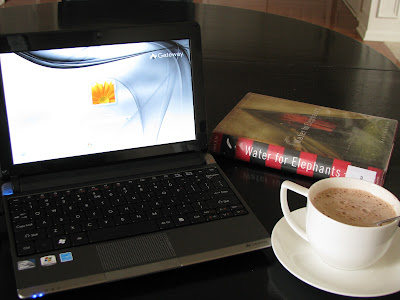 In the 1996 movie, Phenomenon, George Malley (portrayed by John Travolta) falls for the tough exteriored, yet soft-on-the-inside, Lace Pennamin (played by Kyra Sedgewick). Lace has a passion for making chairs, which (unbeknownst to her) George buys - every single one. Of course, Lace does eventually find out about George's penchant for her chairs, George wins over the girl, and his friend, Doc, puts another townsperson in his place when he explains, "Every woman has her chair, something she needs to put herself into, Banes. You ever figure out what Lisa's chairs were and buy 'em?"

This week, when I told Jason that I was having yet another problem with my laptop, he confessed that he'd been checking out some laptops that he thought would make my days (or at least my blogging) much easier. Last night, he bought me one. There's more than one way to fix a computer. 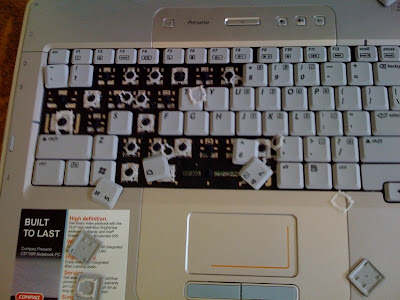 Just to give you an idea, the computer above is the one I've been using since I began blogging. Audrey performed this face lift on the keyboard in October of 2008 as I was attempting to load the car for a two-day getaway. The keys have stuck a bit ever since. (Notice the sticker in the left-hand corner of the photo. This is a picture just primed for Leno or Letterman, no?) Not long after that, my battery began to wear down, only lasting fifteen minutes or so before the computer would shut down, which meant that I had to be plugged into the wall to blog, because a fifteen-minute blogger I am not. Then, at the end of last year, I lost the ability to upload pictures from my camera to the laptop (we never figured out if it was a cord problem or a computer problem). So, each morning, I would run down to the computer in our basement, upload my pictures, save them to the blog, and then write the blog later on the laptop as I had time. That brings us up to last week when the pictures stopped loading from the computer in the basement to the blog. No idea why. I'm sure I would have continued on this way until Nathan grew old enough to toss the laptop down the stairs. 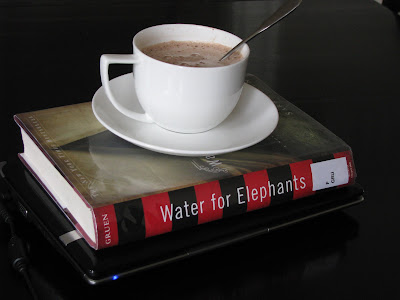 But why worry about such quibbles with a guy like Jason around? So here I sit, typing on a new working computer with a built-in SD card reader. Living with a man who buys your chairs and being the new owner of a computer that fits in your purse - double happiness!