For Posterity's Sake: Week in Review 62 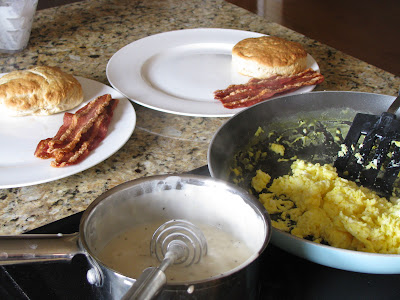 I love Saturdays. They have a rhythm all their own. It starts out slow: the rattle of a baby gate, the cry of an awakening baby, pajamas and unkempt hair. The day quickly progresses, a crescendo to banging pots and pans: lots of hands pounding out dough or whisking eggs before heading off to solve puzzles or update ipods. Saturdays are a gift of time. Time to sit and eat. Time to talk, to plan adventures and gardens that will be. Time to study baby smiles and dimpled hands and laugh when we hear him laugh in his sleep (what was he dreaming about?). Time to reminisce and tell the stories of the week:

(Let me preface this first story with an apology. A and C, this story is by no means a reflection of your relationship, but rather, a reflection of my ability to be a complete buffoon. And, it's too funny not to share.)

Jason often plays video games with my cousin online. Sunday, at breakfast, Jason began to talk video games (I was feeding Nathan and not 100% focused on the conversation):

"Your cousin might get Tiger Woods golf. He's moved back in with his wife and kids."
I look up. "What?"
Jason, realizing I've missed a step, starts to tease. "Yep. Turns out he only thought his wife was working nights. The second kid isn't his," Jason laughs. "I'm talking about Tiger Woods."
"I was so confused," I said.
Audrey looks at me. "The second kid is someone else's."
(Yes, now would be an excellent time for us to start having our Tiger Woods discussions out of ear shot of our daughter - nothing like having your three-year-old connect the dots for you).


Tuesday morning, Jason had left a box of Rice Krispies laying out on the counter. Audrey saw them and told me she wanted some. I poured them into a bowl.
"No. Not like that," she said.
"Do you want them with milk?" I asked.
She agreed. I poured. She looked at the bowl thoroughly disappointed.
"That's not how they come at Mamaw's," she said.
"Honey, they don't come out of the box as Rice Krispy Treats."

Tuesday afternoon:
"What does M & M start with?"


Thursday morning she said, "Daddy's not here. He went to work. I don't like when Daddy goes to work because I want to keep him." A few minutes passed. Then she asked, "He has to go to work to buy us money?" I told her that her father earned money, but that she was right, he basically used his time and skills to buy us money.

Thursday afternoon:
"If Daddy is at work does that mean I get to hang with you?"


This week, Audrey has asked to play hide 'n seek several times. It goes something like this:

She asks me to create a hiding place for her using the sheets and pillows of the master bed. She hides and asks me to come find her, portraying some sort of character (her favorite is a scary skeleton - as I said yesterday, she stays true to her season). I wander around the bedroom and surrounding rooms growling like a scary skeleton (they do growl, you know) until I find her hiding (always) under the sheets. Then we play again. Sometimes she brings friends (in the form of stuffed animals) to hide with her. This morning, she began teaching the game to Jason. She showed him how to create a hiding place. She brought a few friends along and hid them under the sheets. She had Jason join her underneath. They sat quietly, hiding. A few minutes passed. "We need a skeleton," she said.


Tonight, we took advantage of the warm weather and grilled out for the first time. Jason told Audrey she could come outside with him while he prepared the grill. She grabbed her coat and he helped her slide it over her arms. "Oh, thanks," she said. "You're my big helper."


Now, the kitchen table has been cleared, bellies are full, and thoughts have moved to quieter rhythms of Saturday evening: a collecting of toys, the giving of baths, slumbering of babes, and settling in with cups of hot chocolate to watch a movie. Here's to Saturdays and the rhythm of home. I hope you're enjoying yours. 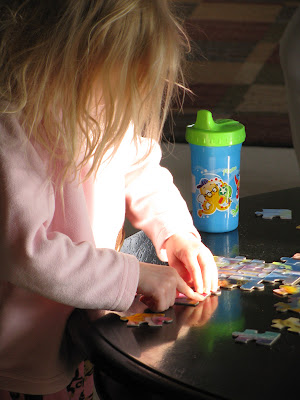