For Posterity's Sake: Week in Review 60 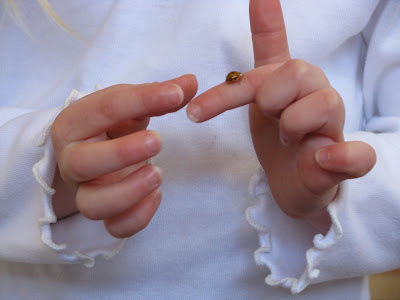 The theme for this week has been fever, as in Spring Fever and those ranging between 99.6-100.7 degrees. And, while it seems as if the physical fevers should have more pull on our days, it's that spring one that has staying power. Perhaps, that's why this first week of March, with its high-forties-degreed weather and resurgence of the sun, of whose finger-like rays I try to stay within easy grasp while going about my work, has us feeling a bit joyful, in spite of our health-challenged selves. Maybe it's the brush of warmth against our faces hinting at promises of walks and picnics to come that's making us smile. Or, maybe it's the coos and laughter from a certain little guy every time he peers closely at his Daddy's face as if he's already figured out who the fun parent is in this duo. Of course, the following moments with Audrey didn't hurt, either:

On Sunday, Audrey was in the bathtub splashing around with a toy replica of Nemo. She also has a replica of Marlin (Nemo's dad) that, apparently, she couldn't find. She told me that Nemo's dad had gone somewhere.

"Probably to a meeting," she said.

My little sister is about to have her first baby (not "about" as in any day now, about as in a month and a half from now). Audrey and I were talking about this on Wednesday. Some friends will be throwing her a shower soon.

"Your aunt is having a baby, so they are throwing a party called a shower," I said.

"Her baby can't have a shower. He's too little. She has to wait until he's bigger," she said.

On Thursday, she asked me if she could move to the neighbor's house.

"I want to live with Jaila," she said.

When I explained that she couldn't live both places and asked if she didn't want to live with us anymore, she said, "Well, I want to play with Jaila."

Later that day, she found the lady bug seen in the picture above. Nothing makes this girl happier than discovering a lady bug around the house. She carried him around for the next fifteen minutes (and would have carried him around all day had she not dropped and lost him) referring to him as her best friend. I overheard her telling him (in no uncertain terms) that he needed to raise his voice. 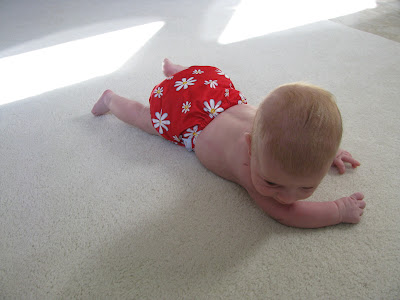 (Is "blackmail" the first word that pops into anyone else's head when viewing this picture?)


Last week, a friend called me to tell me about a great online deal she found on some FuzziBunz pocket diapers. The catch? The only ones on clearance (for almost half off!) were daisy-patterned. I thought about the future ramifications of dressing my son in daisy-motifed diapers for all of three minutes before I ordered them. Nathan was wearing this red pair (I also have them in blue) on Thursday when he let something go that would make my uncle, the truck driver, blush. Audrey was sitting next to me as I changed his diaper. She looked down at the filled diaper with its floral print.


This morning, Audrey asked, "Can we go find spring?" (We let her watch Franklin and the Green Knight a couple weeks ago in which Franklin goes on a quest to bring back spring). Blame it on the sunshine, or the sound of the basketball drumming my neighbor's drive, or the daisies that have been springing up around here lately (even if only on bums), but I'm ready to pack a snack, grab a middle-weight jacket and go. But our quest will have to wait. The medicine I gave Audrey this afternoon to rid her of her cough, has managed to do something I haven't been able to convince her of for a year-and-a-half. Twenty minutes ago she decided to take a nap. As grateful as I am to see her finally having a peaceful slumber, it's kind of freaking me out. I guess spring will just have to wait. At least until tomorrow.

Wishing you a weekend filled with flowers in unexpected places...
Posted by kristin at 11:14 AM