For Posterity's Sake: Week in Review 103 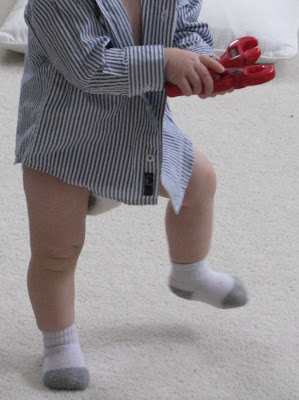 Getting down Risky Business-style with, ahem, hardware tools


Some things you only see on television, like people bursting spontaneously into song when overcome with emotion. Unless you live at my house (or with your own exuberant four-year-old, with a penchant for the loud or dramatic). I find myself (and the other members of my family) the frequent participant in spontaneous dance parties, hosted by Audrey. They begin in the early morning. She's discovered that if she opens a specific cabinet drawer and stands on the lazy susan inside, just so, she can reach and turn on the ipod. She selects a song, her brother begins to bounce up and down to the beat, and the day officially (and ever so musically) begins. Some days become bookends, the evening dance mirroring the morning with Daddy added to the dance card. Sometimes, Audrey coaxes a song out of him as I make dinner. Others, she once again takes matters into her own hands and requests a father-daughter dance to These Are a Few of My Favorite Things. And, there I stand, wooden spoon dipped in a pot of simmering soup, watching a musical unfold before me. A few more of my favorite things from the week past:

One of our neighbors in Virginia was a woman who had suffered a stroke. A vibrant grandmother who watched her grandsons while her daughter worked and attended school, the only telltale signs of her stroke were a limp and a vocabulary cut to two words, "hi' and "uh-huh." One might think this would limit her ability to express herself, but she was a daily reminder of the contrary - that one can say so much with so little. I had never known that one word could be intoned or used in so many different ways - that it could allow someone to be so clearly heard, until I was introduced to her "uh-huh." This month, we've been introduced to Nathan's "uh-huh," low and rumbly and used to convey all the words he has yet to learn, and consistently able to collect a smile from his parents.

Audrey, of course, has no trouble conveying exactly what she means. On Sunday, Jason was asking about some of the pictures she had drawn on the patio door, specifically some that looked like little guys wearing glasses.


Monday morning she was singing through breakfast. Suddenly, she stopped and looked at me. "Do you want me to turn myself down?" she asked.


Monday afternoon, she and Nathan both received flu shots. Nathan had three other vaccines as well. He cried for about five minutes. Audrey attempted to hide under a desk to escape the nurse, screamed before the shot was even drawn, and cried for about forty-five minutes after. At home, she requested that she be allowed to keep her winter knit hat on (a little striped number with a pom-pom on top). Then she took her pants off (I believe to get a better view of her band-aid). In an attempt to abate the crying, I told her she could watch a Leap Frog DVD. Jason came home to find her staring at the TV with a stocking cap on and no pants. "Why don't you have pants on?" he asked her. She explained that she thought it might make her feel better.

He relayed this story to me at dinner (before dinner, Audrey had been given a dose of Tylenol to help numb the pain). As he finished, she said, "I thought that either Tylenol or my pants off would make me feel better."


Saturday morning, I was telling Jason how a friend had posted on his Facebook page that a television show had authentic computer code written on the whiteboards seen on set. However, the actor performing the code was doing the development on a Dell rather than a Mac, when the code won't run on a Dell. (Being a former acting student, Jason is often pointing out discrepancies in movies to me). I segued into mentioning how many professional bloggers I've noticed use Macs. "People love their Macs," I said.

"Who is Max?" asked Audrey.


These early days of January are full: yearly check-ups to make sure we're all on course; the kitchen island covered with lists of projects as we map out our goals for the year; new photos in the form of the latest ultrasounds and Jason's first passport showing us the new adventures underway. From morning to night, year after year, it's a dance. We feel blessed to say, our card is full.
Posted by kristin at 3:22 PM