For Posterity's Sake: Week in Review 106 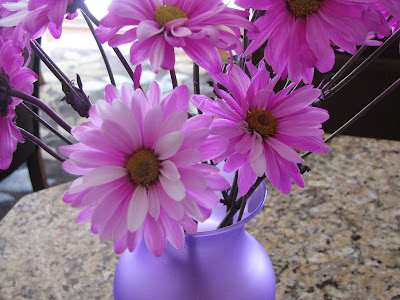 Audrey likes to surround herself with beauty. She spends her free time creating works of art, decorating the house by hanging her favorite toys from twisty-ties, and (when grocery shopping with Daddy) begging for fresh flowers. Last week he obliged her request, allowing her to pick out a bouquet of her choosing - some popping pink daisies. Tucked into those blossoms were a few white petals, stark against their fuchsia counterparts. "I'm going to pull out the white ones," Audrey said.

Four is a year of flowers just because, and learning that every life is sprinkled with a few white petals against the bright - petals that if removed, make the beauty unrecognizable.

Our moments last week, a little fuchsia and white:

On Monday, Audrey introduced us to her stuffed animal, giving her a first, middle, and our last name. I can't remember the name now, but after announcing it, Audrey concluded, "She's invaded (related) to us."

Tuesday evening, I was attempting to get Audrey ready for bed. She had other plans, plans that involved jumping up and down on her bed and not putting on her pajamas. I told her I was leaving to go downstairs in two minutes whether she was ready or not. I set a timer. The timer went off. I went downstairs and told her to come down after she was dressed. She came downstairs, dressed but distraught, seeking out the comfort of her father. "How do you leave a girl who you love upstairs by herself for five minutes?" she asked.

Thursday afternoon she came home from school with a new toy in tow, a plastic "dragon" with a moving scale. She played with it for a while, before deserting it at Nathan's eye level. He found the dragon and began playing with it. He carried it over to the farthest part of the kitchen and set it next to the baby gate before losing interest. Audrey had informed me that the dragon could swim, so that night as we made our way to the bathtub, she asked where he was. By this time, I'd forgotten about Nathan carrying the dragon off. "I'm sure he's wherever you left him. Go look." Audrey ran downstairs to search. A few minutes later she came bounding up the stairs, laughing.

"I didn't know it could walk!" she said, reveling in the fact that the dragon was by the baby gate, definitely not where she had left him.

Friday, Audrey began petitioning once again for a baby sister instead of a brother. "Two little brothers is just silly," she said. "But a little brother and a little sister isn't silly." Knowing that we couldn't do anything to change her fate, she arrived with me a little later at a play date, unappeased. She began talking to one of the other mothers (a mama of two girls and a baby boy). "You have two sisters and a brother in your family," Audrey told her.

"Yes," my friend said, "but someday we hope to have another little brother." She went on to explain that her family would be happy with whatever God gave them and that God might not give them another brother.

While Audrey spent the week learning the ups and downs of life at four, Nathan mastered the art of moving up and down. He likes to bend his knees and bop around to music. Monday, he walked over to the counter that holds our ipod, bounced up and down and then looked at me expectantly. I turned the music on and he began to dance. Then he stood, and spun in circles, wobbling about dizzy-footed when he finally stopped.

His other physical feat last week was climbing in and out of one of the kitchen drawers. Sometimes, he clears the drawer out before clamoring inside. Other times, he plops right on top of the pile of cookie sheets and slowly rises to his feet as if surfing, smiling when he raises to his full height. I have seen his sister scale the refrigerator using only her hands and feet. Drawer surfing is only the beginning.

As for our littlest, this wisp of a dream biding his time until he's ready to introduce himself, all I can tell you is this: he knows Kung Fu. I don't know who taught him. Perhaps, we've been watching too many episodes of Chuck. But I will gladly take those side kicks and jabs. There's a whole lot of fuchsia mixed in with those white petals. 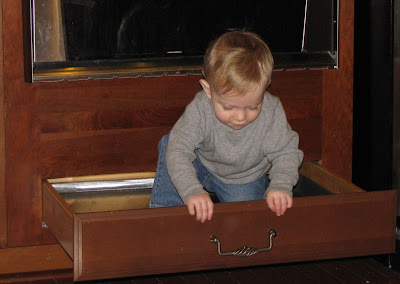