For Posterity's Sake: Week in Review 75 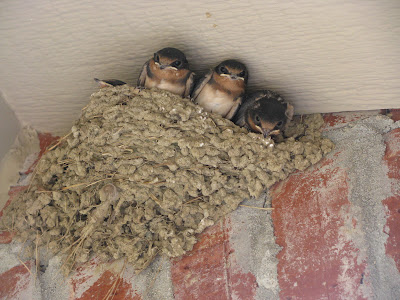 picture of birds tucked under our stoop by Jason

Nate and I are beat. We spent yesterday afternoon lolling about poolside: Nate asleep on my lap and me reading and doing needlework, alternatively. (I know, the two of us are quite the pair of pansies. I even moved our chair half a dozen times in an attempt to stay in the shade. My friend, Cindy, said if we moved any further back, we'd be in the toilets. She is British and when she says it, it almost sounds like a lovely predicament to find oneself in, which made me laugh all the more). Audrey took to the water with the urgency of someone trying to catch a snowflake before it melts. She propelled her buoyed body through the water in a manner that read: floaties, you may be holding my arms up, but I'm the one wearing you. She jumped in and out of the water and from pavement to rafts, regardless of if they belonged to us or not (they did not). She performed as many laps around the pool, her bare wet feet leaving marks as they slapped the concrete, as she did in the pool. More than four hours later, we packed up our things. Other children had grown hot and tired, like limp flowers in need of a drink. Audrey was still skipping around the pool, ready to seek out another raft. "You know what she reminds me of?" Cindy said, "a caged bird being let go for the first time."

I have rarely heard a more apt description - of anything. Audrey is boundless joy in human form. Boundless joy that does not take a vacation, day off, or nap. Sometimes, after the end of a day that feels stretched by the sun and a husband's absence in Minnesota, boundless joy can make a mama feel as if she might fall asleep on the couch - or standing up. Sometimes, at such a time, the humor provided by boundless joy is just what that mama needs:

On Tuesday, Audrey hit the back of Nathan's diaper. He didn't react, but she was sent to her room, where I explained that we never hit. (This would have probably been sufficient, but I tend to amble on a bit.) I told her that what she did to Nathan was not kind, nor did it show him love and respect. "He's too little to play rough, Audrey, and when he's bigger, he'll probably hit you back." She was silent as we left her room. Then she asked, "Is he growing today?"

With Jason traveling, I had to let Nathan hang out on the floor of the bathroom while I gave Audrey a bath Wednesday night. She splashed a little water. He laughed. She splashed some more. He laughed harder. My cell phone rang. I picked up when I saw it was Jason. Audrey and Nathan began laughing hysterically. I look back at Nate to see that his face is wet. Audrey splashed water at him. The two laughed so loud (and the water, in spite of my objections, started coming so fast) I had to hang up. It took two bath towels to clean the room up.

Thursday, Audrey had a cleaning at the dentist. While in the chair, she announced to the dentist and his assistant, "Sometimes I drink water out of the bathtub. Mom and Dad tell me no, but I do it anyway."

Later, while running errands, she said, "Mom, you tell Dad what to do and he tells me what to do, right?"

Nathan is awake after a marathon nap. He has returned to his usual, face-grabbing, nose-eating (we think it's his version of kisses) self. After news of an impending hail storm, a flight cancellation, a creative reroute, and car rental, Jason is home. As thoughts linger to the weekend, I am catching a second wind. Not a moment too soon. Audrey runs toward me: her smile, her laugh, her voice - boundless. "Hold me! Hold me! Hold me!" I know why the caged bird sings.