For Posterity's Sake: Week in Review 41

Audrey and I spend the majority of our hours together, and yet, each week she surprises me. Sometimes it's a newfound athletic ability (although, I'm not sure that scaling the outside of the refrigerator using the door handles to pull oneself upward - monkey-style - has been deemed a sport yet). Other times it comes in the form of creative repurposing (as when she comes out of my closet with a pair of my underwear on her head and tries to convince me she's wearing her new "hat" to Kroger). Most times, I find myself amazed by her thought processes: wondering where she comes up with her ideas or how she's become so clever so fast. Here are my favorite Audrey musings from this week:

After our foray to the pumpkin patch on Monday, Audrey was eager to show the pumpkins off to her Dad. "This is my pumpkin and this is mommy's pumpkin," she said, indicating who picked out what.

Jason looked at the pumpkins and asked solemnly, "Where is my pumpkin?"

Audrey looked down at her pumpkin, cradled in her hands. Without saying a word, she looked at Jason and held her pumpkin up to him for him to take as his own. I think we have the makings of a true Daddy's girl.

We were almost late to preschool this week. Normally, Audrey is up an hour early on school days eager to get ready and go play with her friends and teachers. This week, she had a slight hang-up. Each time I tried to get her dressed she complained. "I want hot clothes!"

"You want hot clothes?" I asked to see if I heard her right.

As many times as I tried to reassure her that the pants and sweatshirt I was about to put on her would make her warm, she would not be comforted. After considering throwing the clothes in the dryer to heat them up, I finally convinced her to let me dress her so we wouldn't be late. I couldn't help but think of visits to my grandmother's house when my sisters and I would get out of the shower to find that our grandma had set our clothes on the fire hearth so they would be toasty when we put them on. She's not off her mark, this little one, there is definitely something to putting on hot clothes. (I fear reliving this same incident come her teenage years but with a different definition of "hot" in mind).

Emmy ran to the backdoor Thursday afternoon as Audrey and I were finishing up a batch of pumpkin bread. Trying to get the pumpkin batter poured into bread pans, and keep Audrey's hands out of the already-poured pans, I asked her to let Emmy out. A few minutes later I asked her to see if Emmy was still in the backyard. Audrey informed me that Emmy was no longer inside the fence. I, of course, had pumpkin batter up to my elbows at this point and needed to get the bread pans into the oven before Audrey decided to "mix" them. I asked Audrey to go to the front window and see if Emmy was in the front yard. Audrey saw this as an invitation to open the front door. She couldn't see Emmy outside, and told me she was going to go find her. I explained that going outside wearing a tank top (we had taken off her cardigan before baking) and no shoes in mid-forty degree weather was not an option. She fixed this by putting on her rain boots. I frantically washed my arms off as I yelled for her not to go outside. Arms dripping, I ran to the front door. "There she is!" Audrey said. Emmy had run around the corner back onto our street, and bounded up the sidewalk and the driveway back into the house. "Where did she go?" Audrey asked. I told her I had no idea. "I think she went to Target," she said.

It was Jason's turn to put Audrey to bed on Thursday night. As she was being tucked in, Audrey saw her children's Bible and told Jason she wanted to read him a story. She began flipping though the pages of her Bible, telling Jason who the people in the pictures were. As she pointed to a picture of Adam and Eve, she said, "This is Adam, and this is Easy." Ahem. 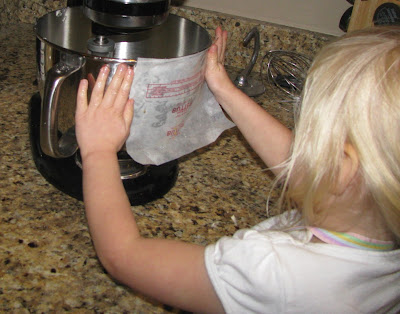 Oh, and you can decoupage your mixing bowl - just in case you're bored and feeling crafty and have discarded butter wrappers laying around.
Posted by kristin at 12:26 AM