For Posterity's Sake: Week in Review 29 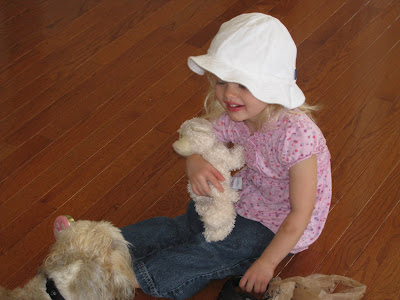 This morning as I was dressing Audrey, she said, "Mama, I want to wear a hat today." We found this little white fisherman's hat, which seemed to suit her fancy just fine.

Audrey is still focused on pointing out men anywhere she sees them. Although, this week, she has taken her "man" concept and use of the term a little further:

On Saturday morning, while dancing in her Dad's arms, she said, "Look! I'm up with my man."

On Tuesday we met up with some friends for lunch (two of them the toddlers who came to visit for a couple days). The restaurant had helium balloons tied to a rail. The girls, of course, were determined to pull them from the rail. Failing miserably, but refusing to give up, we saw one girl after another have her efforts rewarded by different gentlemen (waiting in line to order) pulling out their pocket knives and cutting the balloons down. I tried to loosely tie Audrey's to her wrist, which failed. All three balloons kept finding their way to the ceiling, followed by three begging girls asking for them to be pulled back down. After one popped against the ceiling (almost inducing a heart attack in the lady dining at the table next to us), I told Audrey to wait until we were ready to leave and I would get her balloon for her. She looked at me and said, "Do I need a man?"

Audrey has also had some interesting questions concerning God this week. Jason had to leave Saturday afternoon for a meeting in Chicago through Wednesday. Knowing it was the weekend (although, I still don't know how since toddlers don't carry day planners), she kept telling him that he shouldn't be leaving because work was closed. Jason told her that even though work was usually closed, he still had to go. She asked, "Did God open work?" This was a question repeated frequently this week as she missed her Dad, broken up by the random (and also much repeated) question Wednesday of, "Did Jesus make mud?"

Tonight as I dressed her for bed she caught sight of the clean diaper I was about to put on her. "It's purple," she said.

"Did you go upstairs to get that for me?" she asked.

"Oh my!" she said. Then yelled into the other room, "Thank you!"