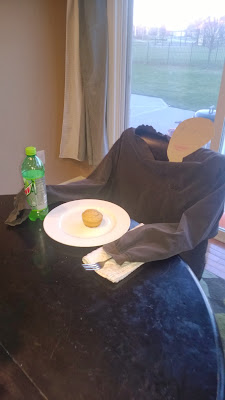 Sometimes, you have an inkling that you might be loved.  Love follows you like a shadow too shy to tap you on the shoulder, but you can feel the warm fog against your neck.  Other times, you know you're loved.  You know, because while you travel to the UK, your children create "Fake Jason" and carry him around.  Everywhere.  For FOUR days.  Until, Fake Jason's head mysteriously becomes severed from his body and is mourned (before being replaced by a much freakishly-smaller head).  Fake Jason eats dinner with the family (where he gets fed and asked questions about his day), later he is moved to the desk by the computer or spread out across the couch to enjoy some television.  Finally, I find Fake Jason camped out on my bed.  "Don't forget to cover him with a sheet!" my daughter yells on her way to her room.

I dash off a text to Basingstoke with a picture of Fake Jason attached, "You better make it home in one piece. I don't think I can take 12 years of this."  Sometimes, love smothers those left behind.

Luckily, for us, the time away is never long and each time we find a way to mingle our respective time zones and fit in a daily phone call or two, even if only for five minutes.  But we've found the easiest way to slip ourselves into each others' days is through texts.  This time, Audrey wanted in on the action.  Since she doesn't have a cell phone of her own, I got to eavesdrop.  A little sampling (typed as written):

How are you  I miss you  I move the man I made.to look like you.  When I was writing to you the fake man was sitting at the table after lunch.some times he is playing the race game.i put him to sleep.how is UK warm or cold. From Audrey with love hope hoping you are happy.

(A brief interlude to explain: before he left, Audrey asked Jason to take her and Nathan on a shopping spree to buy me some gifts that would make my week go a little more smoothly.  The gifts included things like bagels for breakfast, a gift card to eat out one night, and - on this particular day - a couple magazines for my reading enjoyment.  I'm not in on the joke below, unless Rachel Ray and the makers of Family Circle are my heroes.)

Mom said she likes her gifts the hero magazines   Ha ha.she thinks the other presents are heroes to though maybe she would say it a different way.we put up the lights out side the boys found interest in zanes little play house I'd some times join them while I rote the phone rang I think it was for moms dentist appointment I had to run the phone to mom.i lost the fake mans face what good is a man with no face.we made a decoration out of cranberries love love love you love Audrey with. Love.love love love.

Thanks Audrey that was a great summary!  I agree that fake men are less useful without faces.


We're glad Jason is home and closer than a text away this week.  Maybe, just maybe, I'm equally glad that Fake Jason's first (relocated) and second heads have been properly recycled and are no longer resting on a pillow beside yours truly.