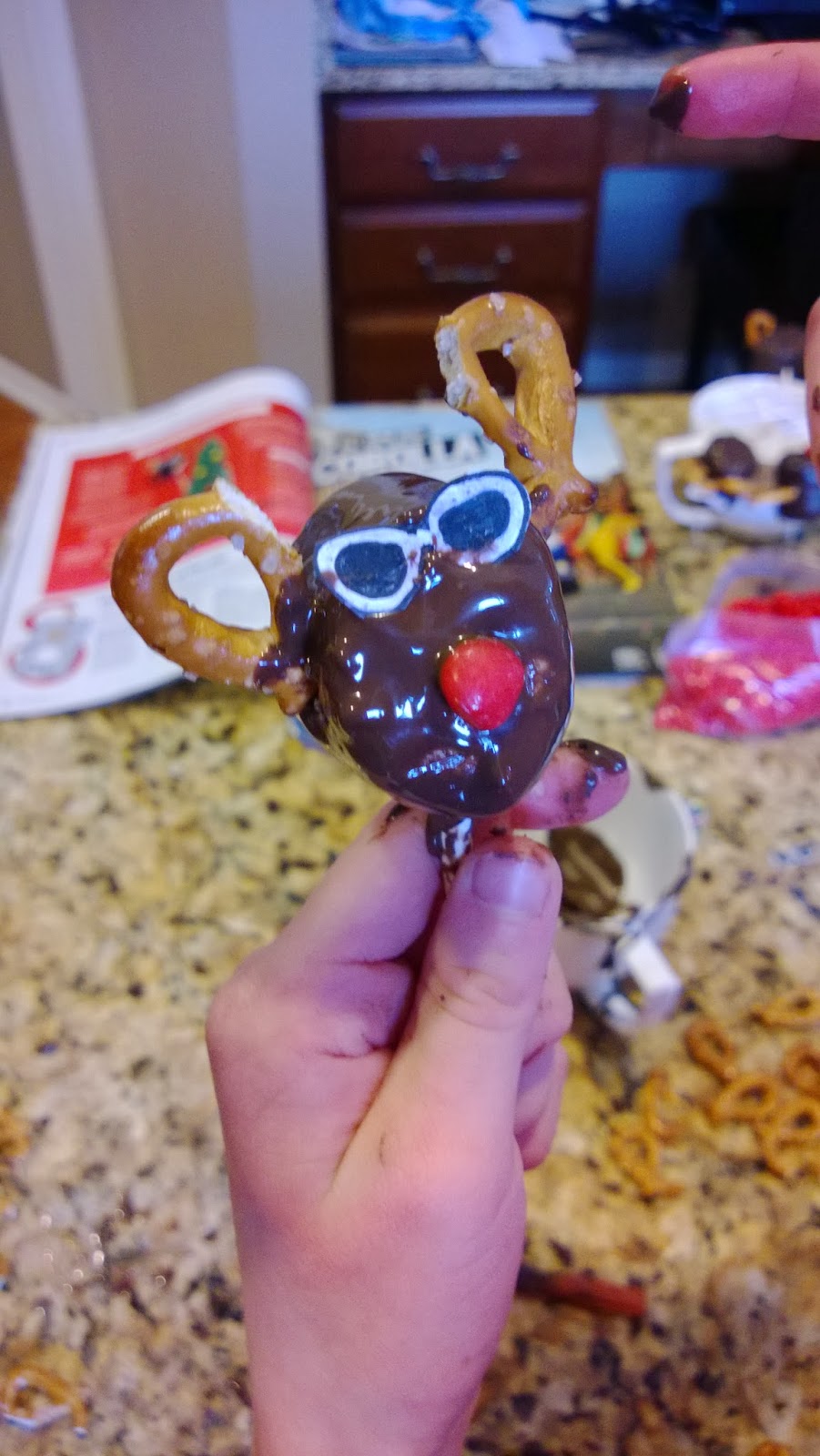 Yesterday, Audrey and I finished the school day with a rousing game of Conquer Mesopotamia, a "board game" in which the person who reaches the finish line (moving squares by rolling a die and doing whatever action is on the square) first, wins.  Some of the squares contain questions that, if answered correctly, allow the player to advance more squares.  Audrey, always looking for an angle to position herself for a win, asked for extra questions any time she fell behind.  I was happy to comply, asking questions such as: "Nebuchadnezzar's beautiful wife wants to return home to Persia.  What does he build for her?"

Answer: According to Audrey, it's the Hovering Gardens of Babylon.  I let her move ahead two squares.  After all, you know at least one of the poor sods forced to build that wonder felt like those gardens would never stop hovering over him.

Audrey won by three squares - not that any seven-year-olds were counting. 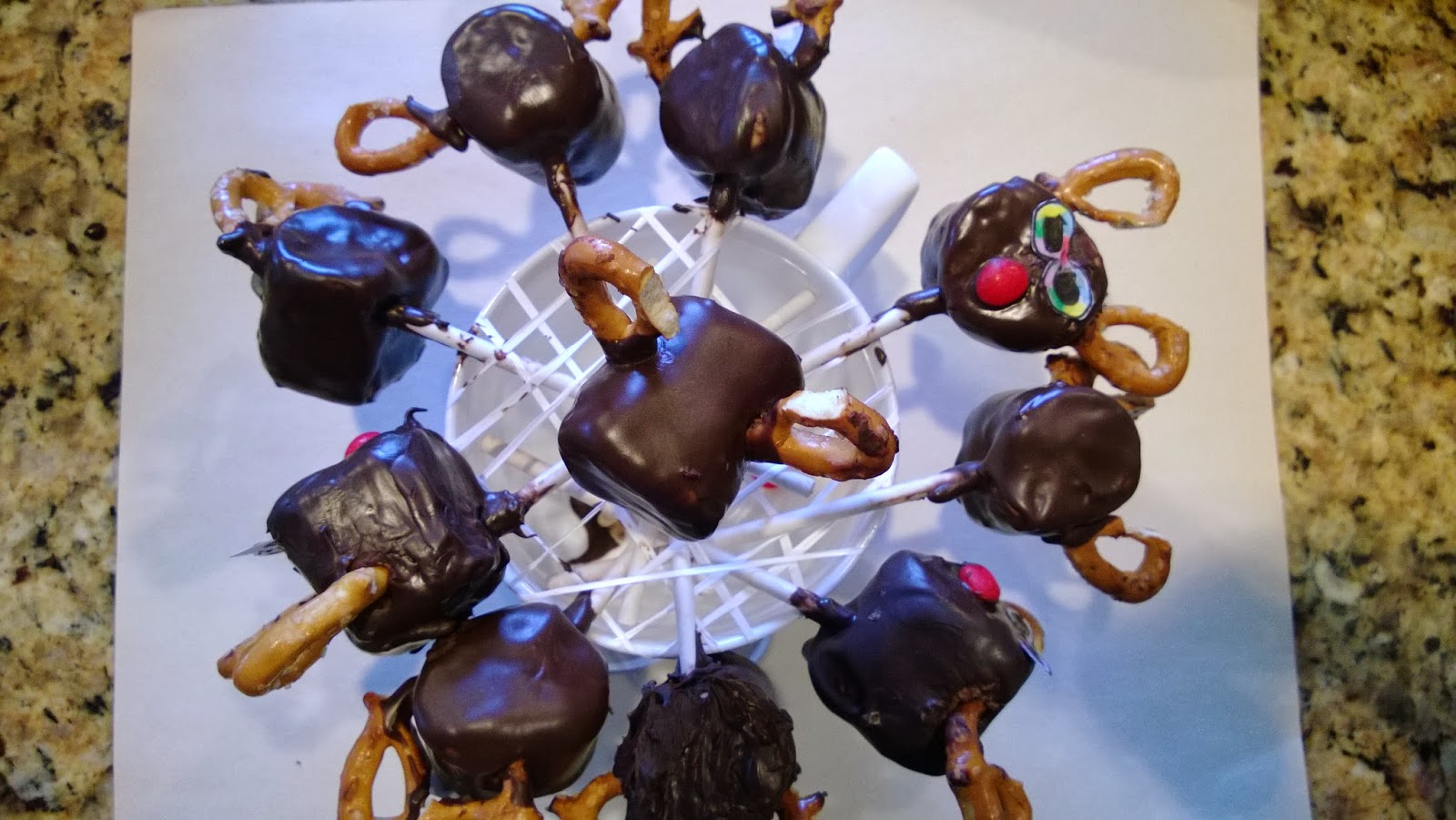 After school, we moved onto a little culinary project - chocolate-covered reindeer for Audrey's Girl Scout Christmas party.  I stole the idea from the December issue of EveryDay with Rachael Ray.  Ours didn't turn out as shiny bright as Rachael's reindeer.  Ours looked a little like distant cousins of hers - the offspring of those that wed illegally.  (Pay attention to that one in the rainbow sunglasses, he'll be important later.)

I set up the project "pieces" (pretzels, red hots, marshmallows, sucker sticks, and sunglasses that Audrey had traced and colored - found online at www.peepseyewear.com on princess paper dolls) and melted the chocolate.  Then I got out of the way.  (If a hovering mother were that great, they would have made her the eighth wonder of the world.)  We ran into one little hiccup: how to store the marshmallows while they were setting.  Florist friends would have probably had something awesome on hand to solve the problem.  We had a teacup, dental floss, and scotch tape.  It wasn't perfect, but neither was Rudolph. 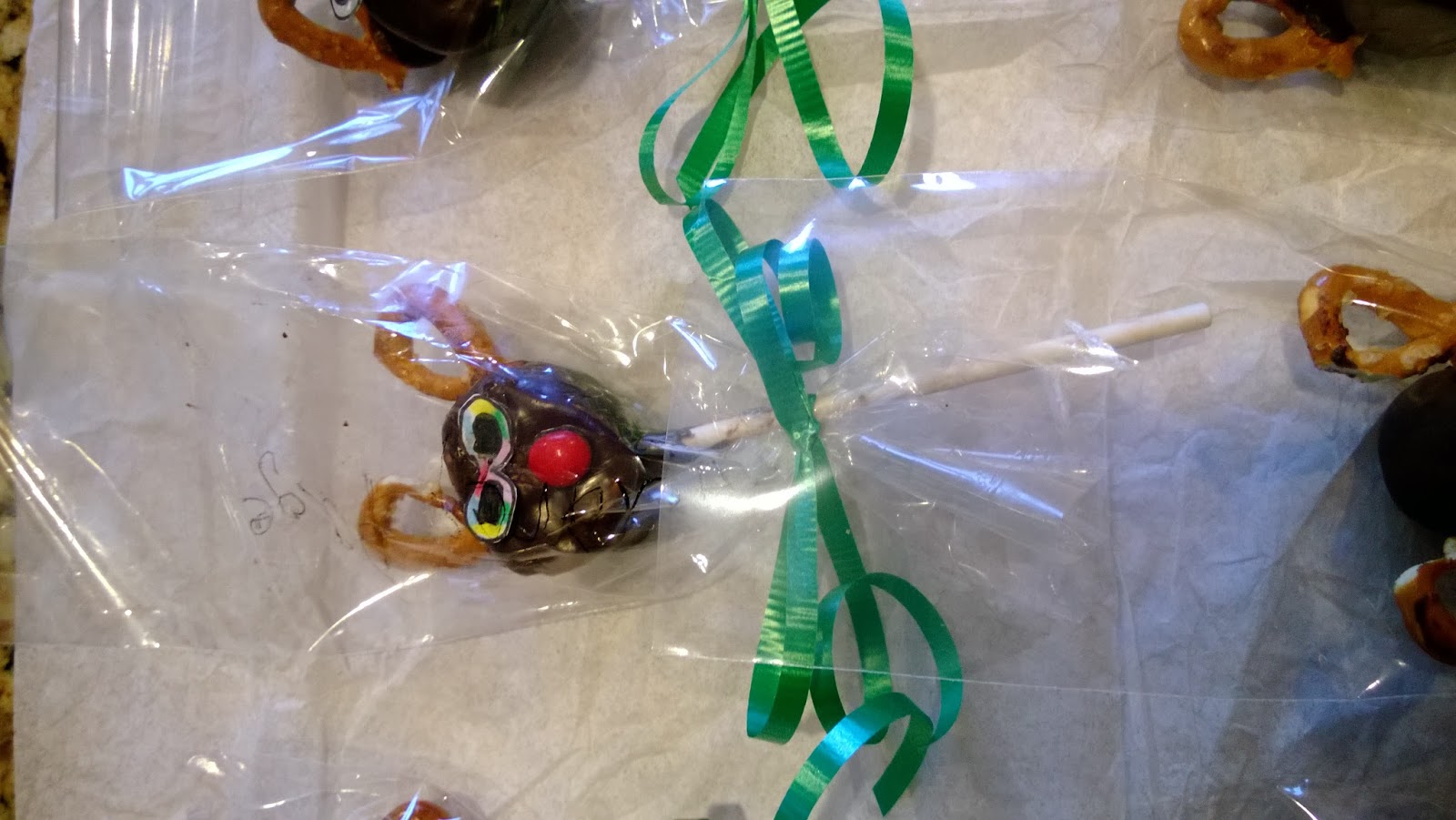 Audrey got down to business, humming "Deck the Halls" and decking marshmallows with antlers and sunglasses.  Remember that guy in the rainbow shades?  That's her Sistine Chapel.  Let's call him Liberace, shall we?  She became very particular when it came to Mr. Rainbow Shades.  She found out which plastic bag Liberace had been assigned and scrawled her name across it (you can just make out the last few letters of her middle name in the picture above, just in case her first name wasn't sufficient).  She may have made the reindeer to share with her Girl Scout friends, but no one was getting their hands on Rainbow Shades but her.  After all, that's what Girl Scouts is all about: leaving the world a better place, and marking your territory (we might be a little shaky on the pledge). 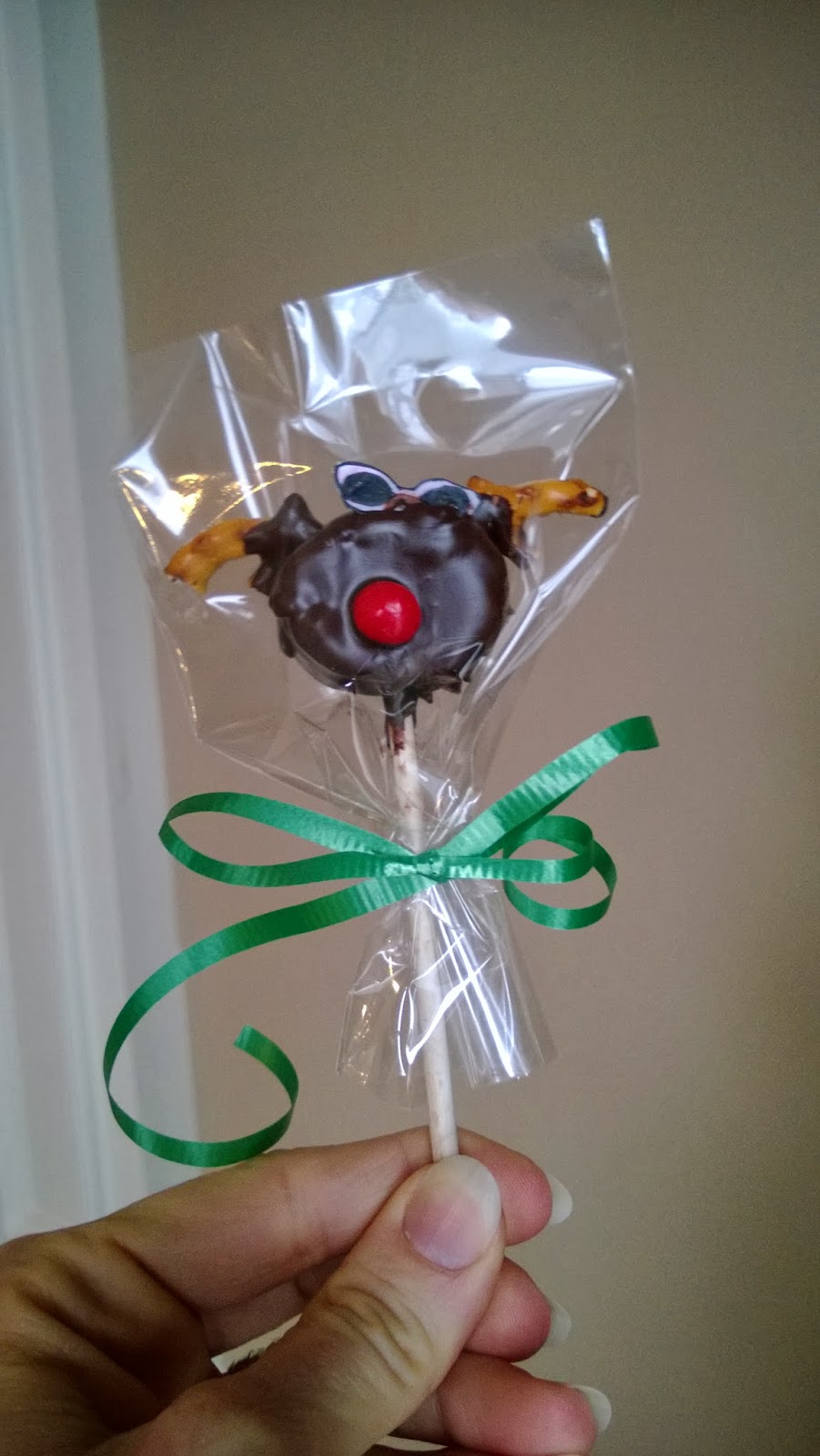 As for me, I had a little love affair with this guy.  Oh, those upside-down antlers.  Sigh. 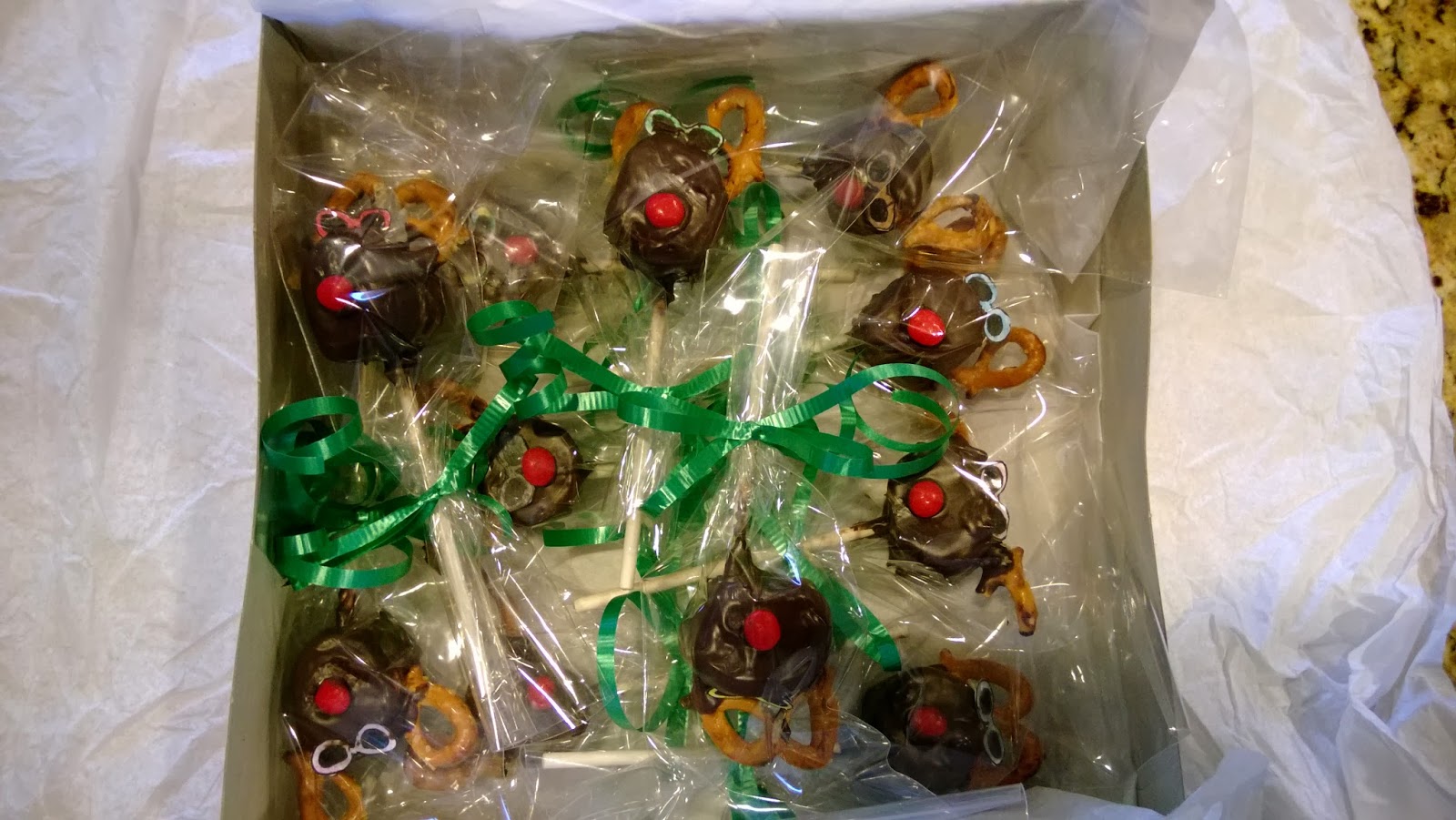 Audrey reunited with Liberace at the Girl Scout party and all was bliss.  I accidentally took my scissors to one of the bags while trying to curl the green ribbons.  Which just goes to show you ladies: don't get too fancy with your packaging, or you just might lose your bag. Or patch it with scotch tape.  Your choice.
Posted by kristin at 3:07 PM