For Posterity's Sake: Week in Review 54 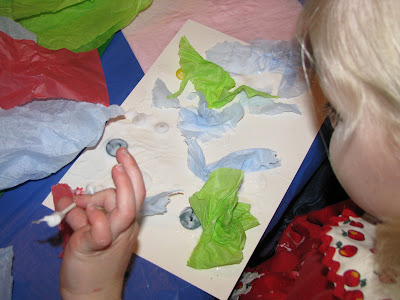 Lately, Audrey has been referring to her hands (and our hands) as spiders. It is not uncommon to hear, several times a day, "What are your spiders doing now?"

Audrey's spiders move like arachnids on five pots of strong coffee, dispensing a half a bottle of glue in the squeeze of a fist, squeezing her little brother's "spiders" before mama's spiders can intervene, and matching puzzle pieces in a flash.

The only thing that moves faster than Audrey's spiders is her ever-expanding brain. Here are a few of the ways she's shown off her run-away brain this week and left us in the dust, just wondering what comes next:


On Monday, while playing with her Grammy, Audrey crawled underneath the turned-over frame of a papasan chair. Realizing that she had barricaded herself in, she said," I want out of this mistake!"


We've had the good fortune of having friends bring us dinner for a couple weeks. Monday afternoon, Audrey asked," Is someone bringing us dinner today?" After I told her yes, she asked, "Can they bring me a donut?"


"You have big hair," she told me Monday afternoon. "Why did God give you big hair?"


While eating cheese as a snack later that day, she said, "The cheese makes me feisty." She meant thirsty, but feisty seemed equally appropriate.


Audrey's uncle taught her how to play the card game Go Fish several weeks ago. We've tried to teach Audrey to yell outside rather than inside. She takes advantage of any outdoor time, be it in the backyard or traveling via cart from store to car, to practice her yelling. Her favorite phrase to yell is, "Go Colts!" Thursday, after leaving a store, she yelled, "Go Colts! Go Fish!"


Friday night when Jason got home from work, Audrey ran to give him a hug. "You can take that to work with you if you want to," she said.
"What?" Jason asked.
"The hug," she said. 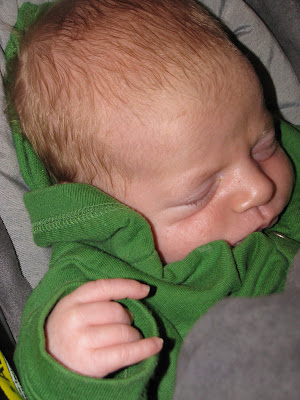 We will take those hugs of hers and carry them with us. We'll hold on tight and squeeze her as often as she'll let us, because those busy little spiders of hers were once half their size and looked a lot like her brother's. And, that little boy? Well, he doesn't look like the sunken-cheeked newborn we brought home a month ago. Those cheeks have filled out and we love to watch them lift with his perfect crooked smile. It's only a matter of time before his hands begin to busy themselves with glue bottles, squeezing his sister's hands, and stealing her toys. Oh, those little spiders. They move too fast.