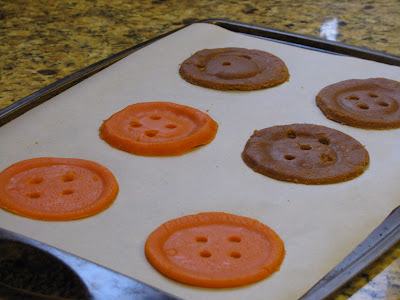 If baby number two came with a label, it would read this: Pace yourself. Nathan is the epitome of this mantra: a lingerer of the eyes; slow to fuss; happy to just be. I considered myself a natural pacer. My sport was distance running. My hobbies are ones that require patience, repetition, and time. I'm indecisive. In. The. Most. Pain-staking. Way. (My husband is laughing, also in a pain-staking way). If not pacing myself, every ounce of me seems to lend itself toward the, ahem, slow. I thought my patience suited me to being crafty with Audrey, rolling with the punches (or paint-splattered clothing, play-dough matted rug, whatever the case may be) of creative living, so to speak.

And, then there were two. Turns out, I don't move as slow as I thought I did. Nothing points this out quite like adapting to the unexpected schedule of living with a baby and toddler while attempting to do creative projects with said toddler. I have been planning a Button Day. Several weeks ago, a friend emailed me a recipe for Button Cookies. They sounded yummy - and adorable. My wheels began turning. Why not have a yummy adorable day - a Button Day - filled with button-inspired crafts? Audrey and I would make cookies and play with the different textures and sizes of buttons. What could be more simple?

Apparently, a lot of things. I've been attempting to pull off Button Day for a week and a half. But things pop up, people pop in, and Button Day gets put up on the shelf for another day. This weekend, I decided that Button Day was going to happen. I pulled out the recipe. I realized I didn't have shortening. I didn't feel like running to the store. I got online and found an alternative no-shortening-required recipe. We made the dough. Then, we decided that Audrey was too tired to stay up to her normal bedtime and we put her to bed early. The dough got refrigerated for another day.

We baked the cookies Sunday. They were adorable. Audrey chose to make them orange and brown, after I told her I didn't have black food coloring as she requested (blame the color choices on her near Halloween-baby status). Audrey says they were yummy. They are harder than I like my sugar cookies, so I haven't tried one. The dough was a bit dry and crumbly, making it hard to roll out. But the manner in which Audrey used a straw to create four buttonholes here, a randomly-placed three buttonholes there, was perfect. I'm eager to try my friend's original recipe for Button Cookies Round Two.

As for the button craft? We're still waiting for our moment. This might just be a Button Week. We've got a new mantra. We're pacing ourselves.
Posted by kristin at 7:47 PM