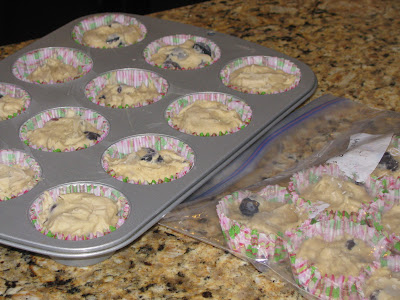 Sorry if my absence yesterday had some of you wondering if we had made an early trip to the hospital to welcome a new little guy. Nope. Not yet. This mama just took a little break, well, from blogging, at least. Jason spent the day home from work, under the weather and slightly concerned about the onset of some major backaches I've been having this week. I busied myself with a run to the pharmacy, which inspired some grocery shopping (the grocery store being connected to the pharmacy), which inspired a day of future food preparation.

Last month, I picked up The Best Make-Ahead Recipe cookbook by the editors of Cook's Illustrated. I had read about it online, and ran into the bookstore one day in a rush to nab the book to devour its pages later, with intentions of making the included recipes to devour later as well. I took advantage of Jason's time off for Thanksgiving to start preparing and creating a little freezer meal stash. Yesterday, with Jason home on the couch and Audrey wanting to snuggle against his legs and watch a movie, I decided to add to the stash.

Winds gusting at 30-50 miles per hour outside, and my All-American boy huddled on the couch inside, the All-American Beef Chili seemed in order. I halved the recipe and we still had enough for dinner and a quart-sized ziplock to throw in the freezer for later. I have never seen chili quite so thick, so I whipped up some rice, put it in our bowls first and served the chili on top. A side of our favorite corn muffins (recipe here) and I was on to another make-ahead recipe.

More muffins. The cookbook has a recipe for Anytime Muffins, including Apricot-Almond, Cranberry-Orange, Lemon-Poppy Seed, Banana-Pecan, and Blueberry variations. We had everything on-hand for the blueberry ones. You whip up the batter, pour it into muffin tins (or they suggest paper-lined muffin tins for easy freezing), wrap in vegetable-oiled plastic wrap and pop the tin in the freezer for 6 hours. After frozen, the muffins can be popped out of the tin and stored in plastic freezer bags. To bake, just pop them back in the tin and put them frozen into the oven. Easy peezy. Who knew? Want to try them? Jean at The Artful Parent has an abbreviated recipe here.

The muffins and chili got added to our freezer stash of other make-ahead recipes from the book: Creamy Chicken and Rice Casserole with Peas, Carrots, and Cheddar and Chicken Enchiladas, along with some of my lasagna and a couple quarts of our favorite vegetable soup (recipe here - we love it with the corn muffins mentioned above). I was hoping to build more of a stash, but we'll have to see what time allows (my daydreams are always more ambitious that reality seems to allow).

A couple notes on the cookbook, for those of you thinking of running out to get a copy. Once home studying the recipes, I noticed that this project was going to be a bit of a time absorber (the kind of project you wish you had a six-burner stove for - we have a two-burner stove). Many of the recipes call for long cook times (the chili was an hour and 45 minutes, which is enough to give my former commitment-phobe self a bit of pause). But most of the recipes serve 6-8 people. When I made the casseroles, I was able to make one for dinner that night and one to freeze. So it may not save you as much time on the front-end of the food prep as it will on the back-end. Also, several of the casserole recipes call for heavy cream. We tend to cook a little on the lighter side here. In the future I may play around with some of the heavier ingredients and see how the recipes turn out, but for now, I just stuck to the cookbook. So our meals post-baby, while a little less stress-filled, might be a bit more fat-filled. We might put on twenty pounds.

Today, Jason is back at work, and while we tried to clean up from my cooking excursion, a sink load of dishes awaits. I would love to say that everything is going to be spic-and-span in a matter of minutes, but I have 4 dozen cookies and some banana bread to bake for tomorrow (luckily the cookie dough is already frozen in the fridge). And as much as my instinct tells me to order pizza tonight, the fresh layer of snow on the ground, sinus-pressure-filled husband, and little aches that send me searching for comfort nag at me that this is a chicken noodle soup sort of day. Hopefully, my little helper feels like donning an apron today. But right now all she wants is to have me read a book about giving a cat a cupcake. Duty calls.
Posted by kristin at 8:21 AM