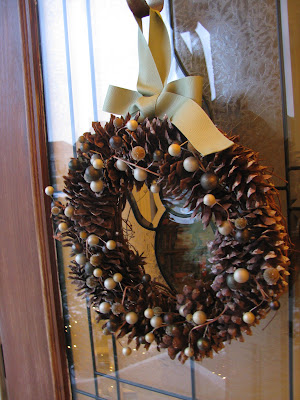 For those of you on baby-watch, no I did not take my hot glue gun to the hospital. I have my multi-tasking limits and a rather practical husband who would, at the very least, raise an eyebrow to such behaviors (I did, however, take this picture while talking on the phone, which might explain a little about its, ahem, quality). Realizing that we would not be spending our day at the hospital, I decided it was time to get a holiday wreath on our door.

Sometime last year I picked up a grapevine wreath for around $3. I kept thinking I would get around to making something to dress up our doorway. I didn't. Instead, I found odd-shaped (made just for hanging on doors, etc) galvanized buckets with handles, filled them with objects (evergreen sprigs, fake berries) and hung them from our rather weathered wreath hook.

In November, Audrey went on a little pine cone (or snow cone, as she called them) hunt at my parent's house. Remember this? This was the first year my parents' evergreens produced pine cones and Audrey amassed quite the collection. Some of them found their way home with us, and my mind drifted back to the bare grapevine wreath.

Fast forward and month and a half. Armed with a glue gun and a pocket of time, today I dug out the grapevine wreath and Audrey's pile of pine cones. I had thought gluing pine cones to a wreath would be a simple, fast project. I was wrong. Pine cones don't like to stick easily to the inconsistent surface of twisted grapevines. I improvised. I grabbed some dark brown felt. I glued the felt to the back of the pine cones. Then, I glued the other side of the felt to the wreath. It was still tricky getting multiple points on each pine cone to stick to the wreath, but this method worked much better. (Tip: cut out all of your felt pieces before touching your pine cones to prevent sap-covered sewing scissors).

Of course, I ran out of glue three pine cones short of finishing and had to run to the store. Glue retrieved, I tied a piece of ribbon (I believe this ribbon was one I had saved from the top of gift I received at my baby shower for Audrey. Like the wreath, it was sitting around waiting for the perfect project) in the bare space on the wreath before filling in the last three pine cones. Pine cones secure (or what we're going to call secure and hope for the best) I dug out some of the fake berries from my "throw some berries and greenery into a bucket and call it a door hanging" adventures and separated them into small sprigs. I tucked the springs between any holes where pine cones refused to snuggle up as close to their neighbors as I wished they had. I didn't glue these into place just in case I decide to attempt to use this as a multiple occasion wreath. I might take the sprigs out and swap in some dried red leaves for fall, etc. In the meantime, for the price of a handful of glue sticks (about a dollar) and a $3 wreath that has been sitting around bidding its time, we've added a little holiday cheer to our door. Not too shabby.