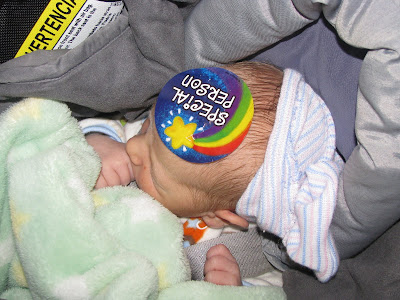 Audrey spent the days prior to Nathan's birth safely tucked away at my parents' house, so we (thinking he'd come a few days early like his sister) would be able to head the opposite direction to the hospital at a moment's notice. Nathan is clearly not his sister. He has his own clock, and a few days early was not on his agenda. So Audrey waited (wondering why we hadn't come to pick her up yet), we waited, and Nathan waited, until we found ourselves at the doctor's office on his due date performing a stress test to make sure everything was coming along just fine.

As we sat for the stress test (during which I had 5-6 contractions, of which I felt one), we found out about the holiday birthing schedule (if delivering on the 22nd or 23rd, proceed to Hospital A to be delivered by Doctor C; if the 24th or 26th, proceed to Hospital B to be delivered by Doctor D; and if we hit lucky 25, the hospital and doctor would change depending on the time of day). Meanwhile, Audrey was busy putting a pair of pajamas on a doll. The doll properly dressed for a nap, she informed my mother, "Her belly hurts. That baby has been in there too long." Apparently, we were all on the same page. Wishing to avoid a holiday game of musical doctors/hospitals, and taking into account that mild contractions had already started, we decided to book a room at the hospital and have a baby.

The plan was to break my water at the hospital and induce using pitocin. I'll let you in on a little secret. I'm a bit of a chicken. I could put a brave face on it and tell you that the thought of chemically inducing a baby gives me pause. What it actually does is make me tear up in the car and wish I were the type of person who thinks to carry Kleenex. Epidurals scare me even more. Aside from my trust issues involving complete strangers, enormous needles, and their proximity to my spine, I have a sensitivity to anesthesia. And while an epidural and anesthesia are not the same thing, I have a funny feeling that the two of us might not mix.

My feelings must have leaked out through my face. My doctor broke my water at seven, but said she'd wait a couple hours to see how I progressed before starting pitocin. Nathan did the rest. Apparently, once he decides to make an appearance, the boy makes an appearance. So in just over three hours, before pitocin or an epidural could be administered, before my doctor could get back to the hospital to deliver him, and almost before the nurse could say, "You have to get your wife back to the bed," he was here. I love this boy. 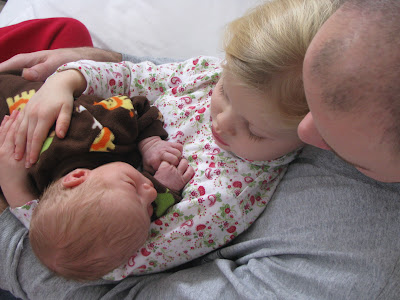 And now we're home, recovering nicely (which seems to happen pretty quickly with such a short labor). As for Audrey, aside from some initial disagreements concerning his name - apparently, she informed the guests at a Christmas party that we were naming him Wilbur and later carried on a fairly heated argument (on her side) about it with her aunt - she's handling the big sister role with gusto. Every once in a while we have to stop her from trying to do too much - from squeezing too tight. But the excess of love she has for him, well, it's what you hope for any sibling. The top picture may say it best. I turned from hanging up my coat to find him branded a "special person." Yes, I think we're going to do just fine.

~As for Wilbur, we finally convinced Audrey to call her brother Nathan (or "Naphin," as she pronounces it) after telling her she could name a doll she received for Christmas Wilbur. As for what she called the second doll she received? Charlotte, of course.