This Week's Meals Brought to You by the Herb Basil 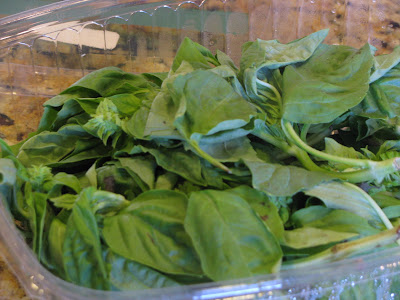 I had plans to make pizza (sauce included) last week. So while at the store on Wednesday, I stopped by the produce aisle for some basil. Of course, being April Fool's Day, the joke was on me. My only basil choices were a teeny tiny .6 ounce container for $1.99 or the rather large 4 ounce container pictured above for $3.99. Coming from a family who makes shopping in bulk for the sake of a bargain look like a sport, and finding it hard to resist all those fresh green leaves, I opted for - well, you know.

So just how did we use up 4 ounces of basil before it turned into a rotting mess in the fridge? Here's a recap: 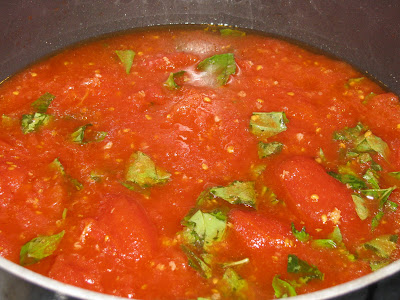 First, we used "The Quickest Tomato Sauce" recipe from Jamie Oliver's Jamie at Home for pizza sauce. I keep checking this book out from the library. With little antidotes, such as how he sneaks onions into his wife's food who is convinced she is allergic, and descriptions like "when your onions and leeks are lovely" (don't ask me what this means, but it sounds, well, lovely), this is a book with which I can curl up on the couch. [The pictures and notes on how he grows the vegetables used in the cookbook give me the slightest bit of garden envy.] The pizza sauce was great, an excellent way to kick off our basil extravaganza. Unfortunately, I am not a sauce quick draw, and regardless of what the title of this recipe indicates, I've yet to make this sauce quickly. 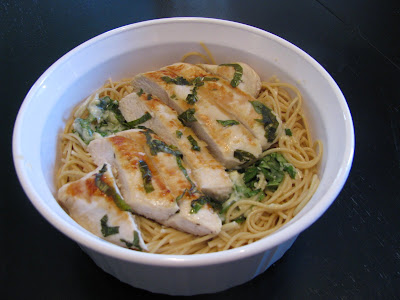 On Friday, I made a dish based on this recipe for Basil Grilled Chicken by Paula Deen. We used all the same ingredients, but I didn't measure anything out, instead using the toss-a-bit-of-this-and-a-pinch-of-that method. Per normal, I made too much pasta, or too little sauce. But we were still fans and ate the leftovers the next day. Something tells me my husband and Paula Deen would get along just fine. 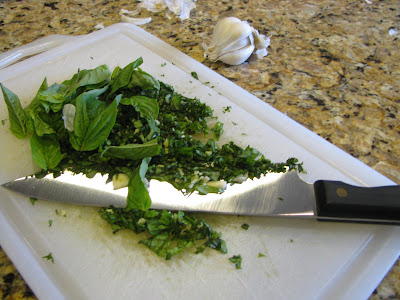 Yesterday, I used up a heap of the basil making pesto following the How to Make Pesto Like an Italian Grandmother recipe from the blog www.101cookbooks.com. This recipe involved me brandishing a large knife for about fifteen minutes, which gives me about the same satisfaction as wielding power tools. That, coupled with the daydream of cooking like an Italian grandmother and I was a happy girl. I had heard about Heidi Swanson's blog before (which focuses on vegetarian and natural foods recipes), but this was my first visit. It won't be my last. 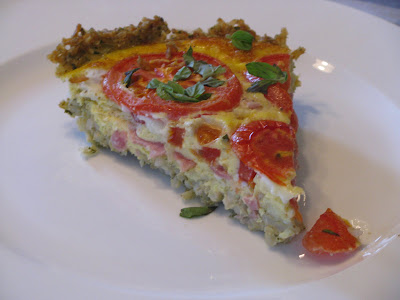 As soon as the pesto was finished, I opened the April 2009 edition of Cooking Light and got to work using 2 tablespoons to make an Italian Tomato Tart. I used real eggs instead of an egg substitute and Canadian bacon we had on hand rather than the prosciutto. In a happy coincidence, my friend Jill who had just returned from her honeymoon in Spain and Italy, called as I was making this. So while I had my own Italian adventure, I got to hear about her escapades touring the Cinque Terre. As for the Italian Tomato Tart, we found the flavor to be good, but after two pieces each, we were still hungry. Jason thought it needed side of something, like hash browns. I opted for a side of hot chocolate.


So there you have it, how to use 4 ounces of basil in six days. Of course, we still have some leftover pesto in the freezer. I guess another basil recipe is in our future. But tonight, I might let someone else do the cooking.