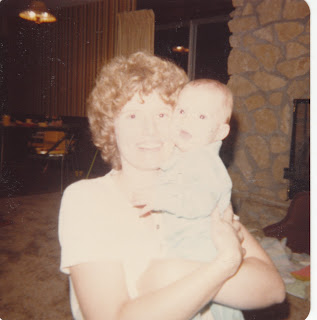 The first time I read The Runaway Bunny as an adult, I chuckled as I thought that Margaret Wise Brown must have known my mother.  In the story, a bunny wants to run away, but his mother makes it impossible saying that no matter where he goes, she will follow him because he is her little bunny.  The bunny thinks of every creative means of escape possible (becoming a trout, a rock, a crocus, etc.) only to find his mother's ingenuity thwarts his plans (she threatens to become a fisherman, a rock climber, a gardener, etc.).  The bunny, outsmarted and exhausted, concedes and decides to remain his mother's little bunny.  She rewards him with a carrot snack.

Forget What to Expect When You're Expecting, I'm pretty sure that The Runaway Bunny was my mother's parenting manual.  She was going to be there, no matter where I went, no matter what, even if I turned into something much less lovely than a crocus.  And she was bringing snacks - lighter on the carrots, heavier on her infamous cowboy cookies.

Granted, I wasn't as eager as the bunny to run away from my mom.  She let me sculpt creations from mud piles and stomp in the nearby creek while she lined the kitchen floor with newspaper so I could be welcomed back inside at the end of the day covered in a second skin of dirt.  She also stocked the freezer with popsicles and ice cream.  But even the most satisfied of bunnies can be lured by a golden carrot - or in my case, unattained adventure.

I dreamt of walking myself to school.  My elementary was a mere couple of miles from our house, but my parents insisted my sisters and I ride the bus.  One afternoon, I dawdled enough to "miss" the bus ride home.  Exhilarated, I began the walk.  I made it a quarter of a mile before the county extension director who ran the local 4-H program pulled up beside me and rolled down his window.  "Get in the car, young lady," he said, "your parents wouldn't want you walking home by yourself."

He drove me the rest of the way home, and like that little bunny, I decided it was too much trouble to go against my mother's wishes to try to walk home from school again.  My mother hadn't even had to turn herself into a rock climber or a gardener or the wind.  She had created a much more powerful tool: a village.

My mother is a superwoman of a mom, a lady who does many things well.  Most likely, she could have gotten by without a village.  But she gave me one of the greatest gifts she could when she cultivated those relationships and showed me the uplifting power of community.

I remember being a wisp of a child, standing in the ocean holding onto the arms of my neighbor whose daughter was like a fourth child in our home.  The sand shifted beneath my feet and the waves buoyed me up and down.  Had she let go, I knew I would be swept away.  But I felt safe tethered to this other mother.  She was part of my village.  She would keep me anchored to the ground, just as all those in my mother's village did.

My mother could have tried to do it all, but it was such a gift that she didn't so I could learn to go out and become part of something bigger.  Yet, thanks to her groundwork, no matter where I went, there she was: in the elderly single neighbor who taught me to make homemade noodles and how to use snapdragons as puppets, in the 4-H leader who taught me to sew, and in the advice written in a blank book by her best friends when it came time for me to become a mother.  No matter where I traveled she could follow (as a homemaker, a gardener, a seamstress, a counselor), because she had built a strong, wide village.

On Mother's Day I find myself thinking of all women: those blessed to spend the day with their mothers and babies, those mourning their mothers and babies, those dreaming of a relationship with their mothers and babies different from the relationships that they've so far known, those who were told they weren't good enough to raise their babies and who falsely believed, those who long for children they fear they will never have, those who chose not to have children and want others to see they are enough just as they are, those who are raising babies they never thought they would be because tragedy struck, those who are raising babies alone and feel overwhelmed with love and fear over the enormous job before them, and those who are raising babies with someone but still feel alone on the job and unseen.  I think of all of you on Mother's Day.  I wish you a village.  A village like the one my mother built for me with open doors and open hearts where the cowboy cookies and hugs are passed out freely - where everyone feels seen and heard and anchored to the ground, even when standing in shifting sand.


P.s. Mom, thanks for following me around everywhere I went.  I mean, thanks for the village.  I love you.  And your cowboy cookies.  And that you never kicked me out of the house for being too dirty.  Can I walk home from school by myself now?