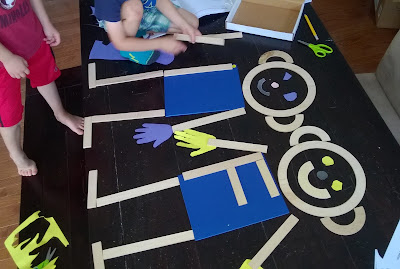 We started back to school this week.  Our house is a flutter with fresh notebooks, pencil shavings, and Handwriting Without Tears'® Mat Men™.  Tuesday, the big boys created their own Mat Men™ using the wooden pieces and mats that they will typically use to build the letters they're learning to write.  This exercise soon translated into drawing their own versions of Mat Men™ using crayons and paper.

The boys began giggling.  "Mom, my Mat Man™ is peeing a rainbow!"

Sure enough, Nathan had drawn a picture of a Mat Man™ taking a rainbow whiz.  I may have briefly imagined my delinquent children being paraded through the neighborhood as other, more sound mothers shook their heads and breathed sighs of relief, while ushering their children onto the school bus and away from my homeschooled flock.  Then, I realized that my kindergartner had drawn his stream of colors in the correct order of the color spectrum.  I'm calling it a win.

Life is like this with a bundle of boys and one outnumbered little girl.  It's not mornings of French-braiding each others' hair while singing songs about world peace.  It's much more colorful.  It's peeing rainbows.

Jason had returned from a business trip.  He told Jack that he had missed him and asked Nathan to tell Jack what "missed" meant.

Nate: It's the water that comes out of the hose.

Jason was eating peaches at lunch and talking about how much he would like a peach tree if we had a bigger yard.  The kids began talking about wanting trees to climb.

The boys woke up.  I heard them shuffle to the bathroom.

Jack: I don't want to pee at the same time.
Nate: Then, I'm peeing first.
Jack: (muffled whining)
Nate: Fine, you pee first.
Jack: Don't pee on top of mine!  I DON'T WANT YOU TO PEE ON TOP OF MINE!

At dinner, Jason turned to ask if I wanted to watch a television show we'd been catching up on.

Jason: "What About a Boy" tonight?
Audrey (terrified): You're having another boy tonight!?

Nathan was eating a bagel under a blanket in an attempt to hide it from his little brother.  Apparently, the blanket looked like a barn to Jack.

We were traveling in the car and Jason and I both said, "Just Jack!" mid-conversation (me with jazz hands à la Sean Hayes).

Audrey answered, "When someone throws a fit."

Jack saw a diaper box with a picture of a baby on the front.  "Is that our baby," he asked.

Audrey: Did you know Laura Ingalls liked wolves better than cattle?
Me: I didn't know that.
Audrey:  I guess she really didn't like cattle.

Audrey to Nathan: You don't have to be so bossy like that.  You're not Dad.

Jack was telling me a story about a bear chasing rabbits and planning to eat them.

Jack: What should the rabbits do?
Me: Run away?
Jack: Yell, "Eat more chicken!"

Nathan told Audrey that he wants to have ten babies when he's a dad.  Audrey told Nathan that this kind of thinking is ridiculous, since even if he was holding five babies, there would still be five that his wife would have to hold.  (Somehow, it must have been implied that all ten were babies at the same time.)

Audrey went on to tell him that all ten babies would cry at the same time.  He replied that he would give them pacifiers.  She insisted that not all babies will take pacifiers.  "Besides," she said," your wife will be worn out.  Mom's already had four." (Clearly, I wasn't a bundle of pep after four babies.)

Nathan woke up and came into my bedroom, followed by Jack.

Nathan: I want to go downstairs.
Jack: I want all the things Nate wants.

I had asked Audrey to get dressed while I put Ethan down for a nap.  I came downstairs to find a half-changed, half-pajama-clad Audrey.

Me: I thought you were going to get dressed.
Audrey: Oh yeah.  I forgot because I thought of something awesome!

Nathan asked if he could have a treat after eating breakfast.  "No, you're not getting a treat right after breakfast," I said.

After lunch, Nate again asked if he could have a treat.  "Why don't you get dressed first," I said.

When Audrey began brushing her teeth, I came up with a little toothbrushing song.  I set it to the music of "Shake Your Groove Thing" by Peaches and Herb.  (I'm not sure why I feel the need to set made-up children's songs to disco.  Some things are a sickness that cannot be helped.) This song has been used in an attempt to encourage proper toothbrushing from each subsequent child.  On this particular morning, I was singing it to Jack.  He stopped me cold.

"No, mom.  I want "Somewhere Over the Rainbow."

Jason was off playing a computer game called Civilization.  I was looking for him.

"What is Dad doing?"

Jack asked me how to spell his name.  I told him and he repeated it.  Then he yelled proudly to his sister, "Audrey, I spelled myself!"

The boys pointed out to Audrey that Jason had installed a baby gate in front of the stairs.

Audrey: You guys don't have to tell me how to climb the gates.  I've been through it all.  I've been climbing these gates since you were babies.

Jack: Stop, Ethan!  My eyeballs are not toys!

Audrey was singing a made-up song to Ethan.

Audrey: I love you, my stinky Valentine.  You are my brother, so we love each other.  I'm glad you'll always be mine.
Jack: Until one of you die.

Jack was misbehaving at the table.  He had asked for toast, which I had made him.  I told him if he didn't listen, I'd never make him toast again (because, apparently, I believe in threats I can't possibly keep).

Nathan: Do we go to church today?
Jason: Tomorrow.
Nathan: So the mail comes today.  I was wondering that.
Jason: Wonder no more.
Nathan: I can still wonder things!

Our three big kids had been playing at a neighbor's house.  Jack had walked back early.  The neighbor walked Nathan home later.  As they walked, she asked if he was sure that Jack had already come home.  Nate said, "I think he went home, because Dad is working in the backyard and Dad is his favorite, and he's not even the one who gives us the food!"

We had chicken noodle soup for dinner.  Jack didn't want to eat his and asked if he could go out and play.

Audrey: I just think it would be funny if you got a gift from someone and it wasn't even close to a natural holiday.

Me: Do you mean national holiday?

We were eating picnic-style at Vacation Bible School.  Jack looked up at me and said, "Even sitting down, you're bigger."


That's life with a bundle of boys and one outnumbered little girl.  It's figuring out what the world, and words, mean.  It's finding out what you, and possibly your brother, want.  It's about squeezing the most out of your days, because, as one four-year-old keeps reminding us, we're all going to die one day.  It's about loving, and arguing, and arguing about love.  It's about appreciating the rainbows. Where ever you may find them.