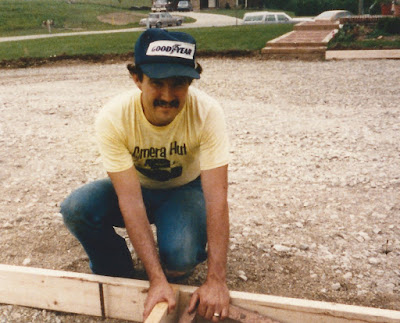 I might have been eight when the foundation was poured for the property that became the gray house on the perfect-for-pencil-rolls hill.  One of my early memories is of "camping out" in sleeping bags on the would-be dining room's subfloor when the house was still raw and open to her bones.  That first night she was hard to the touch and smelled of dust.  She felt like a mystery: able to splinter or become something else.

My father and a crew began to fill in her empty spaces while I (and sometimes my sisters) conquered the mud mountain the excavators had left behind in our new backyard.  I shaped the mud into the faces of animals (mostly pigs).  He shaped the house.  Dad covered her bare places with dry wall, tar paper, and shingles.  Where she lacked shape, he added rectangles and squares with oak.  When he had finished, he turned her over to all of us.

We grew - a house of three little girls, each amazed at the thought of possessing a room of her own (and her own phone jack). We left hand prints on the windows and smudges on the fresh paint.  We scuffed the floors and scattered our shoes among the rooms.  As our parents found them, they'd place them on the bottom steps to be carried up to our rooms later.  We found spaces, like the handcrafted dollhouse or sandbox (both built by Dad), in which to play together, and other times, we came apart.  Sometimes, we abused the wooden steps and slammed our bedroom doors.  Dad, steady as the house, taught us that some things can take a few smudges and still come out clean, while other things, if disrespected, will come apart.  He rarely raised his voice, but I am sure there were times my father found us to be a mystery: able to splinter or become something else.

The hand prints on the windows grew larger and the shoes on the bottom steps grew in size.  In the summers, rounds of "I Think We're Alone Now" or "olly olly oxen free" rang from the bricked front porch, which doubled as stage and home base.  When I craved solitude, I climbed the block shelves of my closet until I reached the top, where a pillow, pile of books, and flashlight were stashed.  When I needed solace, I stepped onto my window seat, popped the screen from my window, and climbed out onto the roof.  Sitting on the rough shingles, I'd tuck my knees to my chest and hide inside a cloak of darkened hickories and oaks, a thousand chirping crickets, and a million burning stars.  One small girl rambling to one big God.

The roof.  The window seat.  The porch.  The top shelf.  My father built them all.  They built me. They became the building blocks on which I played and fell and healed and grew.  Dad drew the first set of blueprints, outlining what a life should look like - that you should build something for someone else.  He sat across from the girl he had built and told her that she could do great things, and the only person who could stop her was her.  He played catch with her in the backyard, and ran next to her while cheering, and whispered in her ear on the dance floor at her wedding that she was dazzling and people watched her wherever she went.  And, the little girl knew that she would not splinter.  She would become something else.

A man's blueprints and hours of manual labor built a house.  The man he was, built a home.