This year, I received an early Christmas present. It came in the form of a phone call from my little sister saying, do you know what you're getting Mom and Dad for Christmas, because I have an idea. Her idea was simple, sentimental, and perfect for all the grandparents on our Christmas list. It was practically wrapped in a shiny red bow. I performed a happy dance (well, in my head I performed a happy dance, being too exhausted or busy pulling jumping children off of couches or both to physically muster said happy dance). Then, I crossed "fretting" off my to-do list and replaced it with "make garden pavers". Then I did nothing, for weeks, until Jason finished up his traveling for the year and took a two-week vacation, at which time I began frantically searching the internet for DIY garden paver tutorials. I found this. I prayed it would be as simple and straightforward as the directions made it look, because our margin for error was narrow. I could count the days until Christmas on one hand. I tell you, the man's a genius. Here's the process, in a very condensed nutshell: 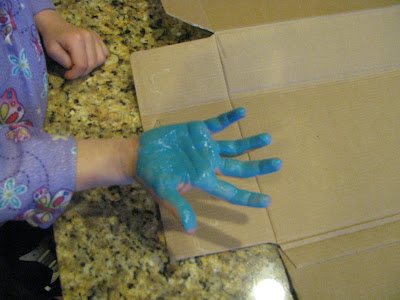 First, we put poster paint on each child's right hand and made a print on the back of a cardboard cereal box. This is brilliant - 1) it takes the stress out of worrying if the child is going to scrunch his fingers into a ball in the concrete rather than make a flat handprint, and 2) you can do this with multiple children in rounds (we did Audrey's while the boys slept, then each boy on his own after he woke up) and then get your concrete mixed and poured all at once (after the children are in bed!!). 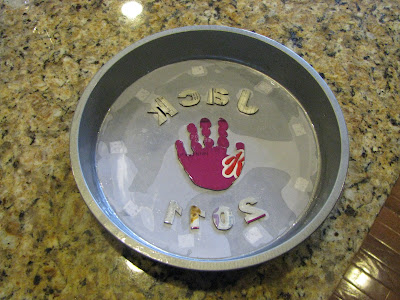 Second, you line the bottom of a cake pan (we had a few slightly rusty ones, just waiting for such a project, on hand and then bought a few more for a couple bucks) with a piece of paper. Ours is taped down with double-sided tape. On top, tape or glue down the handprint (that you've cut out of the cardboard) and any names or dates you want to include, assembled in a backward-fashion so that it appears the right direction when viewed in a mirror. Brush the whole shebang liberally with vegetable oil. 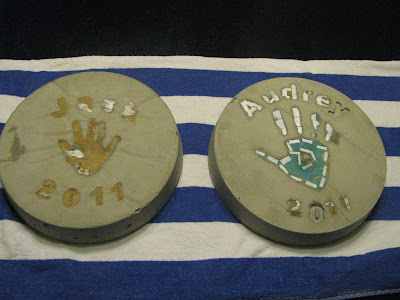 Next, mix and pour your concrete into the cake pans. Let them set at least overnight (possibly two days if you don't procrastinate and wait until the last possible second to attempt DIY projects for your relatives at Christmastime). Take the hardened pavers out of the pans. Peel any cardboard pieces from the concrete that might have stuck during the drying process (note: ours had most of the cardboard pieces still in the pavers when we took them out, but they were easy to remove). High five your spouse with exuberant disbelief at how well they turned out. 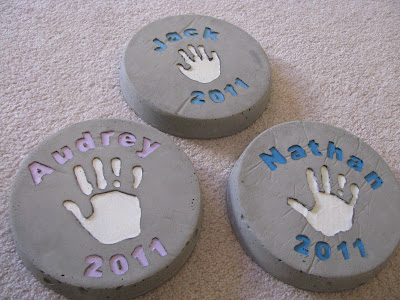 Finally, paint them with an outdoor patio paint and (after that dries) seal them with a coat or two of poly urethane. Marvel at your children's odd handprints. Stack the pavers up with a circle of felt in between each, wrap a pretty bow around them, and lug them to your family's Christmas celebration. Promise that you'll make a set of your own when it's warmer outside and you've had more sleep and you've figured out what you're doing with your backyard. High five your spouse some more, just because it feels good.
Posted by kristin at 4:39 PM