For Posterity's Sake: Week in Review 124 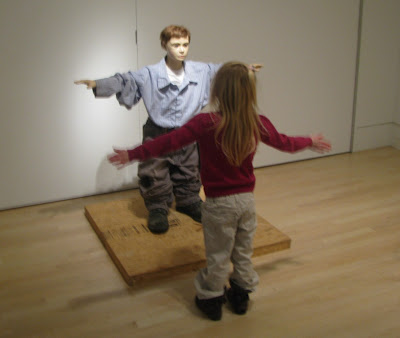 photo from recent visit to the Indianapolis Art Museum


Friday, before going to bed, Audrey asked that I keep the doors unlocked - just in case Peter Pan stopped by. She had tucked Peter Pan into her library tote during our last visit, and she and Jason spent several toasty nights curled into a nest of pillows and blankets by the fire reading the chapters before he left for a week in Brazil, requesting that we not finish the book while he was gone.

By Friday, Audrey was sure Peter would make a house call. I fielded questions regarding Lost Boys and the degree to which they were lost and the nature of jealousy in women, particularly mermaids and fairies. I couldn't help but feel stung by irony as my little ones begged for more chapters (against their father's will) about children clinging double-fisted to their youth as mine proved daily how hell-bent they are to grow-up (dragging me, clutching their suddenly-too-short pant legs, in their wake). Irony is ageless. My little ones, however, are leaving Neverland behind.

Our stories from the week past:

Nate is growing his vocabulary. His latest additions include "Love, love, love" and "moose" - so far, not used together. But regardless of any verbal limitations, he seems to get his point across just fine. Early this week I was awaken by the little man standing by my bedside. He was playing his castanet. I opened my eyes. He handed me my cell phone (my version of a watch) and my glasses. Point made.


Tuesday night, I set the security alarm. Wednesday morning, Audrey beat me downstairs. The alarm was bleating a siren's yell before I hit the bottom step.

"Who was trying to go outside?" I asked after disarming the alarm.

"I wasn't trying to go outside," Audrey said. "I was just letting a bug out. I didn't kill it. It was just a baby bug and I was wanting it to have a little of a life."


Thursday, I came downstairs from putting Nate down for a nap to find Audrey playing dead.

"When you came down, I was pretending I was dead," she said.

"Because if you were dead, I wouldn't be able to play with you or hug you again."

"You could still hug me," she said. "I just wouldn't hug you back."


Friday morning, Audrey (once again) put her boots on the wrong feet.

"Your boots are on the wrong feet," I said.

"I always put them on the wrong feet," she said, sighing audibly.

"And someday, you'll always put them on the right feet."

"And then I'll get tired of that?" she asked.


Jack, for his part, tries to sneak out the baby gate; if successful, tries to sneak up the stairs; tries to sneak his brother's sippy cup and the crumbs that drop from the table; and is sneaking closer to being a boy and less of a baby every day. It's troublesome. It leaves me itching for some pixie dust - and a visit from Peter Pan.
Posted by kristin at 4:33 PM